On Stories and Science, Plus Fish

It's probably fair to say that people, when afraid, turn to stories and to science for solace. The last year and a half has solid­ified that: the yarns spun range from cons­piracy theories to escapist novels that tran­sport the reader far, far away from bleaker realities (The Midnight Library phen­omenon, anyone?), and evidence of new­found public interest in science mani­fests in signs like the spike in world­wide Google searches for "poly­merase chain reac­tion" and August's announce­ment of the new collaboration between the Alfred P. Sloan Foundation and the National Book Foundation to en­courage engage­ment with science in liter­ature. 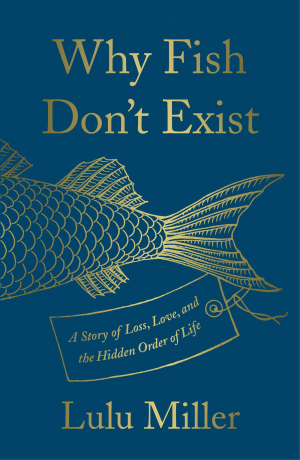 On that note, I recently read Lulu Miller's Why Fish Don't Exist. It's an amal­gam of a book that's part memoir, part bio­graphy, part philo­sophical musing, part bildungs­roman, and part murder mystery, with tidbits of science all through­out. It's about the author's personal life, some marine biology, Darwinian theory, a look back at historical heretic scientists, and the story of David Starr Jordan, the very prob­lematic ichthy­ologist who discov­ered nearly a fifth of the world's known fish species. Not to mention some cyano­bacteria appre­ciation.

Weeks after reading it, I'm still thinking about it. Maybe it affected me so much because of the ongoing pan­demic milieu. It's about being small but secure in the world (like microbes!). It's not about means to various ends – a welcome lull in all of the mat­erial and teleo­logical nar­ratives in modern life. It's thought­ful, it's sober­ing, it's right­fully messy, it's vis­ceral, it's sad­dening and some­times unfair, and it's also up­lifting. Most of all, I read it as an ode to curios­ity. Admit­tedly, I would have appre­ciated more of a dis­cussion about race, consid­ering that ichthy­ologist Jordan was an awful bigot and eugenics ad­vocate, but I found it to be a compel­ling story that's one facet of finding per­sonal meaning amid dis­order.

Towards the end of the book, the author has a quote from W.B. Yeats: "There is another world, but it is in this one." I love this quote. I've written it down in three dif­ferent places. It's some­thing in line with my convic­tion that after bio­logical research seeks out what makes life move, creative writing is what uncovers meaning from that for people and society. It's some­thing emblem­atic of writing, stories, imagin­ation, and science.

It says yes, there are endo­symbioses to be found every­where, and not just within cells.