What with the all the talk about CRISPR, the renewed interest in phage therapy, the wide­spread occur­rence of huge phages (to mention but a few of the reasons phage are constantly in the news these days), it's no exag­geration to say that once again in biology "phage are all the rage." After they burst into the scene to launch molecular biology, phage went into a relative eclipse period, just to explode into their current full glory (puns intended). Yet, amidst all the very exciting current news about phage, what most tickles my fancy about them is their ability to mediate hori­zontal gene transfer via trans­duction. Hatfull and Hendrix start their landmark review on phages and their genomes – published ten years ago almost to the day – with a couple of mind­boggling numbers: "there are more than 1031 phage particles in the biosphere" and "there are about 1023 phage infections per second on a global scale." While they focus on the facts that the phage pop­ulation is very large and highly dynamic, I marvel at the evolu­tionary implic­ations of 'oh so many' trans­duction events! Even if you take those numbers with a grain of salt (as well you should) and give them a leeway of a few orders of mag­nitude either way, their unimagin­ably large mag­nitude is cause for excite­ment. But I must admit, I have a very soft spot in my heart for trans­duction.

The very first experi­ments I did as an under­graduate were P1 trans­ductions. The beauty of doing those experi­ments was that they left me plenty of time to think. Why did the phage some­times make the mistake of filling its capsid with host DNA? And how did we know that those trans­ducing particles were filled with just host DNA? The search for answers led to me one of my early favorite papers, Ikeda and Tomizawa 1965, elegantly demon­strating that trans­ducing particles con­tained only host DNA.

Then I hit a wall. I tried reading the first refer­ence of Ikeda and Tomizawa's paper: Zinder and Lederberg 1952, Genetic Exchange in Salmonella. This classic, des­cribing the discov­ery of trans­duction, was a difficult read back then and remains so to this day. Fortun­ately, there are two lovely pieces that greatly aid in under­standing this discovery. First, there is Sandy Parkinson's 2016 "Classic Spotlight," that nicely explains the experi­ments and the logic of Zinder and Lederberg. Second, there is Norton Zinder's 1992 personal retro­spective of the events leading to the 1952 publi­cation. It is sure to keep you at the edge of your seat! Here are two teasers from it, both related to the 1951 Cold Spring Harbor Symposium, where his early results were presented. "If ever a science was in pre­revolu­tionary crisis (Kuhn 1970) it was genetics in 1951. The sym­posium was opened by Richard Goldschmidt, who pro­claimed that there was no such thing as a gene." "Lederberg gave a paper from our labora­tory which I believe has won all comp­etition for incompre­hensi­bility. He spoke for more than six hours." Can you really resist the urge to read it? 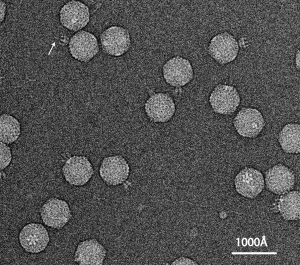 By the time Zinder went to Cold Spring Harbor in 1951, he already had results showing that a "filterable agent" med­iated recom­bination between some Salmonella strains. But exactly what was going was still a mystery. Zinder himself states: "Recall that this was all before the Hershey-Chase Experi­ment and the Watson-Crick model for DNA," so it's no surprise that the mech­anism was not readily appar­ent. But, at the meeting Zinder had a Eureka moment when Harriett Ephrussi-Taylor said that the genetic exchange was due to a phage with some DNA stuck onto it. Within a couple of months – August to October 1951, pre­cisely seventy years ago – Zinder had figured it out: Salmonella phage P22 med­iated the observed genetic exchange, the phenom­enon was named trans­duction. This also marks the birth of Salmonella genetics.

Let me sum­marize. In P22-mediated trans­duction, first the phage lyses a cell. In the pro­cess some of the lysed cell's DNA is pack­aged into phage capsids. Those trans­ducing particles inject the prior's host DNA into a new host and recom­binants form. Is that all there is? No, not at all. There is another pathway. Around the time Zinder discov­ered the filterable agent, Bruce Stocker was working on Salmonella motility and flagellar variation. No surprise that Stocker decided to visit Lederberg's lab. In collaboration with Zinder, Stocker worked on the genetics of motility using a decades-old assay: in medium containing low agar concen­tration, motile cells can swim and even­tually can occupy an entire Petri plate. In contrast, non-motile cells grow only at the site of inoc­ulation. This proved ideal to obtain motile recom­binants after mixing non-motile strains with a P22 lysate from motile strains. Flares (or swarms) of motile trans­ductants emanate out of the streaks of non-motile strains (Figure 2 top panel). Now, here's the surprise. At freq­uencies far greater than motile trans­ductants, Stocker observed trails of micro­colonies emanating from the sites of inocul­ation of a non-motile strain after it has been exposed to a P22 lysate from a motile strain (Figure 2 bottom panel). Now, reader, if you are unfam­iliar with these trails, stop reading and think about the pheno­menon for a bit. What causes it? The explan­ation follows.

In their paper desc­ribing trans­duction of flagellar char­acters, Stocker, Zinder and Lederberg 1953, from simply looking at the trails offer a mech­anism. I find their words, 68 years later, still awe-inspiring: "Many combin­ations of phage and recipient non-motile cells produced not only swarms but also groups of micro-colonies deep in the agar and at a distance from the site of inoculation (trails). These trails were generally more numerous than the swarms. The number of colonies in a trail varied from 4 to 50, or even more in plates incubated for 48 hr. Sub­culture from these colonies has yielded only non-motile forms. Yet the distance of the micro­colonies from the site of inoc­ulation, and their position in the depths of the medium, make it clear that the cell from which each colony grew must have reached the site of the colony by active move­ment. We suggest that trails result from abortive trans­duction, arising as follows: if a gene carried into an non-motile cell is dom­inant to that respon­sible for the absence of flagella, the cell will become motile; but if the exo­genous gene fails to replace the homo­logous gene in the (hypo­thetical) chromo­some, it will not be replic­ated, so that at cell division there will be produced one cell con­taining the foreign gene and there­fore motile, and one cell lacking it, and there­fore non-motile. Thus at any time there will be only one motile cell containing the foreign gene, and its path through the agar will be marked by a trail of micro-colonies growing from the non-motile daughter cells produced each time it divides." Both Lederberg and Stocker pursued this pheno­menon and by 1956 both had reached similar inter­pretations on the nature of abortive trans­duction. It resulted from non-replicated DNA from the prior host, trans­mitted through many gener­ations to a single descen­dant. 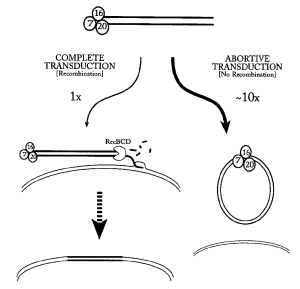 Fig. 3. The fate of P22-derived transducing DNA. While some of the DNA can re­com­bine into the genome, at much greater freq­uencies the incoming DNA from the prior host is abortively trans­duced. Source.

For decades, I have remained fascin­ated by those trails and abortive trans­duction. Recently, I thought of a possible Talmudic Question: If the incoming trans­ducing fragment must be attacked by nucleases to recom­bine, how does it survive 50 or more gener­ations during abortive trans­duction? Then I did my due dili­gence and found the mech­anism had been figured out! In 1997, Benson and Roth showed that the incoming trans­ducing frag­ment enters one of two path­ways (Figure 3). In one, the less freq­uent one, the linear fragment is attacked by the RecBCD nuclease, leading to recom­bination. In the other, by far the more freq­uent one, three phage proteins circul­arize the trans­ducing frag­ment, render it nuclease-resis­tant and non-replicating. Thus, DNA from the prior host is now inher­ited by only one daughter cell after every division.

Now comes my own epiphany on abortive trans­duction. Normally, when we think of trans­duction and horiz­ontal gene trans­fer, we think of stable recom­binants that will inherit the DNA, thus having impor­tant evolu­tionary conse­quences. I want you now to think a bit outside that box. Go back to those 1023 phage infections hap­pening every second. At much greater fre­quency than stable horiz­ontal gene trans­fer, there will be myriad cells in every microbial com­munity on Earth, carrying circles of stable, non-replicating DNA from a prior host. The pheno­type of those cells will be altered, not for all progeny but for only one cell after each division. Those cells will have the capacity to exploit new niches for many gener­ations. The eco­logical conseq­uences of abort­ive trans­duction are enor­mous! When I read micro­bial ecology papers, I've yet to come across this idea. I hope that some of our STC readers will consider explor­ing this excit­ing possi­bility.