« Why Calcify? | Main | Kimchi-Making and Microbiology »

It all started with my wanting to write a post on Frankia. I did what I always do when thinking of a new post. I googled 'small things considered frankia'. Nothing. Good start, I can dive into the topic. Next, I thought let's put Frankia in the context of prior posts. I googled 'small things considered rhi­zobium'. Nothing again. Since one cannot always trust googling, I went directly to the source. I consulted with Elio and Christoph. I rely on their collective memory to recall every one of the near­ly 1500 extant STC posts. "Do either one of you recall any posts on Frankia and/or Rhizobium?" Christoph: "Neither Frankia nor Rhizobium tickle my memory." Elio: "Not that I recall." It's high time to put the spotlight on nitrogen fixation, there is so much wonderful material on the subject. So much so, that I begin planning a "Diazomania" series in the same spirit as our Fungomania series. But first I need a short post with a few basics. Let's start at the beginning. Diazotrophs. 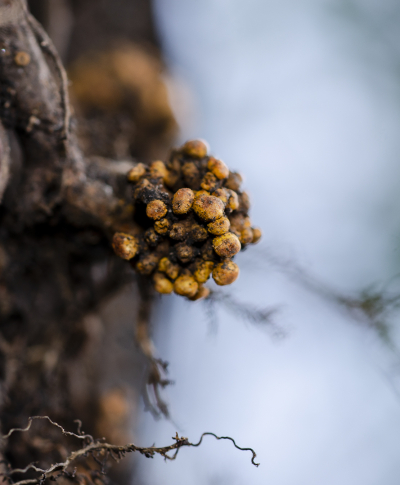 I suspect that most of our readers know diazotrophs. They are bacteria and (a few) archaea able to grow without a source of fixed nitrogen. Using nitrogenase, diazotrophs catalyze the conversion of nitrogen gas (N2) into ammonia (NH3), at the hefty cost of 16 ATPs per molecule of nitrogen. But I suspect not many of you (excepting French speakers) will know the etymology of "diazo" for two nitrogens. In French, nitrogen is "azote." Why? Turns out none other than Antoine Lavoisier coined the word from the Greek a-,"not" + zōḗ,"life" to describe the component of air "that cannot sus­tain life." Little did he know about diazotrophs! The diversity of nitrogen fixing microbes is enormous and astounding. From the free-living fixers to those that form intimate sym­bioses with fungi, plants and, yes, even some animals, they are all small marvels that I'll be considering in future posts. Here's a teaser to whet your appetite for the subject.

I wanted to write a post on Frankia. Why Frankia? Much is known about the nitrogen fixing nodules formed by the Rhizobia and legumes. Far less is known about Frankia, an Actinomycete, and its in­teractions with actinorhizal plants. In my minute efforts at reforestation, I've planted many alders (Alnus acuminata) because the local wisdom told me I should. I wondered why... In the process I discovered that our magnificent Andean Forest alders, some of them reaching 25–30 meters in height, are actinorhizal plants. Lo and behold, when I inspected their roots, I marveled at the beau­ty of their Frankia alni nodules. You'll read more about this and more in Diazomania. As they say, you live and learn!