Over the past two decades, sRNAs popped up as connecting links in regulatory chains of virtually all bacterial differentiation pathways such as virulence, biofilm formation, formation of flagella, spo­rulation, intercellular communication (quorum sensing), stress response, you name it. For com­­pleteness: the 'classical' chain links being transcription factors (including response regulators), sigma factors and nucleoid-associated proteins (NAPs). Evidence is accumulating that post-tran­scriptional gene regulation via sRNAs also affects central carbon metabolism in bacteria (see here for a review). The pinnacle of molecular tinkering with the cell's core metabolic functions, however, are the so-called "dual-function" sRNAs, "chimeric transcripts that serve as both: base-pairing ri­bo­regulators and mRNAs" as Kavyaa Venkat and coworkers from Kai Papenfort's lab at Jena Univer­sity, Germany, say in their recent study of VcdRP, a sRNA of Vibrio cholerae. 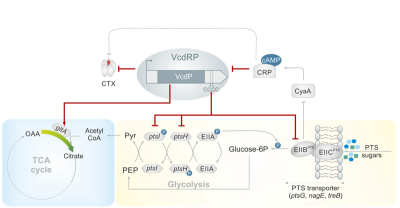 (Click to enlarge)
Figure 1. Model depicting the dual func­tion of VcdRP in balancing carbon meta­bolism. VcdRP is a dual-function regula­tor that represses CTX production in V. cholerae. Additionally, CRP and cAMP act on the regulator at the transcriptional level and suppress the production of VcdRP. The sRNA element (VcdR) acts via a conserved stretch of four consecutive cy­tosines to base pair with the trans­lation initiation sites of PTS‑specific and non-specific sugars, resulting in the inhi­bi­tion of carbon uptake. The peptide VcdP binds to and increases the activity of citrate synthase enzyme (GltA), there­by modulating the levels of metabolites within the cycle. Thus, VcdR and VcdP to­gether synchronize the carbon uptake and its subsequent utilization, thereby ba­l­ancing carbon metabolism. Source. Frontispiece: Electron micrograph of a cho­lera pathogen Vibrio cholerae (color­ized). Image: Kai Papenfort/Liana Franke (Uni Jena)

Venkat et al. found VcdRP among a pool of candidate sRNAs in a screen for inhibitors of cholera toxin (CTX) expression in Vibrio cholerae. Closer examination of the VcdRP gene for structural elements (promoter, terminator) revealed an ap­proximately 306 nucleotide-long primary transcript, VcdR, encompassing an internal open reading frame (orf) coding for a 29 residue peptide, VcdP (Figure 1). The primary tran­script is processed in vivo by RNase E to yield several iso­forms of the mature VcdR sRNA. In order to disentangle the possibly separate functions, they expressed VcdRP, VcdR, and VcdP (alone or as fusions to tags) from inducible multi­copy plasmids in wild-type and ΔvcdPR hosts. They then mea­sured, by RNA-Seq, alterations in transcript levels across the entire genome.

Indeed, pulse expression of VcdRP resulted in differential expression of 103 genes (84↑/19↓). VcdP modulated the ex­pression of 49 genes (41↑/8↓), whereas VcdR led to a change in 8 genes (2↑/6↓). Most genes regulated by either VcdP (34/49) or VcdR (7/8) were also differentially expressed in response to VcdRP. However, regulation of 64 genes was specific to VcdRP, suggesting that simultaneous expression of VcdR and VcdP could have a synergistic effect on the cell. You can see from these numbers that VcdRP is certainly not a mono-specific regulator, an on/off switch, but a rather global one, more like a dimmer.

By functional annotation of the genes differentially expressed in response to VcdRP the authors detected several genes with potential functions in metabolic processes and specifically carbon me­tabolism. Functional assays with appropriate reporter fusions led them detect a common regula­tory motif, a C quadruplet, in the 5'-untranslated region (5'-UTR) of the mRNAs of four sugar trans­porters, PtsG, NagE, TreB, and PtsHI, where base-pairing with VcdR would block the Shine-Dalgar­no sequence (ribosome binding site (RBS)) and inhibit their translation. They could confirm this inhibition by experiments and conclude that indeed VcdR acts as post-transcriptional regulator of these genes (see Figure 1 for details).

To come full circle, or better: to close the regulatory loop: Venkat et al. found that CRP·cAMP binds to the VcdRP promoter (pvcdRP) in vitro and inhibits its expression in vivo. You may recall from the regulation of the Lac operon that CRP·cAMP activates expression of the lac genes − and those of other non-PTS sugars − under low glucose levels while lactose needs to be present to relieve their repression by the Lac repressor, LacI. Simultaneously, CRP·cAMP represses VcdRP expression the­reby removing the translational inhibitor of several PTS/non-PTS sugar uptake mRNAs.

Almost en passant, you have here the explanation for the initial observation that overexpression of VcdRP inhibits CTX expression. It's long been known that the expression of a number of V. cho­lerae virulence genes, including the CTX genes, is triggered by the uptake of certain sugars. If up­take of these sugars is greatly reduced or impossible because the mRNAs of the corresponding sugar transporters are blocked for translation by binding of VcdRP, CTX expression levels remain low. Clearly, the inhibition of CTX expression by VcdRP is indirect (Figure 1).

VcdP, the small protein, interferes with carbon metabolism at different 'traffic junction'. It binds to citrate synthase, GltA, thus tuning the citric acid cycle at step 1. The exact molecular mechanism is not yet known but it seems that VcdP does not tinker with GltA levels but rather with its enzymatic activity (Figure 1). Kinetic measurements of both entry points, sugar uptake and TCA cycle, will have to be done to determine the degree of influence of VcdR and/or VcdP under specific growth conditions. So far, we just have a set list of the players. 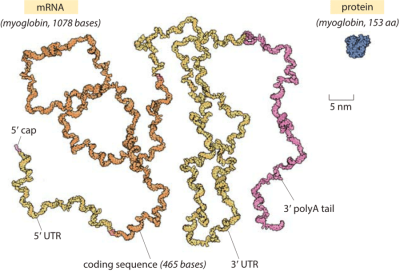 Figure 2. The relative sizes of a globular pro­tein and the mRNA that codes for it. The myoglobin protein is drawn to scale next to the mRNA transcript that leads to it. The coding sequence of an mRNA al­one is about an order of magnitude hea­vier by mass than the protein. The myo­globin protein is in blue, the 5' cap and 3' polyA tail are in purple, the 5' and 3' un­translated regions (UTRs) are in yel­low and the coding sequence is in oran­ge. Illustration by David Goodsell. Source

A side note on "small RNAs": do not be misled by their name. With a length of 50−300 nt, sRNAs are only "small" in comparison to the "large" ribosomal RNAs (E. coli 16S: 1541 nt; 23S: 2,904 nt). As a rule of thumb, sRNAs are of the same size or even significantly lar­ger with respect to mo­lecular weight and mo­lecular dimensions than the proteins they interact with. The "small" RNA of Vibrio men­­tioned here, VcdR, has a molecular weight of ~95 kDa while the repressor of pvcdRP, CRP protein, clocks in at ~24 kDa. The Bionumbers website (and book) gives another illuminating size comparison of myoglobin mRNA and the mature myoglobin pro­tein (Figure 2). To avert a misunderstanding of "small", researchers suggested the general term 'non-coding RNA' (ncRNA) for all those transcripts that do not carry signals for translation, irrespective of their lengths. But this term is not very helpful because it is − like the term "prokaryote" − a definition ex negativo, and so it squeez­es a whole zoo of RNA molecules with widely and wildly different functions under one umbrella (tRNA, rRNA, tmRNA, sRNA, gRNA (CRISPR!), microRNA (µRNA), siRNA, piRNA, snoRNA, snRNA, ex­RNA, scaRNA, ...).

Last but not least, the term 'ncRNA' does not help with VcdRP in particular, since the transcript is both a sRNA, VcdR, and a mRNA contained within, coding for VcdP. There­fore, it is best to pragmatically stick with the term "dual-function RNA" just as Venkat et al. (2021) did and focus on elucidating the various functions (Figure 1). Dual-function sRNAs are not exotic, they are found in Gram‑positives and Gram‑ negatives. But among the sRNAs they're a minority (see here for a review.)

A final note: VcdP, the 29 residue-long protein encoded within the VcdR sRNA, is really small (molecular weight ~3,200 kDa) and belongs to the size class of the smallest ribosomal proteins (L34 5.4 kDa, S17 9.4 kDa) but is still in another size class than the <10 residue-long oligopeptides used as signaling molecules by B. subtilis, for example.