I am not usually drawn to start out an article by considering a bacterium's name, but when con­front­ed with Ag­gre­ga­ti­bac­ter ac­ti­no­my­ce­tem­co­mit­ans, I had to take a pause. A well-traveled Gram negative coccobacillus, this carrier of such a convoluted moniker started life simply as an Actino­bacillus isolated together with an Actinomyces, later to be called a Haemophilus. It has been iso­lated from cases of bacterial endocarditis and aggressive periodontitis. A detailed study that used modern taxonomic techniques proposed placing this organism in a new genus, Aggregatibacter from the Latin, 'aggregare', to aggregate, and in a new species, actinomycetemcomitans, from the Latin 'comitans', accompanying (actinomycetes). Let's call it Aa. 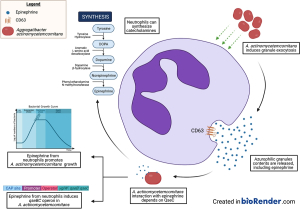 A recent study by Ozuna, Uriarte, and Demuth (just 3 au­thors!) enlarges on their previous finding that Aa acquires its needed iron by activating a two-component quorum-sensing system, QseBC. This activation depends on the presence of catecholamines, pointing to a curious interplay between pharmacology and microbiology. Where do these pharmacologically active compounds come from? Inter­est­ingly, they are made by neutrophils, which are present in large amounts in infected subgingival pocket. Neutrophils make the three main catecholamines, the well-known hor­mone epinephrine (aka adrenaline), plus norepinephrine and dopamine. Aa induces the release of certain neutrophil granules (the so-called azurophilic ones) in which epine­phrine is stored. Of note, the QseBC system is apparently also functional in E coli, including its stimulation by epinephrine.

How does Aa interact with epinephrine? Using mutants in the QseBC two component system, the authors determined that the cytoplasmic domain of the QseC sensor kinase is needed for the in­teraction between Aa and epinephrine. Beyond that, epinephrine-containing supernatants from human neutrophils promote the growth of Aa and, under anaerobic conditions, induce the ex­pression of the qseBC operon. The authors conclude: "The presented findings supply evidence towards the growing field of microbial endocrinology by contributing to the understanding of the crosstalk between bacteria and the host endocrine system. Furthermore, it expands the know­ledge of the role of stress hormones in periodontal disease and potentially other chronic inflam­matory diseases."

The article was pointed out to me by my friend and infectious disease expert Joshua Fierer. He said: "That neutrophils synthesize epinephrine got me to thinking about what function that might have for the host. Neurophils have such limited synthetic machinery, why make and release epi­nephrine when they are doing battle? Got me to speculating whether this is a way of constricting blood vessels to keep the invader localized. Someone should mutate the neutrophil pathway to see what happens."