Janie's recent Bio-Brick post, where she introduces microbially induced calcite precipitation, promp­ted me to continue on the topic. In contrast to the amorphous chalk Janie described, which is produced by bacteria from limestone, I'll be describing a very different sort of chalk. Still calcium carbonate, but with a completely different genesis. Judging by the numerous prior posts we've had on such chalk (and I'll be referring to some of them below), it seems that here at STC we have a fas­cination with the material. And who would not? Microscopic inspection of chalk reveals a stun­ning array of rounded shapes. Those shapes led Thomas Henry Huxley to name the microscopic constituents of chalk coccoliths (from the Greek kokkos - berry and lithos - stone). As I wrote be­fore, Huxley was particularly struck by two observations related to chalk which remain amazing to this day. First, chalk's enormous abundance. Vast regions of ocean floor on Earth are made up almost entirely of chalk deposits, hundreds of meters deep. Second, the coccoliths that make up that chalk are the "calcareous skeletons" of calcifying marine phytoplankton, coccolithophores. 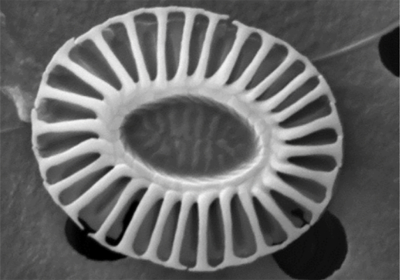 Figure 1. Coccolith from Emiliania huxleyi, about 3 µm along its long axis. Source

It is difficult not be in awe at the sight of a scanning electron micrograph of a coccolith, such as the one from Emiliania huxleyi (a.k.a. Ehux) in Figure 1. Ehux is the dominant cocco­lithophore in today's oceans and plays crucial roles in the sulfur and carbon biogeochemical cycles, as attested in this earlier post. In short, coccolithophores constitute a large fraction of the ocean's phytoplankton particularly during blooms. During blooms, almost half the carbon fixed in the ocean is due to coccolithophores. Along with the forami­ni­fera, coccolithophores are the most productive oceanic calcifiers. When their blooms collapse, largely due to viral infections, their coccoliths form a large component of the biological pump, helping drive carbon from surface waters to the bottom of the oceans. Given such enormous roles on Earth's system and their intrinsic beauty, it's no surprise coccolithophores are prime research subjects. Yet, many aspects of their biology remain poorly understood. Among the many unanswered questions are the "how and why" of coccolith formation. 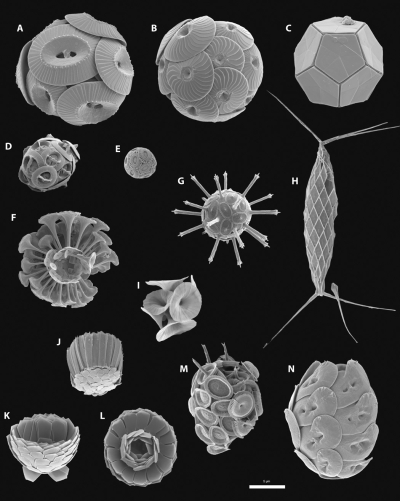 Unlike the how and why of coccolith biology, their evolutio­nary history is extremely well documented. That topic is clearly presented in a review that also tackles the more dif­fi­cult questions of how and why. In the preceding paragraph I mention Ehux as the dominant coccolithophore today. Its current dominance had led to the popular misconception that it has always been the dominant species. For example, you might sometimes read (even here in STC) that the White Cliffs of Dover – made up largely of coccoliths – are Ehux's doing. Not so. Even though it dominates today's oceans, it is only one of an estimated 200 extant species. More impor­tantly, as coccolithophores go, Ehux is like a newborn baby. It evolved a mere 270,000 years ago while the earliest spe­cies appear in the fossil record around 220 million years ago. Coccolithophore diversity increased along the millions of years until the Cretaceous-Paleogene boundary mass extinction event 66 million years ago when 90% of the spe­cies disappeared. Yet, just glancing at Figure 2, one gets a sense of just how diverse coccolithophore morphologies remain. Ehux, the reference species for coccolithophore studies, is contrasted with other species spanning extant biodiversity. The images in Figure 2 are scanning electron micrographs of cells collected directly from the open ocean. The species have such wonderfully sounding, sometimes mysterious names: (A) Coccolithus pelagicus, (B) Calcidiscus leptoporus, (C) Braarudosphaera bigelowii, (D) Gephyrocapsa oceanica, (E) E. hux­leyi, (F) Discosphaera tubifera, (G) Rhabdosphaera clavigera, (H) Calciosolenia murrayi, (I) Umbel­losphaera irregularis, (J) Gladiolithus flabellatus, (K and L) Florisphaera profunda, (M) Syraco­sphae­ra pulchra, and (N) Helicosphaera carteri. (No doubt the authors wanted to give this figure a cer­tain "haeckelian" sense.) The different morphologies show biogeographic distribution, suggesting that there is a link between a particular architecture and specific ecological adaptations. Coccolith diversity certainly makes one very curious as how and why they are made.

Let's first address the question of their synthesis. Other marine calcifiers, for example bivalves and foraminifera, produce calcite extracellularly. In contrast, coccoliths are produced inside the cell in Golgi-derived vesicles. Therein, the crystallization seems to require an insoluble organic baseplate and the shepherding of calcium using uronic acid-rich coccolith-associated polysaccharides (CAP). Once exocytosed, the coccoliths remain coated with the CAPs and assemble into the exoskeleton, the coccosphere. That is pretty much all that is currently known, there's not much knowledge as to how the different coccolith shapes are made nor how their synthesis might be regulated. Just thinking of what the cell must do to uptake calcium from its relatively low concentration in sea­water and concentrating it to saturation within the vesicle without ever raising the cytoplasmic concentration to avoid toxicity is mindboggling. 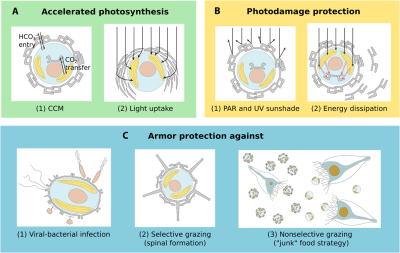 The authors of the review estimate the cell spends a lot of energy and metabolic potential to make coccoliths. Why make them in the first place? As is usual in biology, there are no easy answers to "why" questions. But the authors boldly titled their review "Why marine phytoplankton cal­cify?" Thus, they set the stage to discuss the various hypo­theses that have been put forth and present arguments for and against each of them (Figure 3). There are three main categories of possible functions for coccolith production: (1) accelerated photosynthesis, (2) photodamage protection and (3) armor protection. One way that photosynthesis could be accelerated is if the calcification serves as a carbon concentrating mechanism (CCM) by providing more CO2 near the cell. However, this seems unlikely because under extremely low availability of dissolved inorganic carbon, Ehux continues to photosynthesize and divide at similar rates. A second, more likely possibility, is that the coccoliths scatter photons into the cell. This small increase could prove advantageous for coccolithophores that inhabit the very dim areas of the photic zone. However, none of those have been cultivated in laboratories. So currently there is no easy way to test this idea. The concept of photodamage protection is almost the opposite of photon scattering. The coccoliths could act as a sunshade. While the coccosphere has been shown to reduce possible harmful effects of excess light, Ehux is extremely resistant to photoinhibition even without its coccosphere, arguing against photodamage protection. Finally, if cells produce excess coccoliths this could help dissipate energy and laboratory experiments have shown that abrupt light increases lead to increases in calcification, lending support to this idea.

By far the most compelling hypothesis to explain coccosphere existence is the visually "obvious" one. They serve as armor to protect the cell from predation by shielding against penetrating pa­rasites and preventing ingestion by grazers. I personally like the idea that the coccosphere inhibits bacterial adhesion, partly because Einat Segev (when she was a post-doc in my lab) and colleagues showed that a Roseobacter attached and eventually killed Ehux but only those cells that lacked a coccosphere. But the story is the reverse for an Ehux virus. It can only attach and kill cells with a coccosphere, as presented in another STC post. Regarding grazers, most of the observations and experiments that involve analyses of microzooplankton ingestion of coccolithophores suggest that those that dare to eat the armored creatures suffer some sort of indigestion. But even in this arena, there are conflicting results. In short, when you dare to ask, "Why calcify?" the answers are not all that clear. This current uncertainty, along with their environmental importance and the beauty inherent in their forms, assures that we'll likely be seeing a lot more publications on these fascinating creatures. I very much look forward to them all.