Part of the problem lies precisely in the very effective way in which antibiotics work. Most inhibit essential components of the cellular machinery, efficiently killing susceptible pathogens but also members of our commensal microbiota. This exerts a massive selection pressure, where the only route to survival is the evolution of resistance. As such, we are effectively locked in an evolutionary arms race with pathogenic microorganisms whereby we discover new antibiotics, they evolve re­sistance to them, and the cycle repeats over and over. This echoes the Red Queen hypothesis, in­spired by Lewis Carroll's Through The Looking-Glass: "It takes all the running you can do, to keep in the same place." While there are many promising avenues for antibiotic discovery, a Red Queen dynamic is hardly ideal. 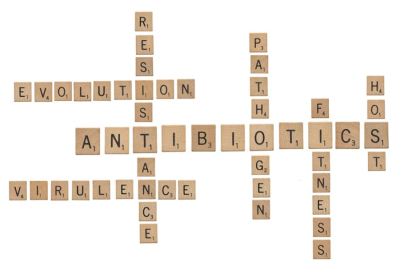 The need for solutions is greater than ever, and ideally, these should aim to break us out of the evolutionary arms race. Clearly, there is a need to develop approaches that reduce the risk of resistance evolving in the first place. Such 'evolution-proof' compounds, to which pathogens are un­able or unlikely to evolve resistance, would be more sus­tainable future alternatives in the face of our current an­ti­biotic resistance crisis.

One 'evolution-proof' option is to target and limit virulence, the damage that pathogens cause during an infection, via an 'antivirulence' approach. Virulence is idiosyncratic to each infection, but always involves complex interactions between pathogen and host. The patho­gen's contribution is often through the production of virulence factors, which help them to suc­cess­fully colonize and infect their host, and are the targets of the antivirulence approach.

The key idea behind antivirulence is that by disarming pathogens rather than directly killing them, the selection pressure for resistance is reduced or even eliminated. By limiting virulence and thus reducing the negative effects of infection on the host, without necessarily affecting pathogen ab­undance, the host immune system is given more time to clear the infection. Another benefit of antivirulence approaches is that they are unlikely to harm the host's commensal microbiota, in contrast to traditional antibiotics whose spectrum of activity is often very broad.

Virulence factors are essential to the lifestyle of many pathogens. For example, Pseudomonas ae­ruginosa, an opportunistic pathogen that commonly infects the lungs of patients with cystic fi­bro­sis, produces the virulence factor pyoverdine. Pyoverdine is an iron-binding molecule (a sidero­phore) which helps P. aeruginosa obtain that essential nutrient, and is also involved in biofilm for­mation and controlling the expression of other virulence factors.

This is where antivirulence comes in. Pyoverdine production can be inhibited by flucytosine, a drug usually used to treat fungal infections; such treatment significantly decreased P. aeruginosa's vi­rulence in a mouse model of infection. In the experiment, 80% of the animals treated with flucyto­sine survived, compared to just 20% without any intervention. The survival rates following flucy­tosine treatment were statistically indistinguishable from survival of an infection with genetically engineered P. aeruginosa that cannot produce pyoverdine at all, providing more evidence that flucytosine is an effective antivirulence compound for this infection. 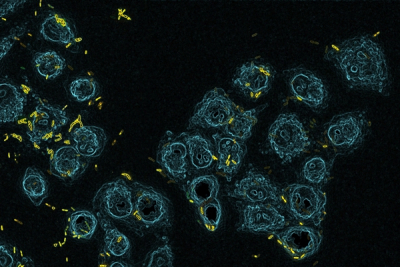 Salmonella enterica serovar Typhimurium is another patho­gen whose virulence factors are essential for its ability to cause food poisoning. Its suite of virulence factors help Sal­monella establish a foothold in the human gut, and includes secretion systems for direct injection of proteins into host cells and iron-binding molecules to swindle the gut micro­bio­ta out this essential nutrient. Interestingly, by inhibiting the protein folding machinery that is essential for the func­tioning of its virulence factors, both the growth and fitness of S. Typhimurium can be significantly reduced in vitro. How­ever, unlike the flucytosine experiments with P. aeru­ginosa, the effects of this protein folding inhibitor have not been tested in animal models of infection.

A slightly different antivirulence approach is to mop up the toxins that pathogens produce. For example, bacterial pathogens in the genus Streptococcus, often associated with severe pneumo­nia and sepsis, secrete toxins that kill host cells by punching holes in their membranes. These toxins can be sequestered in engineered liposomes, tiny vesicles that trap the toxins and stop them from harming host cells. Mouse experiments have shown that although pathogen abun­dance in the lungs during Streptococcus pneumoniae infection is unaffected, using liposomes sig­nificantly enhances host survival, seemingly because the host's immune system is better able to clear the infection in the absence of toxins.

None of this is to say that traditional antibiotics will become obsolete. In fact, they can be used in combination with antivirulence compounds, often with positive synergistic effects. For instance, the susceptibility of antibiotic-resistant P. aeruginosa increases when traditional antibiotics are combined with antivirulence compounds. This approach can even reverse resistance to some com­mon antibiotics in vitro, highlighting its potential for reinstating drugs with high resistance rates. Engineered liposomes can also be combined with antibiotics, and such treatments achieve better host survival compared to an antibiotics-only approach.

Yet microbes are extremely resilient. It may not surprise you that resistance to antivirulence com­pounds, whereby pathogens recover production or function of their precious virulence factors, oc­curs. For example, P. aeruginosa evolves resistance to flucytosine through mutations in the non-essential enzyme Upp, which is required to activate the compound inside the cell. Since Upp is non-essential, mutating it is no big deal for P. aeruginosa, making it an easily evolvable resistance mechanism. Meanwhile, although resistance to the protein folding inhibitors used to fight S. Typh­imurium does not appear to evolve in vitro, the complex environment inside hosts could very well yield a different outcome. 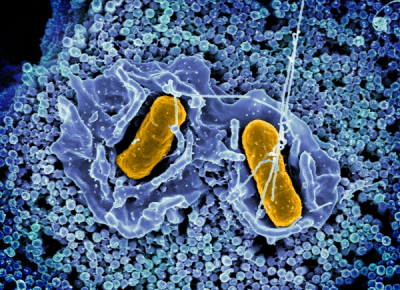 Though some antivirulence approaches appear promising, whether any treatment can be completely 'evolution-proof' is debatable. While some compounds may be more evolu­tionarily robust than others, antivirulence approaches over­all may always carry some risk of resistance evolution re­gardless of the specific mechanisms involved. This is simply because they too exert a selection pressure on the popula­tion, forcing pathogens to evolve if they are to survive and thrive. Because virulence is so central to the pathogenic lifestyle, it may be that the difference in selective pressure compared to antibiotics that kill directly is ultimately quite small.

However, there is nuance to this debate; some have called for a distinction between the ability of pathogens to evolve resistance to antivirulence compounds, which may be inevitable, and whether this resistance will spread rapidly due to strong selection. The potential of antivirulence resistance to spread on a large scale, akin to that of traditional antibiotic resistance, is still unclear. This is cri­tical to determine if we want to know whether we will soon find ourselves in another unwinnable arms race. In the meantime, promoting antibiotic resistance awareness and responsible steward­ship is also extremely important; this can be accomplished by initiatives like the World Health Or­ganization's annual Antimicrobial Awareness Week, which runs from 18 to 24 November this year.

Developing antivirulence drugs is not a straightforward process, and it is not yet clear how promis­ing results from laboratory studies will translate into treatments of real infections. This is obvious­ly complicated by cost and difficulties in carrying out clinical trials and getting drugs to the market, as well as ethical limitations of studying resistant infections in humans. Narrow-spectrum antivi­ru­lence compounds also require a more precise research approach in contrast to traditional broad-spectrum antibiotics, as the goal is to develop treatments that are often infection-specific. All in all, developing drugs based on the antivirulence concept is a Herculean task, considering the sheer number of clinically relevant pathogens and virulence factors.

This task, however, is not impossible. There are currently five antivirulence drugs approved by the US Food and Drug Administration (FDA), all targeting toxins made by pathogens causing botulism, anthrax, and serious gastrointestinal infections. However, only 17 new antibiotics have been ap­proved by the FDA in the last decade. This developing dearth of new treatments, antivirulence-based or not, emphasizes our pressing need for new and improved drugs to combat increasingly resistant infections.

Antivirulence research is an exciting field constantly yielding new discoveries and insights into pa­thogen ecology and evolution. Overall, understanding how different pathogens recover virulence factor activity, and the rates at which this happens and spreads, looks to be essential for the road ahead. However, the potential of antivirulence approaches as an 'evolution-proof' silver bullet for the antibiotic resistance crisis is yet to be determined. It might be wiser to think of them as 'evo­lution-aware' instead; ultimately, evolution is an extremely powerful force that is difficult to over­come, even with "all the running [we] can do." In the immortal words of Dr. Ian Malcolm, Jeff Gold­blum's character in Jurassic Park: "life, uh, finds a way." 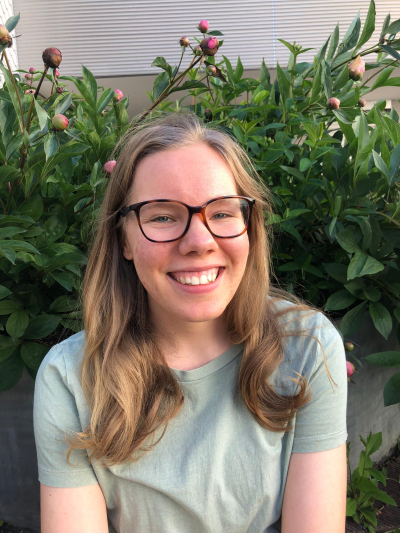 Vilhelmiina Haavisto is a Microbiology and Immunology MSc stu­dent at ETH Zürich in Switzerland, where she works with marine microbes and microbial communities.