Yesterday, when I walked into the corner pharmacy to receive my COVID-19 vaccine "booster" I once again marveled at this truly remarkable scientific achievement. Less than a year after the sequence of the novel SARS-CoV-2 virus was made public, the public at large began receiving mRNA vaccines. Though there may be valid criticisms when it comes to how these vaccines have been distributed worldwide, the technological breakthrough they represent and the promise they hold for the development of future vaccines is undeniable. Who would have thought, just a few years ago, that mRNA vaccines would so quickly come to play a key role in quelling this dreadful pandemic? Not too many. But there were certainly heroes who persisted in their efforts and whose cumulative work over decades allowed for the rapid development of the COVID-19 mRNA vaccines. That's the other half of the story of this amazing scientific achievement and it is the focus of a fine reading piece by Lucy Shapiro and Richard Losick. 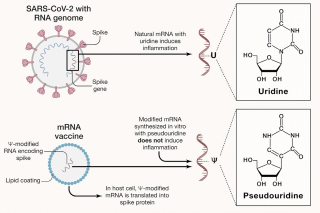 Fig 1. The design of a pseudouridine-modified mRNA vaccine for COVID-19. Source. Frontispiece: Structures of Uridine and Pseudouridine. Source

This is not the first time that Shapiro and Losick put together a compelling "story behind the story" piece, not by any stretch of the imagination! They have jointly authored many pieces, going back almost thirty years. Some of their prior essays I consider classics. For example, the one describing how their view of the bacterial cell evolved from "an amorphous vessel housing a homogeneous solution of proteins" to a complex system where "proteins can, and often do, have particular subcellular addresses." Now, in celebrating this year's recipients of the Lasker–Delaney Clinical Research Award – Katalin Karikó and Drew Weissman – Shapiro and Losick take us through a detailed telling of how efforts that started in the 1980s eventually paid off with the development of the widely used mRNA vaccines. At times facing great odds, disbelief and lack of funds, Karikó persisted in her goal of developing mRNA as a therapeutic. In 2005 Karikó, by then working with Drew Weissman, reported a fundamental discovery. It had long been recognized that synthetic mRNA was highly immunogenic when injected into cells. Their key contribution was the finding that using modified bases to make the synthetic mRNA, for example pseudouridine, suppressed the mRNA-mediated immune stimulation. While this was probably the most important discovery that facilitated the eventual development of mRNA therapeutics, there were plenty other hurdles that had to be overcome. I'll let you click on this link to get the full story. It is a delight to read from A to Z.