A Game of Dice 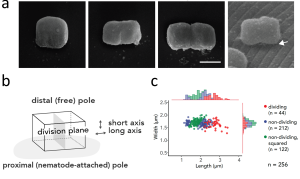 When on the 3rd day of creation − or the 5th, the Old Testa­ment isn't quite clear here − the Bacteria and Archaea were summoned to choose their shapes, there was at once a run on rods and cocci; spirillae were also immedia­tely sold out. The Alphaproteobacteria frolicked and adorned themselves with all available prosthecae, cell appendages, that they cherish to this day. A few Archaea had snatched the quad­rangu­lar chips − one is still around today, Haloquad­ratum walsbyi − af­ter the ever faster phages had quickly distrib­ut­ed the fan­cy icosahedra among themselves. Thus, for one loitering sul­fur-oxidizing Gammaproteobacterium from the Chromatia­les, only the cube remained. Well, mumbled "Can­didatus Thiosymbion cuboideus", then I'll just chal­lenge the mil­limeters-long Stilbonematinae worm Cata­ne­ma sp. "Gua­de­loupe" from the day 5 lot of creatures to a game of dice...  Spoiler: the two have become close friends and still roll the dice today (Figure 1a).

Silvia Bulgheresi's lab at the Archaea Biology and Ecogen­omics Unit of Vienna University, Austria, is in­terested in the remarkable efforts − one could easily talk about "contortions" − that certain bac­te­ria make to suc­cessfully colonize the cu­ticle of nematodes as ectosymbionts (also called epibionts) a special yet not rare form of symbiosis. Two years ago, Philipp Weber described in de­tail "Candidatus Thiosym­bion oneisti" and its lengthwise cell division in this blog (Nanne Nanninga had first introduced it in these pages). Now, Philipp Weber and colleagues have published their recent studies of "Candida­tus Thiosym­bion cuboideus", a relative of "Oneisti" (and the authors won't mind when I call the bacterium not by its full name hereafter but simply refer to it as "Cuby").

Viewed from above by scanning electron microscopy (SEM), Cuby cells lie somewhat disorganized and jumbled but tight­ly packed on the cu­ticle of their nematode host; a few ap­pear to be in the process of dividing (see frontpage). Care­fully prepared single cells revealed their real shape: ti­ny cubes with average edge lengths for non-dividing cells of 1.5×1.7×1.3 µm (Figure 1c). In relative terms, the calculated cell volume of ~3.3 µm3 is roughly 3-times that of a "stan­dard" E. coli cell (1.3 µm3). Like Oneisti cells, Cuby cells ar­range as a monolayer in which every cell is at­tached to the host cuticle. The rod‑shaped Oneisti cells stand upright and cramped like in a palisade, with one cell pole at­tached to the host (see here.) With the Cubies, it looks more like a cobblestone pavement (think of the in­famous Paris-Roubaix bike race course). And rather than having the customary he­mispherical, rounded "pole" they have a flat "polar plane" (Figure 1b).

Weber et al. (2021) confirmed the attachment of Cuby cells to the host cuticle at their "polar plane" by staining live sam­ples with a fimbriae-specific antibody (Figure 2, 2nd row). You should know that working with the bacteria-coated worms in the lab is tricky: they survive sampling, and also transport when frozen, but cannot (yet) be taken into per­manent culture. The same applies to the worms' epibionts: they're alive, that is grow and divide, as long as their hosts stay alive. Nevertheless, the authors showed that Cubies grow "sideways," that is, perpendicular to the "polar plane," because they found incorporation of the Alexa488 fluoro­phore-labeled peptidoglycan precursor ethynyl-D-alanyl-D‑alanine (EDA‑DA) into the extending cell wall at the "division plane," and starting from the (nematode-attached) polar plane (Figure 2, 3rd row). Despite their different cell shapes, Oneisti and Cuby have this "sideways" growth in common. Weber et al. (2021) assume that this is an adaptation to the strict requirement to keep the progeny firmly attached to the host at all times. 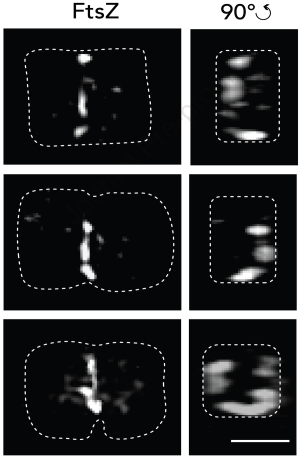 Figure 3. 3D Structured illumination mi­croscopy (SIM) images of cells immu­no­stained with an anti FtsZ antibody. No membrane indentations appear in the two top cells, whereas the two bottom cells are invaginated. The left column shows the front view and the right column a 90˚ shifted side view. Scale bar 1 μm. Source

Cuby didn't stop to surprise the researchers when it came to cell division. It has, like Oneisti, the full set of genes en­coding the regular division proteins including the tubulin homolog FtsZ (see our recent Pictures Considered #52.) In the test tube, FtsZ polymerizes into long, straight rods but inside cylindrical cells like growing E. coli cells one can ob­serve them briefly as shorter side-by-side filaments spiral­ing along the inner membrane. Since they are occluded from the cells poles and also from the nucleoid − or better: from the two nucleoids in growing cells − they accumulate at midcell where cell division will take place. While the divi­some proteins direct the synthesis of the septal peptido­gly­can they simultaneously tether FtsZ arcs to the membrane, and the overlapping arcs give the appearance of a succes­sively constricting "FtsZ" ring (this is a rather sketchy outline of a highly complex process, mind you). In Cuby, Weber et al. (2021) found FtsZ located as short filaments at the side­ways-oriented division plane, and there preferentially at the proximal (nematode-attached) side aligning with commenc­ing invaginations (Figure 2). A closer inspection by 3D struc­tured illumination microscopy (3D-SIM) revealed that the short FtsZ filaments arrange without much overlap along the square-shaped  division plane, in­cluding filaments with apparent kinks, unheard of so far for FtsZ (Figure 3). They did not observe septal closure. Thus, it remains an open question how the very last stage of cell division is orchestrated, which proteins are involved, and how they are spatially organized. It would be intriguing to learn if the "FtsZ square" ever changes shape into a "constricting ring" at any point or whether a bidirectional zipper-like me­cha­nism starting form the proximal (nematode-attached) side does the job, which would nicely maintain the cubic cell shape.

But maybe the difference between a annular 'division zone' as in cells with a cylindrical or spheri­cal shape, rods and cocci, and a more-or-less quadrangular 'division plane' as in Cuby isn't such a big deal after all? The researchers should look over the shoulders of colleagues who are struggling with such problems in Archaea (they certainly do, as they're affiliated with the Archaea Biology and Ecogenomics Unit of their university.) Also other "archaeologists" investigate cell division: Kanika Khanna had recently reported here in STC about it and the particular role of the archaeal FtsZ ho­molog, FtsZ1,: The Cake-Cutting Problem in the Archaeal World.