« Winter Vacation | Main | Of Terms in Biology: The Polony Method »

The world lost one of its premier de­fenders of bio­di­ver­si­ty and a pio­neer­ing eco­lo­gist and evo­lu­tio­na­ry bio­lo­gist when E. O. Wil­son died on De­cem­ber 26, 2021, at the age of 92. We start the year ho­nor­ing the me­mory of this remarkable scientist and communicator. His many scientific contri­bu­tions, at times awe-inspiring and at times controversial, left an impact that will be felt for many decades to come. In my opinion, it was his gift for delivering a clear narrative of science in an ea­sily accessible form that will be his most lasting legacy. The passion he felt for his subject matter was always evident in his writings, from his vivid descriptions of a colony of ants to his call for sav­ing the Earth's biodiversity. For micro­biologists, the closing paragraph from his 1994 autobio­graphy Naturalist, will forever remain inspirational: 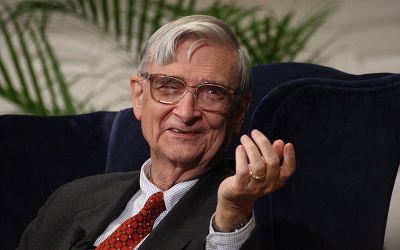 "If I could do it all over again, and relive my vision in the twenty-first century, I would be a microbial eco­logist. Ten billion bacteria live in a gram of ordinary soil, a mere pinch held between thumb and fore­finger. They represent thousands of species, almost none of which are known to science. Into that world I would go with the aid of modern micro­scopy and mo­lecular analysis. I would cut my way through clonal forests sprawled across grains of sand, travel in an imagined submarine through drops of water propor­tionately the size of lakes, and track predators and prey in order to discover new life ways and alien food webs."