Life After CPR (once again...)

As true aficionadas y aficionados around the world do, Steve Petrovski's lab at La Trobe University in Melbourne, Australia went on the hunt for bacteriophages in the wild. Which they didn't find, but their booty was a predatory bacterium, and, according to the detective story told in their re­cent publication, this is how it all came about: wastewater treatment plants often suffer from a persistent stable foam on the aeration basin. Long known, this foam is stabilized by Mycolata, a highly hydrophobic group of Actinobacteria, and − for a lack of environmentally friend­ly and re­liable methods for treating such foams − biocontrol by actinophages had been suggested as an attractive mitigation strategy. In fact, "phage therapy" was already shown to be effective on the laboratory scale. Except that there are presently no phages known to infect Gordonia amarae, a member of the Mycolata and one of the most commonly reported "foamers". 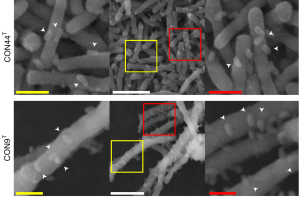 As mentioned, Batinovic et al. (2021) could not find phages that infect Gordonia amarae CON44T nor the closely related Gordonia pseudoamarae CON9T. Sequencing of both gen­omes revealed that they are likely not susceptible to phage infection as they possess, in comparison to other Actino­bacteria from their wider familiy, an extended gene set for antiviral mechanisms including restriction, bacteriophage exclusion (BREX), and CRISPR‑Cas. What popped up instead in their 'plaque assays' turned out to be a quite differrent  type of "bacterio‑phage" (literally 'bacteria eater'), a tiny bacterium of ovoid shape, 450 nm in length and with a dia­meter of 245 nm (see Figure 1).

Full-length 16S rRNA sequencing made it evident that this bacterium belongs to the phylum Saccharibacteria like Nanosynbacter lyti­cus TM7x that was recently featured in these pages by Mechas and Roberto (inspiring the title of this post.) Much like other known Saccharibacteria, it has a small circular genome (1,081,308 base pairs) with a GC‑con­tent of 50.4%. The reduced genome encodes 1,125 predicted protein-coding genes, 43 tRNA genes and a single copy of rRNA genes (for comparison, E. coli K-12 MG1655: 4.6 Mbp length, 50.8% GC-content, 4,285 orfs, 86 tRNA genes and 7 rRNA operons.) The novel bacterium grows readily in co‑culture with either Gordonia host ─ or prey? ─ but cannot be cultivated axenically, that is, alone (I'm not aware of experimental results of growth tests on host homogenates but maybe cell‑cell contact is required.)

An aside. According to the rules set by the LPSN for uncultivated species, the novel Lilliputian was baptized "Candidatus Mycosynbacter amalyticus JR1" but I will talk of M. amalyticus JR1 in the fol­lowing, or simply of "JR1," as they certainly do in the lab. Likely, the strain ID "JR" points to co–au­thor Jayson J A Rose. Yet, I recall that the villain in the 1980's TV series 'Dallas' was a certain J.R. Ewing, always just "JR". Which would also nicely fit with this predatory bacterium. 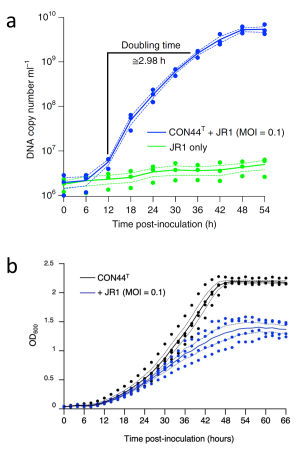 The M. amalyticus JR1 genome lacks genes for de novo syn­thesis of amino acids or fatty acids. It contains a re­pertoire of genes for enzymes involved in glycolysis, in the pentose phosphate pathway and in the breakdown of some simple carbohydrates, which may provide the bacterium with ATP and reducing power (NADPH) to support its growth. The genome also encodes a whole range of peptidases, lipases, glycanases, and DNases/RNases that may form part of its predatory arsenal together with a type IV secretion systems (T4SS). Batinovic et al. found type IV pili in electron micro­graphs of JR1 cells and assume that they are capable of twitching motility which might be key for attaching to host cells. Attachment of JR1 to host cells occurs rapidly, within minutes of inoculation of a co-culture, and results in many or most cases in delayed host lysis. However, they did not observe invasion of the host cells by JR1 ─ in contrast to the life style of the predatory Bdellovibrios that grow and re­pli­cate in the periplasm of their Gram-negative hosts.

The advantage of the small size of JR1 cells is that they can be easily separated from host cells by filtration, and then used as inoculum for growth assays of co‑cultures. Figure 2 shows growth curves of co-cultures (and as a control, single host cultures) and it is obvious that JR1 does not grow with­out the presence of host cells. But when inoculated at a mul­tiplicity of infection (MOI) of 0.1 it shows a very reason­able generation time of ~3 hours in co-culture with G. ama­rae CON44T (a). Conversely, the normal (logarithmic) growth of Gordonia is significantly reduced in the presence of JR1 but not completely suppressed even over 60 hours of in­cubation (b). Upon prolongued co‑cultivation in the lab, JR1 and Gordonia amarae CON44T can form a sustained pre­dator-prey relationship with alternating population decli­ne/increase but it is presently not known whether this occurs also in a natural setting. 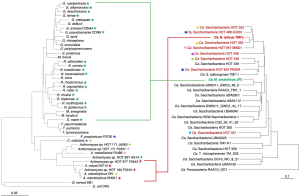 After Batinovic et al. (2021) had found that JR1 preys on two Gordonias, they obviously wanted to find out how broad its "host range" is. Quite broad, as it turned out, but not indis­criminate. They found JR1 "plaques" on 27 Actinobacteria of the genera Dietzia, Millisia, Nocardia and Rhodococcus but no lysis of species from the genera Mycobacterium, Sker­ma­nia, Streptomyces and Tsukamurella. Lab strains of E. co­li  (Gammaproteobacteria) or Bacillus cereus (Firmicutes) were despised by JR1.

I find it fairly thrilling that the "host ranges" of the Sacchari­bacteria M. amalyticus JR1 and Nanosynbacter lyticus TM7x that both feed on Actinobacteria do not overlap (Figure 3). Less studied are a number of Saccharibacteria listed in Fi­gure 3 that also show marked preferences for particular ac­tinobacterial "hosts". In summary, it almost seems as if the phenomenal diversity of Actinobacteria is fully mirrored in the diversity of their Lilliputian predators. And, mind you, the Saccharibacteria are just one branch in the vast 'Candi­date Phyla Radiation' (CPR) that will also be known as 'Phy­lum Patescibacteria' in the future when more researchers adopt the GTDB taxonomy (in GTDB parlance: d__Bacteria; p__Patescibacteria; "d" for domain, "p" for phylum, and the double-underline to avoid confusion with the still prevailing NCBI taxonomy).

Batinovic et al. conclude that the application of their para­sitic bacterium, "Candidatus Mycosyn­bacter amalyticus JR1", may be a promising strategy for the biocontrol of waste­water foams caused by Gordonia and oth­er Mycolata. Voilá, the CPR bacteria go grey biotech...