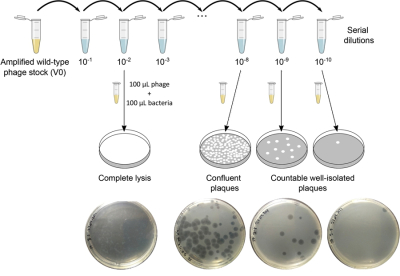 If there is one venerable laboratory technique in virology, it is the plaque assay for the de­tection and quantification of bacteriophages. It was pioneered by Felix d'Herelle already around 1917, and in the early 1950s, plaque assays were also established for eukaryotic viruses by Renato Dulbecco and Marguerite Vogt. Plaque assays for eukaryotic viruses are a tad more difficult than those for phages, sometimes really tricky.

In principle, a plaque assay is remarkably simple: prepare a dilution series of a phage lysate, mix dilutions well with ali­quots of a growing culture of their host bacteria plus hand-warm molten low-percentage agar, and pour the whole thing onto a culture media plate. After overnight incubation, you can then count the plaques in the bacterial lawn (as on the frontpage image) to determine the titer of the phage ly­sate, usually given as pfu·ml−1 (plaque forming units per ml) (Figure 1). In practice, however, plaque assays for phages require the careful calibration and control of quite a num­ber of parameters, as discussed in detail by Anderson et al. (2011). Easy to see though, plaque as­says for counting phages do not work if you have − or suspect you have − lots of phages in a sample but the host bacteria are difficult or impossible to culture on plates, or − even worse − not known.

Enter the 'polony method,' a term that snappily fuses "PCR" and "colony" (when pronounced, the emphasis is on the first syllable). It was developed around the turn of the millennium as "a me­thod to clone and amplify DNA by performing the polymerase chain reaction (PCR) in a thin poly­acrylamide film poured on a glass microscope slide. The polyacrylamide matrix retards the diffu­sion of the linear DNA molecules so that the amplification products remain localized near their re­spective templates. At the end of the reaction, a number of PCR colonies, or 'polonies', have form­ed, each one grown from a single template molecule." A clever trick of the method is that one of the two PCR primers is co-polymerized right into the polyacryl­amide gel − and thus evenly distri­buted and locally fixed − by an acrydite group at its 5'‑end. 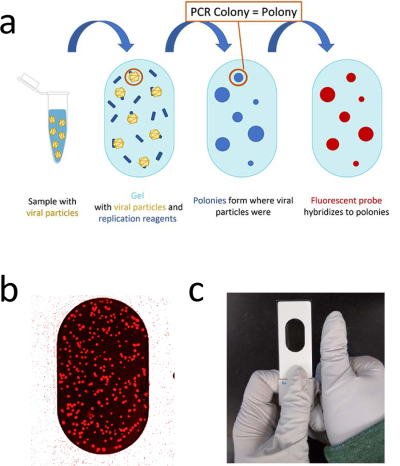 Figure 2. a Simplified diagram of the po­lo­ny method. b Example polonies obser­ved in the lab. c A smaller than usual slide was used to study the polonies (thumb for scale). Source

More recently, Debbie Lindell's lab at Technion, Israel In­stitute of Technology, combined the polony method with the long-established FISH technique to identify bacterio­phage DNA amplified in the gel, the "polonies," directly by hybridization with specific fluorescently labeled probes. In addition, polony slides can be processed in parallel, and easily "stripped" for (at least one) re-hybridization with a different probe. For the not so tech-savvy, "reading" of the slides after hybridization is done semi-automatically by a microarray scanner or by a epifluorescence binocular, and counting of the signals can be done using special software (Figure 2). It is therefore a true high throughput technique unlike the traditional plaque assay (what we had often wished for in the past when contemplating the huge stacks of plates on the lab bench.)

Obviously, no growth of host bacteria is required to enu­mer­ate phages in a sample. However, in order to design PCR primers that cover the phages present at a chosen sample site one needs metagenomic se­quences from exactly that site. Thus, to test and validate the polony method, Baran et al. (2018) first sequenced sea water samples from the Gulf of Aqaba, Red Sea during the spring bloom in 2013, and focused on the T7‑like cyanophages (double-stranded DNA phages, genome sizes ~40 kbp) that infect marine picocyanobacteria (Syn­echo­coccus and Prochlorococcus). They then designed degenerate primers that encompassed the group's (considerable) diversity and used them for polony assays of samples taken at 9 points at depths of 0−400 m. 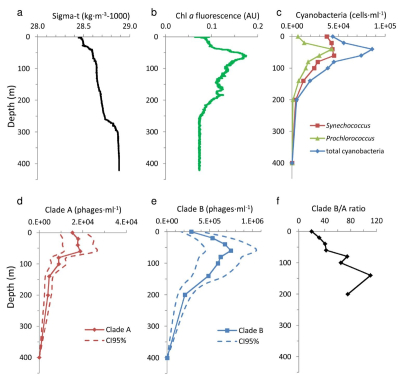 Figure 3. Depth profiles of T7-like cyano­phages and cyanobacteria collected from the Gulf of Aqaba, Red Sea during the spring bloom on 4 April 2013. a Density of the water column determined from in situ mea­surements of salinity and tempe­rature, b chlorophyll a fluorescence de­termined from in situ measurements, c cyanobac­terial abundances determined from flow cyto­metry, d abundances of clade A T7-like cyano­phages deter­mined by the polony method after 50-fold con­centration, e abundances of clade B T7‑like cya­no­phages de­termined by the polony method, and f the ratio of clade B to clade A T7-like cyanophages. Results are from a single sample collected at each depth with 3 technical replicates for cyanobacterial counts and 2 technical re­plicates for phage abundances. Source

With a carefully measured conversion rate of approximately 1 (obtained polonies/counted input phages) they found a maximum of 7.7×105 phages·ml−1, and phage numbers dis­played a similar depth distribution pattern as their cyano­bacterial hosts. Abundances of two major clades within the T7-like cyanophages differed significantly throughout the water column: clade B phages that carry the psbA photo­syn­thesis gene and infect either Synechococcus or Prochlo­rococcus were at least 20-fold more abundant than clade A phages that lack psbA and infect Synechococcus hosts (Fi­gure 3). Taken together, they found the polony method superior to the controls, quantitative PCR and flow-cyto­metry, in detection and enumeration of mixed phage po­pulations in sea water samples (for plausible technical and fundamental reasons, which would be too long to go into here in any depth).

Have you ever heard of gokushoviruses? Neither have I,... but I vaguely recall Merry once mentioning them en passant as rather weird examples of "virtual phages," that is, those known only from metagenomes. With their scientifically correct name, the Gokushovirinae are single‑strand­ed DNA phages of one of the two sub‑families of the Microviridae. To give you some orientation: ΦX174 of sequencing fame (1977!) is the best known member of the other subfamily, the Bullavirinae, formerly family Microviridae (yes, there has been some name and rank reshuffling in the virosphere recently). With a length of ~4500 nucleo­tides (nt), the genomes of the gokushos are among the smallest of DNA viruses, and they code for just a handful of proteins including the major capsid protein VP1, the replication protein VP4, and the DNA pilot protein VP2 that guides the phage DNA into the host cytoplasm. They are assumed to be lytic phages but indications of resident prophages were found in Bacteroidetes genomes, and also found widely distributed in Entero­bacteriaceae genomes. Only three gokushos are better known, Bdellomicrovirus, Chlamydia­microvirus and Spiromicrovirus (Figure 4), and their names already point to their natural hosts Bdellovibrios, Chlamydiae, and Spiroplasmas, which are obli­gate parasitic bacteria from diverse phyla (Deltaproteobacteria, Chlamydiae, Mollicutes). But they are by no means exotic or rare, as gokushovirus‑re­lated sequences have consistently be found in non-negligible numbers in metagenomes − you find >1000 metagenome-assembled genomes (MAGs) in the databases − from a wide range of habitats throughout our planet, from human mi­crobiome to seawater, freshwater, soil and sedimentary structures like microbialites, and only missing in hypersaline and hyperthermophilic types of samples. 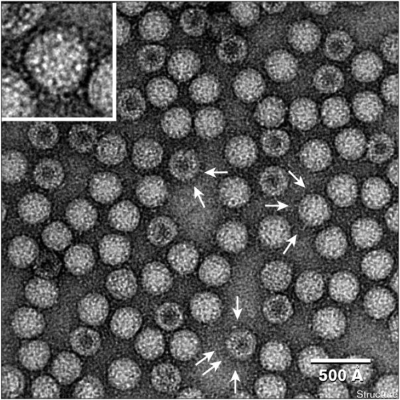 Figure 4. Spiromicrovirus SpV4 particles negatively stained with 1% uranyl acetate on a carbon support film. Arrows high­light protrusions on three particles. The inset, a close-up view of one particle, shows se­veral, stain-ex­cluding (white) 'dots' inside the particle. The dots are li­ke­ly to be end-on views of the protru­sions. The scale bar = 500 Å. Source

This prompted Natalie Sawaya and collaborators from Mya Breitbart's lab at the University of South Florida (USF), USA, to collaborate with the Lindell lab and adopt the polony me­thod for quantifying the gokushoviruses in seawater sam­ples without prior knowledge of their natural hosts as a first step to better understand their ecological role(s). They de­signed primers and hybridization probes for this study based on PCR amplicon diversity of gokushovirus major cap­sid protein VP1 gene sequences from a depth profile (8 samples at depths of 0−700 m) in the Gulf of Aqaba, Red Sea sampled in September 2015. At the ≥95% identity cut-off (ANI), these 87 gokushovirus sequences formed 14 dis­crete clusters with the largest clades showing distinct depth distributions. In the polony assays, the sought-after goku­shos were most abundant in the upper layer of the strati­fied water column, with a subsurface peak in abundance of 1.26×105 pfu·ml−1 at 50 m (where "pfu" refers to 'polony forming units' here.) This is the first quantification of go­kushos in a natural habitat, and suggests that, first, they're as abundant as surmised from their in incidences in metagenomic samples, and, second, that dis­crete genotypes infect bacterial hosts that differentially partition in the water column, which may help in their identification.

It is impossible at present, in the second year of the ongoing pandemic, to write about a viral topic without mentioning SARS‑CoV‑2. So, here it goes. In the meantime, virologists have developed plaque assays but primary diagnostics is, according to WHO recommendations, done with 'lateral flow immuno­assays' (Ag‑RDTs) that you know as "rapid antigen tests," or 'nucleic acid amplification tests' (NAATs), colloquially called "PCR tests." And no, the polony method has not yet been adapt­ed to diagnose and quantify SARS‑CoV‑2. Largely because Victor Corman and an international team led by Christian Drosten had developed the "PCR test" in record time: it took a mere 2 weeks from the release of the SARS‑Cov‑2 sequence by Chinese scientists led by Yong-Zhen Zhang to the adoption of this 1st PCR protocol by WHO. The regular, peer-reviewed publication followed quickly, on January 23, 2020.

You could read and hear across all channels of (serious) science communication over the past two years that the PCR technique was key in this super-fast development of rapid diagnostics of SARS‑CoV‑2, including its presently spreading delta and omicron variants. True, but few reports in the media mentioned that another, much earlier invention made PCR diagnostics feasible in the first place: since SARS‑CoV‑2 is a single‑stranded RNA virus, its genetic material must first be trans­cribed into DNA prior to amplification via PCR (the main reason why the polony method can't be applied without major tweaks). The enzyme used for this purpose, reverse transcrip­tase, was first described by Howard Temin and concurrently by David Baltimore in 1970. Reverse transcrip­tase (RT) gives the technique its correct, full name: RT-qPCR (note that for 'quantitative' or 'real-time PCR,' 'qPCR' is now used instead of the former abbreviation 'RT-PCR' that has been ditched due to possible confusion). Both Temin and Baltimore shared the Nobel Prize for their discovery in 1975 with Renato Dulbecco and, as happens with such regularity, Marguerite Vogt was passed over.