Diazomania I ─ A Bird's-Eye View of the Nitrogen Cycle

In a prior post on diazotrophs, I mentioned my plans to write a "Diazomania" series in the same spirit as our Fungomania series. Beginning today and for three consecutive Mondays, we'll have nitrogen-related posts. Researching the subject has been a wonderful eye-opener, I had so much to learn. I hope you'll enjoy the series.

Here's a good way to get friends or re­la­tiv­es in­ter­est­ed in mi­cro­bio­lo­gy – if they aren't al­ready. Tell them to take a deep breath and to let it out. Then ask them these ques­tions: "Mostly, what went into your lungs?", and "What hap­pened to it while in your lungs?" Re­gard­less of what their answers are, they will be great conversation starters. Of course, you'll be looking for "nitrogen gas" as the first answer and "absolutely noth­ing" for the second. The fun starts in explaining how come noth­ing happened to that nitrogen gas. I'm hoping you'll be able to pluck some low-hanging fruit from the posts in this new "Diazomania" series to carry on many conversations about nitrogen. There's so much wonderful and important stuff to be learned on the subject! 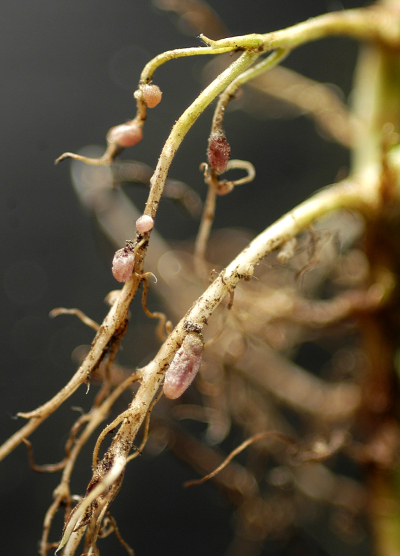 All organisms need nitrogen to make nucleic acids and pro­teins, life's two most important polymers. Despite its re­markable abundance in the atmosphere, nitrogen gas (N2) is virtually inert. How come? That triple bond joining the two nitrogen atoms is extremely stable! (Now, lest you think all triple bonds are inert, not so. Think of the reactivity of ace­tylene. Turns out, the very basic chemistry of why the nitro­gen triple bond is so stable is still under study; here's a re­cent paper on the subject.) But as far as biology is con­cern­ed, the bottom line is that nitrogen gas is extremely unreac­tive. Thus, most of life cannot obtain its nitrogen from N2. And when it comes to primary producers, that is, photo­syn­thetic organisms – importantly the plants we eat – their growth is often limited by the availability of nitrogen in forms they can use, most often nitrate (NO3–) and ammonium (NH4+).

So, among Earth's many life forms, who is able to fix nitro­gen? The diazotrophs, the bacteria and (a few) archaea able to grow with N2 as their sole nitrogen source. How do they do it? Give thanks to nitrogenase, that amazing enzyme able to catalyze the reduction of N2 to NH3 through a very energy-intense mechanism requiring 16 ATPs per molecule of N2. Nitrogenase is highly conserved but widely distributed. This means that there are many different types of diazo­trophs, providing plenty of material for future "Diazomania" posts. To whet your appetite, here I'll very briefly describe just one fascinating feature of the lifestyle of one my favorite diazotrophs, Rhizobium leguminosarum, which colonizes nodules in the roots of legumes (Fig. 1). Notice that the nodules have a reddish tint. How come? That's another conversation starter. Nitrogenase is extremely oxygen-sensitive and diazotrophs have evolved diverse means of keeping oxygen away from their precious enzyme. The red color of the legume root nodules is the result of the plant producing leghemoglobin, which has structural and chemical similarities to our own hemoglobin. Leghemoglobin's key feature is that it binds oxygen. Turns out that leghemoglobin buffers the oxygen concentration of the cytoplasm of the infected plant cells to just the right level such that nitrogenase is not inhibited but the cell can still carry out aerobic respiration. Thus, the cell can provide plenty of ATP for the energy-hungry nitrogenase! 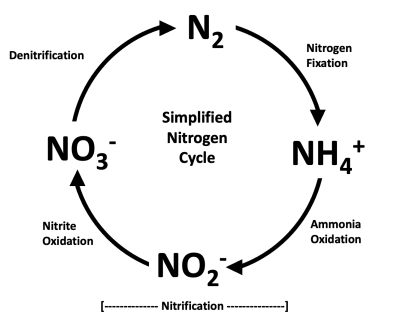 When diazotrophs convert N2 to NH3 they are making ni­trogen available for the growth of the rest of life on Earth. But that is just one part of Earth's nitrogen cycle; it's im­portant to consider nitrogen fixation in the context of the whole cycle of inorganic nitrogen. The diagram (Fig. 2) shows a vastly (over)simplified nitrogen cycle, to present the nomenclature to those of our readers who might not yet be familiar with the terminology. Three main terms: nitrogen fixation (N2 to NH4+); nitrification, here split into two steps: ammonia oxidation and nitrite oxidation (NH4+ to NO2– to NO3–); and denitrification (NO3– to N2). The fact that all these steps are carried out mostly by bacteria and archaea should come as no surprise to STC readers. There are how­ever, eukaryotes – some fungi and some Foraminifera – that denitrify. (Inter­estingly, one genus of Foraminifera, the Globobulimina, got its denitrifying genes from bacteria.) There are also two im­portant terms that refer to entry and exit of nitrogen from this inorganic cycle. The first is the up­take of nitrate by plants, assimilation. The second comes in when plants (or the animals that eat them) die, along come myriad bacteria and fungi and break down organic nitrogen-containing compounds and release NH4+; that's ammonification. There's even more terminology but we'll leave that to the diehard aficionados.

This simplified version of the cycle and its microbial players have been known for more than a century. Yet, two recent discoveries point to the fact that there is still a lot to learn. First there's the discovery, just two decades ago, of a long-suspected bacterium, a Planctomycete, that is able to carry out anaerobic ammonium oxidation (ANAMMOX): NH4+ + NO2– → N2 +2H2O. Mind you, this was not easy microbiology. To date there are some dozen candidate species of ANAMMOX Planc­tomycetes, but none has been obtained in pure culture. Yet ANAMMOX is thought to be a major route of N2 production in the oceans and thus serves as a force that limits primary productivity. Second, since the times of Sergei Winogradsky, the two steps of nitrification were thought to be the domain of separate bacterial species. So, again surprisingly, investigators recently discovered (here and here) bacteria – members of the genus Nitrospira – capable of carrying out both am­monia oxidation and nitrite oxidation. They are called, endearingly, COMAMMOX. I wonder what the next surprise will be! 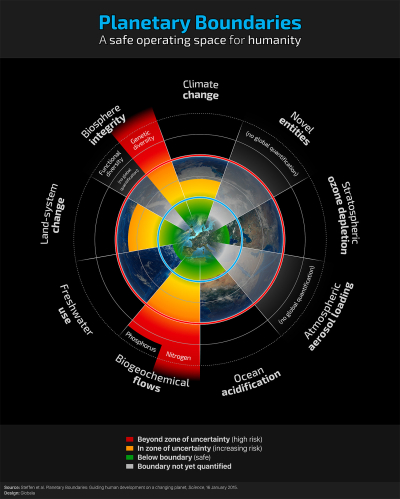 Figure 3. Planetary boundaries as of 20­15 Source

But beyond the surprises, there are ample reasons that we should care deeply about the nitrogen cycle on Earth. Most­ly, because it affects our ability to live on this planet. As far as we can tell, the conditions propitious for present-day hu­man societies have only been around on this "Earth System" for a little over 10,000 years, the Holocene epoch. Unfortu­nately, anthro­po­genic changes are quickly changing those conditions. To quantify these changes and deter­mine when they will reach the "point of no return" a group of scientists came up with the concept of "planetary boundaries." These boundaries are their estimates of the safe levels of nine dif­ferent types of human perturbations, levels that if action is taken a return to Holocene conditions is still possible. Of these nine types of activities, two are now well beyond that safe boundary, that is, anthropogenic changes are so vast that the conditions are likely to never return to those that dominated the Holocene. Those two are: loss of genetic di­versity (species extinction) and the biogeochemical flows of phosphorus and nitrogen. With nitro­gen being way over the top! Why so? For most of Earth's history, the evolution of the ni­trogen cycle took its time. Slow geochemistry was in com­mand for the first two billion years. By 2.7 billion years ago the microbial processes that came to shape the nitrogen cycle had evolved and remained pretty much the same. Un­til the last 100 years. Then, in 1908 Fritz Haber filed the pa­tent for his invention of a method for the synthesis of am­monia from nitrogen and hydrogen gases. The Earth was dramatically transformed in the subsequent century. Rea­dily available synthetic fertilizer meant a radical transfor­mation of agricultural practices. The human population would likely be less than four billion instead of the current nearly eight billion had Haber not made his invention. What was initially seen as a cure for world hunger has turned into a catastrophic shift in the Earth's nitrogen cycle, with potentially catastrophic consequences. The numbers say it all: today 45% of the fixed nitrogen entering the cycle is the result of anthro­pogenic activities (Fig. 4). Is there a way out of this mess? It will take major changes in current agricultural practices to dramatically reduce the use of synthetic fertilizers. In the closing words of a landmark review on the subject: "Humans can do something about managing the nitrogen cycle, and micro­bial processes will ensure that a new balance in the cycle will be reached. However, even with man­agement, the future cycle will likely be different from the one that preceded the Industrial Revolution." That's some serious food for thought. Welcome to diazomania!