This is the second of this year's three installments of the new STC series "Diazomania." Previously on Diazo­mania, I introduced the global nitrogen cycle. Today, I dive into marine nitrogen fixation...

When it comes to ex­pan­sive oli­go­tro­phic en­vi­ron­ments re­plete with mi­cro­bi­al life, the sur­faces of Earth's oceans are hard to beat. There­in, most of the pri­ma­ry pro­duct­ion comes from a rich di­ver­si­ty of pho­to­syn­the­tic mi­crobes. There's plen­ty of light and CO2, so growth is there­fore li­mit­ed by some­thing else. One key li­mit­ing nu­trient is, not sur­pri­sing­ly, ni­tro­gen. Ni­tro­gen gas (N2) is abun­dant, but most organisms can't use it as such. Only diazotrophs – the "nitrogen fixers" – can con­vert N2 into NH3. Once thus fixed, nitrogen can be widely used. Diazotrophs are thus foundational in marine food webs. Who are these oceanic nitrogen heroes? Diazotrophic cyanobacteria. I will admit it. When I set out to do a piece on photosynthetic diazotrophs for this series, I was thinking Anabaena or Nostoc. But as I delved into the subject, I realized I had to discuss someone else. A marine cyanobacterium that has fascinated observers for centuries yet remains rather mysteri­ous. Enter center stage, Trichodesmium. 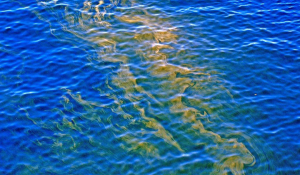 Since time immemorial mariners described reddish-brown swirls in the ocean surface as "sea sawdust." The Red Sea is said to have gotten its name from the color of sea sawdust blooms. Darwin himself wrote, while aboard the Beagle: "We sailed from Bahia. A few days afterwards, when not far distant from the Abrolhos Islets, my attention was called to a reddish-brown appearance in the sea. The whole surface of the water, as it appeared under a weak lens, seemed as if covered by chopped bits of hay, with their ends jagged." These conglomerates of "chopped bits of hay" can bloom to dimensions that make them visible from space. Before Dar­win first boarded the Beagle, Christian Ehrenberg analyzed the contents of these blooms. Seeing bundled filaments, he named the microbe Trichodesmium (from Greek tricho [= hair] + desmos [= tie, bond, chain]). Currently, just a handful of species are described and, among the most abundant species in the oceans, one cultured strain – Tricho­des­mium erythreaum IMS101 – is the subject of most laboratory studies.

Despite its long history, it was not until the last few decades that the role of Trichodesmium on global biogeochemistry came under study. In the 1960s, there was the initial recognition that primary productivity of vast expanses of the oceans is usually limited by nitrogen availability. Just about the same time came the discovery that the very abundant Trichodesmiun is not only a phototroph, but also a diazotroph. Here was a marine bacterium that could indeed be providing fixed nitrogen for the growth of many of the ocean's photosynthetic organisms (including itself) which in turn could assimilate the greenhouse gas CO2. Studies on marine nitrogen fixation be­came a priority and Trichodesmium began to gather some attention. A landmark publication that appeared in 1997 argued for the global importance of Trichodesmium and led to a relative explo­sion of interest in studying this bacterium. The work has paid off nicely. Today we know that Tri­chodesmium is indeed a key player in the oceanic nitrogen cycle, contributing about half the total fixed nitrogen of the upper ocean – an estimated 80 Tg annually (80 Tg = 80,000,000,000 kg.) And we are only beginning to understand how it does it. 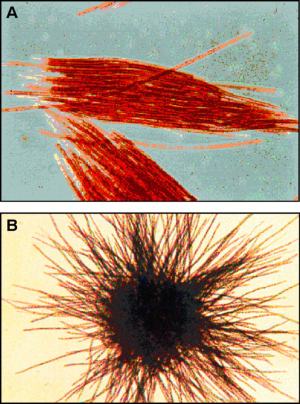 Figure 2. Examples of Tri­cho­desmium co­lo­nies. (A) Fusiform or tuft of Tricho­desmium culture IMS 101; (B) radial or puff colony of T. thiebautii. Colonies are typically ∼2 to 5 mm in length (fusiform) or diameter (radial) and are composed of tens to hundreds of aggregated filaments (trichomes). Each trichome consists of tens to hundreds of cells (typically ∼100); cells are generally 5 to 15 μm in diameter but can range up to 50 μm in length (photos by H. Paerl). Source

Trichodesmium is multicellular. Cells divide but do not usu­ally separate, forming filaments containing from tens to hundreds of cells. Individual filaments, called trichomes, aggregate lengthwise into tufts, or radially into puffs. Both morphologies are referred to as colonies. But bacterial co­lonies sensu strictu – as in all cells present are derived from a single progenitor cell – these are not. In their natural set­tings each one of these Trichodesmium aggregates is a ve­ritable zoo, housing myriad other organisms that are more than ready to take advantage of the fixed nitrogen avail­able. Perhaps the most striking feature of Trichodesmium biology is that it fixes nitrogen during the day, when it is al­so carrying out photosynthesis. How does it manage to keep the oxygen-sensitive nitrogenase active whilst gener­ating oxygen from photosynthesis?

Turns out, there is still no clear-cut answer to this question, which is one reason Trichodesmium remains enigmatic. Oth­er photosynthetic diazotrophs have solved the problem by separating the processes. For example, Anabaena grows in chains and some cells differentiate into heterocysts – ni­trogen-fixing specialists physically separated from the pho­to­synthesizing cells. Using a different approach, the unicel­lular marine cyanobacterium Crocosphaera watsonii sepa­rates the processes temporally. Photosynthesis during the day, nitrogen fixation at night. This allows the organism to be particularly thrifty about iron, which is usually growth-limiting for marine diazotrophs. Enzymes that use iron, for example nitrogenase, are completely degraded during the time of day when not needed so that the iron can be used in enzymes needed at that time. Clearly, there must be costs associated with keeping photosynthesis and nitrogen fixation active at the same time in Trichodesmium. So, what might be the advantage of using this approach? 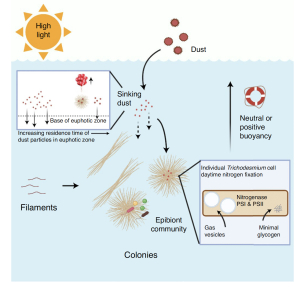 Figure 3. Summary of physiological pro­perties and behaviors that are reinforced by daytime nitrogen fixation by Tricho­desmium. Source

This is the question that Noelle Held and collaborators ad­dress in a recent publication. They did comparative prote­omics of Trichodesmium and Crocosphaera samples taken along time with light and dark periods. Their results corrob­orated the facts that Trichodesmium fixes nitrogen in day­light and Crocosphaera in the dark. But they discovered new details that led them to propose an ecological advan­tage to daytime nitrogen fixing. In short, Crocosphaera must build a glycogen reserve during the day to drive the energetically costly nitrogenase at night. The glycogen makes the cells denser during the day. As they sink they leave the high-light zone, not good for photosynthesis. By shuttling energy directly from photosynthesis to nitrogen­ase, Trichodesmium does not need to accumulate glycogen ballast and, with the aid of its gas vacuoles, can remain afloat at the ocean surface. There it can photosynthesize more efficiently and importantly, collect dust, the major source of iron. Here's how the authors phrase it in the full legend of the figure: "Trichodesmium cells, filaments and colonies have a ten­dency to sink due to their large size and tendency to aggregate. Daytime nitrogen fixation mini­mizes glycogen ballast. Trichodesmium can also regulate buoyancy through production of gas ve­sicles that confer neutral and/or positive buoyancy. Thus, Trichodesmium is more likely to remain in the upper water column, where they benefit from their high-light-adapted pigments, their ability to access iron from dust particles and interactions with the epibiont community. Additionally, buo­y­ant Trichodesmium colonies may increase the residence time of dust particles in the euphotic zone, providing more time for particle solubilization." Clever bug!

To end, I'll come back to the question of how Trichodesmium keeps oxygen away from nitrogen­ase. One proposal is that there are specialized cells, diazocytes, where nitrogen fixation takes place. However, the evidence for diazocytes is controversial. In their paper, Held et al. do a good job at summarizing the current state of knowledge regarding diazocytes and my take is that they do not favor that hypothesis. Their proposal depends on efficient energy shuttling from photosyn­thesis to nitrogen fixation, something that would not happen if there were specialized cells separating the processes. There is still much to learn. One thing is clear, in Trichodesmium photosynthesis and nitro­gen fixation co-occur during the day and the genes involved are co-regulated. I wonder if the ni­trogenase is protected by a fine-tuning of both processes. Active nitrogenase increases buoyancy. As cells approach the surface, light intensity increases, which increases oxygen production. More oxygen, less nitrogenase, less buoyancy. Cells begin to sink. Until a "goldilocks" light intensity is reached that makes just the right amount of energy for nitrogenase, without producing too much damaging oxygen. Just a thought, perhaps worth exploring.