When it's too cold to grow

I began thinking about the cold weather in Bos­ton while I swam in an open wa­ter com­pe­ti­tion off the coast of Car­ta­ge­na de In­dias in Co­lom­bia's Carib­bean coast last week­end. Then my thoughts drift­ed to bac­te­ria swim­ming in col­der and col­der wa­ters. And then the ques­tion: What caus­es the ces­sation of bacterial growth at low temperatures? It's a topic that first fascinated me decades ago, but one that I had not thought about for a while. 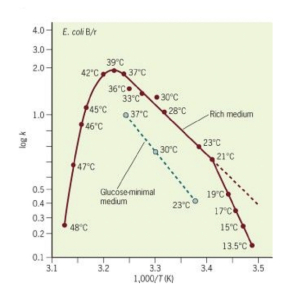 Figure 1. Effect of temperature on bacte­ri­al growth. Temperature (T) as the reci­pro­cal of absolute temperature (Kelvin [K]) is plotted against the logarithm of the growth rate as k. Specific values of the growth rate of E. coli B/r, a radiation re­sistant derivative of strain B. Note how it grows more slowly in minimal medium than it does in a rich medium, but the slope of the Arrhenius plot is nearly the same for both media. The minimum tem­pe­rature of growth for E. coli is 7.8°C. Source. Frontispiece: Fresh fallen snow. Photo ©Roberto Kolter

What immediately came to mind was to search for an Ar­rhe­nius plot showing the effect of temperature on bacterial growth. For that I went to my always reliable physiology re­ference: Microbe, 1st edition, by Elio, John Ingraham, and Fred Neidhardt. And there it was, a depiction of the effect of temperature on growth rate (see figure). The legends states: "The minimum temperature of growth for E. coli is 7.8°C." In explaining the reasons for the cessation of growth at low temperature the authors say, "much evidence suggests that initiation of protein synthesis is the vital cold-sensitive step for E. coli." Maybe. Maybe not. There may be another rea­son. In researching the topic, I came across a review by Da­vid Nedwell that offered a very different explanation. The alternative hypothesis the author presents is that growth stops at a low temperature because the affinity of trans­porters for growth-rate limiting substrates drops below the point where uptake can meet the minimum requirement. How does the author explain the drop in affinity of the transporters? As the membranes becomes stiffer at low temperatures, the transporter proteins lose flexibility and can no longer grab on to their substrate.

Are the two interpretations mutually incompatible? I do not think so. In media where the growth-rate limiting nutrients are present in high concentrations, transporter affinity may never drop so low as to limit uptake. Thus, initiation of protein synthesis might indeed be the vital cold-sensitive step. But in oligotrophic environments, frozen-stiff transporters may in fact be useless transpor­ters, leading to the cessation of growth. Those lowered affinities of cold transporters reminded me of my hands attempting to pull the brakes on my bike while riding in Boston's icy winters. Not only painful, potentially growth arresting!