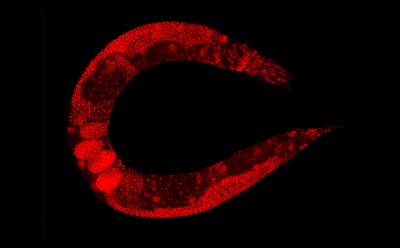 Fig. 1. Wild-type C. elegans hermaphrodite stained with the fluorescent dye Texas Red to highlight the nuclei of all cells. Source.

Not long after participating in the dis­cov­ery of mRNA and the triplet code, Sydney Brenner set out to study "how genes might spe­cify the com­plex struc­tures found in higher organ­isms." Those are the words in the open­ing sen­tence of his 1974 foun­dational paper, which estab­lished the nema­tode Caenorhabditis elegans as a model system for develop­mental and behav­ioral gene­tics. History proved that not only did he choose the right organ­ism, but he also chose the right ques­tions to ask. Today's thriv­ing com­munity of "worm scien­tists" is testa­ment of his legacy. From the outset he spel­led out the strain of C. elegans to use, the compos­ition of the agar medium and even the bac­terial food for the worm, a strain of Escherichia coli B. For half a century, C. elegans invest­igators have used the same strains and growth con­ditions. In so doing, they have achieved out­standing reprod­ucib­ility and major advances. All this won­derful science did come at a price; the ecology of the nema­tode was largely dismissed. But not by all.

For several years, studies on the natural history of C. elegans advan­ced but some­how, they were out of the lime­light. That changed in 2015. As part of a series on the natural his­tory of model organ­isms pub­lished in eLife, Lise Frézal and Marie-Anne Félix wrote an article on "C. elegans outside the Petri dish," describ­ing the worm's natural life­cycles and habitats. While they did not directly spell it out, the article prac­tically shouts out the question: what about C. elegans' micro­bial partners? Then, in 2016, almost as if the article had served as a catalyst, three groups (Shapira, Schulenburg and Ruvkun) pub­lished papers attempt­ing to define the micro­biome of C. elegans. Now, each group could have con­tinued working separ­ately. The beauty in this case is that they joined forces and pub­lished a joint paper in 2017 synth­esizing the signifi­cance of their three ap­proaches and outlin­ing the future chal­lenges. And here is the clincher. In 2020 they published the descrip­tion of "CeMbio - The Caenorhabditis elegans Microbiome Resource" and made the resource widely avail­able. This is a synth­etic com­munity of twelve bac­terial strains that rep­resent the core micro­biome of C. elegans, along with an enor­mous amount of ground­work character­ization of the strains and their inter­actions with their host. Indeed, a won­derful gift to the scien­tific com­munity at large. I have been advo­cating for years that many groups should work on one model synth­etic bac­terial com­munity. I think this is the one. I am hoping it will attract the atten­tion of many groups world­wide. If that happens, I'll be cheering from the side­lines!