This is the third and final installment of this year's Diazomania. The prior two Mondays I discussed the nitro­gen cycle and the nitrogen fixer Trichodesmium. If you bike a lot, particularly if you race, you learn to always carry along a spare inner tube and a CO2 canister to help you rapidly change a flat. So, when I started noticing empty gas canisters while riding along a few of the ubiquitous Co­penhagen bike lanes, the first thing that came to mind was: "watch out, people must get a lot of flat tires around here." But it made no sense; there seemed to be too many canis­ters and most Danes are not prone to leaving trash around. Then I noticed that I encountered these forlorn objects more frequently along the lanes traversing the "seedier" parts of town (if you can call them that in a city as impeccable as Copenhagen). I looked into the matter, eventually realizing that the canisters had not contained CO2, but rather N2O, nitrous ox­ide. It was news to me that nitrous oxide recreational use was back en vogue, a large scale reprise of Humphry Davy's "laughing gas parties" at the turn of the 18th century. Nowadays, ostensibly sold as an agent for making whipped cream and other culinary foams, many of these canisters end up de­livering a laughing party drug. Despite its usefulness in dentistry as an anxiolytic, I have to say that nitrous oxide is "no laughing matter." Because nitrous oxide is a powerful greenhouse gas. 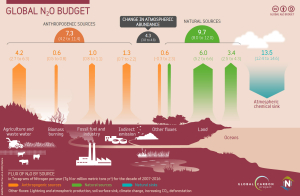 Nitrous oxide is the third most abundant greenhouse gas in the atmosphere after carbon di­­oxide and methane. While the amount of nitrous oxide is nowhere near that of carbon di­oxide, it has a warming potential nearly 300-fold greater, making its greenhouse effect quite large indeed. Where does all that nitrous oxide come from? From a global per­spective, about half of it comes from anthropogenic sourc­es. Mind you, that is not because humans synthesize huge amounts of it. It is because certain human practices lead to its increased production. As the population increased, large scale agricultural practices and – to a lesser extent – waste­water treatment also increased, and nitrous oxide emis­sions inevitably increased. Recall that since the invention of the Haber-Bosch process to convert nitrogen gas into ammonia a little over one hundred years ago, the use of synthetic fertilizer explod­ed. As we (over)use an estimated 100 Tg of fertilizer in industrial agriculture a year, soil and water microbes ready to use that fixed nitrogen will do just that. Therein lies the problem.

(Click to enlarge)
Figure 3. Denitrification generally pro­ceeds through some combination of the following half reactions, with the enzyme catalyzing the reaction in parentheses. Source

Nitrous oxide forms part of the nitrogen cycle. Denitrifying microbes convert nitrate to nitrogen gas. This denitrification does not happen in a single step. Rather, the conversion is through a combination of half reactions catalyzed by different reductases. Nitrate is first reduced to nitrite. Ni­trite can then be reduced to nitric oxide (NO). Two mole­cules of NO are transformed into nitrous oxide which in turn is reduced to the final product, nitrogen gas. But, NO and N2O being gases, some fraction of those produced during denitrification escapes into the atmosphere. Yet, denitrifying bacteria do not appear to be the major producers of nitrous oxide. That role seems to be played – somewhat surprisingly to me at least – by the nitrifiers. 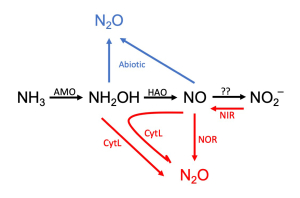 Nitrifiers carry out the two main oxidation steps that con­vert ammonia to nitrite (NO2) and nitrite to nitrate (NO3) (for an over­view see Diazomania I). They are thus the key microbes that encounter and deal with the massive increase in ammonia in soils due to current agricultural practices. This has led Michael Wagner, a leading figure in nitrifier research, to refer to them as "the gatekeepers of the nitrogen cycle." And what these bacteria (and archaea) do with all that ammonia is fascinating. The oxidation of ammonia to nitrite involves three steps (shown in black in the figure). The two intermediates, hydroxyl­ami­ne (NH2OH) and nitric oxide (NO) can serve as substrates to produce nitrous oxide (N2O). Through abiotic mechanisms, a low amount of nitrous oxide is always produced. But, most of the nitrous oxide is produced when nitrification is actually running in reverse, in a process paradoxically named "nitrifier denitrification," where nitrite is reduced to nitrous oxide via nitric oxide by the corresponding reductases NIR and NOR. In addition, a recent paper showed that the long-known cytochrome P460 (CytL) of the nitrifier Nitrosomonas europea catalyzes the conversion of both hydroxylamine and nitric oxide into nitrous oxide. The presence of these nitrous oxide-forming pathways in nearly all ammonia oxidizing bacteria suggested that formation of this greenhouse gas will always be associated with nitrification.

That notion changed with the isolation of bacteria that carry out both steps of nitrification, ammo­nia oxidation and nitrite oxidation. As I mentioned before, for more than a century microbiologists were under the impression that these two steps had to be carried out by separate microbes. Then came the discovery and culturing of Nitrospira inopinata that singlehandedly carries out the com­plete oxidation of ammonia to nitrate (COMAMMOX). Having a pure culture of the organism, re­search­ers set out to determine just how much nitrous oxide it produced. An exciting recent paper suggests that COMAMMOX are indeed "green" nitrifiers in that they produce very little nitrous oxide, only through the abiotic pathway. A key insight came from comparing the genome of N. in­opinata to several genomes from candidate (uncultured) COMAMMOX as well as genomes from conventional ammonia oxidizers. The genes encoding nitric oxide reductase (NOR) and cyto­chrome P460 (CytL) were almost universally missing from COMAMMOX, strongly suggesting that these bacteria will not make nitrous oxide. They followed these comparative genomics studies with extensive physiological experiments with N. inopinata demonstrating its inability to produce nitrous oxide enzymatically. Will this discovery prove helpful in reducing nitrous oxide emissions due to agriculture? The authors point towards a possible solution: "Consequently, adoption of conditions that favor the growth of complete nitrifiers over ammonia oxidizing bacteria, for ex­ample, in engineered systems and in soils where comammox bacteria have been identified, may influence nitrification-dependent N2O emissions." That certainly sounds like a feasible approach. In my view, however, the root of the problem still lies in the overuse and abuse of synthetic fer­tilizers worldwide. Sadly, estimates are that less than 20% of the nitrogen applied as fertilizer ends up in the food we eat. The rest mostly leaches or goes up into the air. Establishing more efficient ways of using synthetic fertilizers in agriculture would go a long way towards alleviating the nitrous oxide problem. If that were to happen, I would not laugh, but I would certainly smile.