In one step from commensal to mutualist (almost), part 1|2 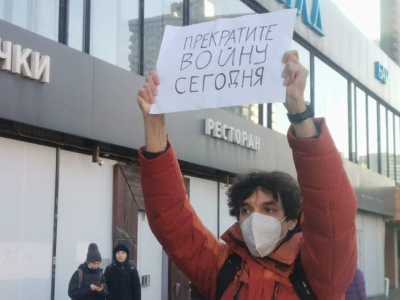 My neighbors' house is set on fire, with the imminent threat of 'collateral damage,' that is, killing them. Try to imagine where my thoughts are at the moment. So, as I write these lines in mid-March I will try a balancing act and ask for your forbearance if I don't quite succeed. I wish to express my deep respect for the Ukrainian and Russian people, among them scientists, who are resisting the long smoldering, and by now fully flared-up war within the limits of their abilities... and many beyond. To name one, Georgii Bazykin, an evolutionary biologist/bioinformatician and professor at Skoltech University, Moscow, Russia protested against the war in Ukraine on February 27th (Figure 1) and said shortly after on Twitter: "...I was released till the trial 10 hours after detainment. Minor inconvenience compared to what people of Ukraine face now, or what the world including Russia will face if Putin has his way." (I haven't heard from Georgii since Twitter was restricted/shut down in Russia following March 4th.)

Astounding Escherichia coli  It is as true as it is, well, boring to keep saying that Escherichia coli is the best understood unicellular organism, and the most-studied with ~41,000 tagged entries in PubMed since 1932. But then, every five years or so, comes a surprise of what un­expected feats this unassuming bacterium is capable of. Since 2007, when Elio started this blog, we learned that E. coli can be persuaded to equip a good part of its membranes with lipids of the archaeal variant, without nagging about being forced into a bacterial-archaeal hybrid, sort of. A surprise. And we learned that E. coli can be taught to endocytose, a property commonly considered a hallmark of eukaryotes. Another surprise.

We also learned that it takes just two mutations in the hupA gene, two amino acid substitutions in the nucleoid-associated protein HU, to convert a commensal, non-invasive K-12 lab strain into an invasive strain much like its cousins from the EHEC, EIEC, EPEC et al. clan of E. coli pathogens but luckily lacking much of their pathogenicity. Now, yet another surprise, Ryuichi Koga and colleagues from Takema Fukatsu's lab at Japan's 産業技術総合研究所 (AIST, Tsukuba) show in their recent stu­dy that a "Single mutation makes Escherichia coli an insect mutualist" (BioRχiv preprint.) If you sus­pect that this has something to do with symbiosis, which always "triggers" us here at STC, you are absolutely right! 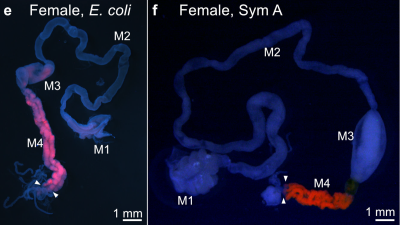 The Plautia stali─Pantoea sp. symbiosis  Plautia stali is a genus of phytophagous (=feeding on plants) stinkbugs of the Pentatomidae family that is found primarily in South and East Asia and Oceania. It was first described in 1864 by the Swedish entomologist Carl Stål, thus its name, and can be relatively easily reared and maintained in the lab (the frontispiece depicts three adults and one nymph.) P. stali collected from the wild harbor Pantoea bacterial symbionts, Enterobac­tera­les of the Erwiniaceae family. For your orien­tation, see here for a recent phylogeny of the Entero­bac­terales; you will immediately spot many of the 'usual sus­pects,' including Pantoea's "second cousin" E. coli.

In male and female P. stali, the Pantoea bacteria thrive extracellularly in specialized crypts of their M4 midgut segment, aptly named their 'symbiotic organ' (Figure 2f). Females transmit the Pantoea vertically to their offspring, that is, these are acquired by hatching nymphs when they feed on maternal extrachorion secre­tions (colloquially: poop) deposited on the eggs. Nymphs that fail to gobble up the Pantoea show atrophied midgut M4 segment crypts, reach dwarf size at best and remain brown in color; most die before reaching the adult, reproductive stage ─ 'imago' in entomology parlance ─ with the signature green-colored dorsal shields (see frontispiece.) Thus, P. stali depends on its Pantoea intestinal inhabitants for complete development. It is not known if and how the Pantoea profit from this arrangement.

Intermezzo: a symbiont tango  In a previous study from the Fukatsu lab, Hosokawa et al. (2016) investigated whether Pantoea sp. lineages found in different Plautia stali isolates collected across Japan could be interchanged with each other. Yes, they could. The authors found that symbiont elimination led to host mortality, while re-infection with the symbionts ─ via egg surface sterili­za­tion and symbiont supplementation in the drinking water for hatched nymphs ─ restored normal host growth. This indicated that the symbionts are indispensable and functionally equivalent. Go­ing one step further, they found by the same type of symbiont-replacement experiments that two free-living Pantoea, the soil isolate Pantoea dispersa and Pantoea agglomerans isolated from hu­man wounds, were both proficient in supporting survival and growth of a P. stali strain originally associated with the Pantoea 'Symbiont B' lineage. However, symbiont-replacement experiments were unsuccessful with Pantoea's "second cousin" Escherichia coli K‑12, and unrelated bacteria like Bacil­lus subtilis (Firmicutes) and the Burkholderia symbiont of the bean bug Riptortus pedes­tris (Betaproteobacteria), the latter colonizing the same M4 midgut segment in its host as Pantoea in P. stali.

98% of their 448 sampled P. stali bugs harbored just one out of six distinct Pantoea lineages, the remaining 2% harbored two. Lineages C, D, E and F were readily culturable in the lab and have genome sizes of 4.7–5.5 Mb, comparable to those of free-living Pantoea sp., while lineages A and B were not culturable on standard media and have reduced genomes (2.4 Mb, 3.9 Mb). An even more drastic genome reduction down to 1.2 Mb is known for "Ca. Pantoea carbekii", the symbiont of Halyomorpha halys stinkbugs in North America (another case where a bacterium that is not culturable in the lab remains in the rank of a Candidatus (Ca.)). More generally speaking, 'genome erosion' through pseudogenization and gene loss is a hallmark of many symbiotic (Ishikawaella 750 kb, Stammera ~250 kb) and most endosymbiotic bacteria (Buchnera 450–670 kb, Nardo­nella ~200 kb.) Hosokawa et al. (2016) concluded from their studies that they have tapped into an evolu­tionary transition from a free-living lifestyle of various Pantoea lineages to obligate mutualism with Plautia stali stinkbugs that is currently ongoing in nature.

Teaching E. coli to tango  Hosokawa et al. had found that E. coli was negative in a symbiont-re­placement experiment in P. stali (see above.) Koga et al. (2022) now found that very few nymphs were indeed infected by E. coli but had severely retarded growth and a high mortality. Several dwarf-sized insects managed to survive, mate, and produce a small number of eggs. Dissected animals had E. coli in their atrophic (=not fully developed) M4 midgut segment, and these bacteria were able to infect P. stali nymphs but, again, displayed low transmission rates and unstable in­fection titers in comparison to the original Pantoea symbiont. A borderline case of incipient sym­biosis? With P. stali as a proven "receptive" partner, Koga et al. considered an experimental evo­lution approach to "teach" E. coli to dance tango, to improve its symbiosis-related traits and finally evolve it into a symbiont‑like entity. The authors developed and performed a genuine "crash course" for the bacteria, outlined in Figure 3. Here is a brief run-through:

Furthermore, the colony morphology of E. coli changed from large and flat with rich extracellular ma­trix, visualized by LPS-staining with Congo red, to small and convex with little extracellular ma­trix (Figure 4c lower panel). When, in confirmation experiments, frozen E. coli stocks of CmL05 and GmL07 were inoculated to P. stali, the improved adult emergence rate, the greenish body color, and the small, convex colony shape were reproducibly observed (Figure 4e). These results indicat­ed that some mutator lines of E. coli had evolved mutualistic traits for the host insect and that the phenotypic effects are attributable to genetic changes in these E. coli lineages. Importantly, by the confirmation experiment, genetic changes on the part of the host could be safely excluded.

E. coli, accomplished dancer in a variety of styles   If you are a longtime reader of the blog, you've certainly noticed that the experimental evolutionary approach taken by Koga et al. (2022) closely resembles that of Rich Lenski and collaborators in the 'long-term evolution experiment' (LTEE) that we mentioned here and celebrated here. A reminder: in the LTEE, E. coli has been ad­apting to living in shake flasks under constant growth conditions since 1988, now at generation 75,000+ and still going strong. Likewise, in the Koga et al. experiment, E. coli had to adapt to pro­pagation in virtually identical Plautia stali "flasks," which for every infection cycle were taken from a mass‑reared inbred population. Just like bacteria from one growth cycle serve as inoculum for the consecutive cycle in the LTEE, bacteria from adult insects were prepared by Koga et al. for the infection of "stock" nymphs for the next passage in their hosts. 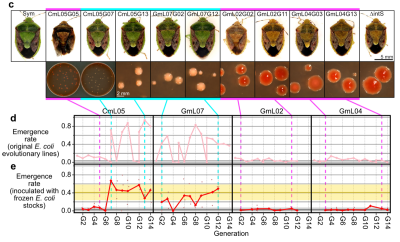 There are two differences though, which led me to call the Koga et al. approach a "crash course." First, they used an E. coli mutator strain to speed up the accumulation of po­tentially beneficial mutations in the first place. Second, they "cherry picked" hosts as source for better adapted E. coli lines (the greenest female, the first fully developed adult female.) Thus, they found improved E. coli lineages al­ready after seven (color) and two (growth) se­lection cycles. In contrast, in the LTEE, it took a (initially) non-mutator E. coli strain 31,500 ge­nerations to evolve the ability to use the citrate in the growth medium. "Initially," because mu­tator lineages popped up several times in var­ious lines but got lost later. Note, however, that the carefully measured numbers of E. coli generations in the LTEE cannot be directly com­pared to only roughly estimable E. coli generations within the P. stali hosts.

Despite the mentioned caveats, it remains an intriguing observation how few generations ─ and thus how few mutations ─ are apparently needed to convert a run-of-the-mill commensal into a fully competent P. stali mutualist. This is no less impressive when one considers that the Plautia stali stinkbugs are genetically conditioned by their long-lasting relationship ─ and I'm talking about evolutionary time scales here ─ with a range of symbiotic bacteria to the point where they cannot even carry out their own complete development without them (for ex­ample, the developmentally determined formation of a rudimentary M4 midgut segment that remains atrophic without bac­terial colonization).

This is only half the story, obviously. In part two, I will address what mutations the authors found in the "improved" E. coli lineages, and how they found out that theirs were anything but strange, fortuitous results. Meanwhile, you might re-read François Jacob's 1977 essay Evolution and tin­kering. You haven't read it yet? Here is a brief introduction, and here the PDF. Stay tuned.