« The Ugliest of Mushrooms | Main | A Women's-History-Month Read: Her Hidden Genius (Book Review) »

In 1938, after developing a keen in­ter­est in genes, Max Del­brück ar­rived at Cal­tech set to work on Dro­so­phi­la ge­net­ics with Tho­mas Mor­gan. But, as some­one trained in theo­re­ti­cal phys­ics, the pace of work­ing with fruit flies pro­ved too slow. For­tu­na­te­ly for the his­tory of mo­le­cu­lar bio­logy, Del­brück met Emo­ry El­lis who was using bacteriophages in hopes of understanding cancer. As a host bacterium Ellis had chosen Escherichia coli for the simple reason that one of Morgan's students happened to have it. The Ellis and Delbrück 1939 paper, "The Growth of Bacteriophage," set in mo­tion the formation of what would become the very familiar Phage Group, whose members includ­ed so many of the key investigators of the early days of molecular biology (Luria, Hershey, Watson, Meselson, Stahl, Benzer and Brenner, among others). By 1945, Delbrück began teaching his leg­endary summer "Phage Course." 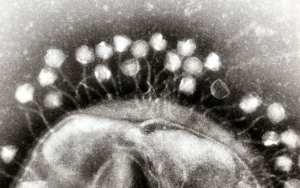 What is less known is the fact that in 1944 Delbrück came up with the idea of the "Phage Treaty." Noting that phage investigators from around the world each seemed to be fo­cusing on their "own" particular phage, Delbrück decreed that all members of the Phage Group, and later on all those who took the Phage Course, should agree to work exclu­sively with an E. coli B strain as host and study only the "T" phages. Moreover, phage growth should be studied exclu­sively at 37°C and in nutrient broth. While such rules might seem terribly restrictive (and eventually many investigators ventured elsewhere, witness E. coli K-12 and phage lamb­da), the fact that results could be compared across numerous laboratories and then easily build on each other's work, proved a remarkable force that moved the field of molecular genetics for­wards for nearly two decades and whose legacy is still felt today.

Why do I bring this up now? It's in connection to my recent post on the nematode's C.elegans mi­crobiome. I feel we are at a similar juncture today. We have wonderful microbiome work being done all over the world. But at times it seems as if almost everyone is trying to find their own spe­cial microbial community to study, to differentiate themselves from the rest. That is all fine and well. But I also think it would be extremely productive, for addressing some basic questions about microbial communities and host interactions, to have a few groups around the world focus their efforts on a simple synthetic community. I happen to think that the model nematode microbiome I presented recently in STC is ideally suited for such an effort. Hopefully, a few dozen researchers will rally around this resource. Perhaps there will be a nematode microbiome summer course and, who knows, some brave leader might even decree a nematode microbiome treaty!