In one step from commensal to mutualist (almost), part 2|2

I had concluded the first part by saying that I would now discuss what mutations Koga et al. (2022) found in two mutator E. coli lineages that allowed the bacteria to successfully "take over" from Pan­toea sp. as symbionts in Plautia stali stinkbugs (termed "improved" lineages.) Here we go... 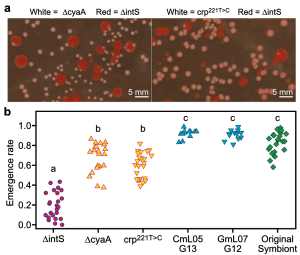 Two out of 1,052 mutations stand out   The authors de­tected 1,052 mutations (single-nucleotide polymorphisms (SNPs)) by genomic sequencing of four evolved E. coli lin­eages (two improved lineages CmL05 and CmL07, and two not-improved lineages) across the sampled P. stali pas­sages; the mutations were more-or-less evenly distributed among the four cell lineages. This is a convincing "hit rate," showing that using a ΔmutS mutator strain for their ex­pe­rimental evolution approach was certainly the right way to go. Note that already by the 2nd passage, these lineages were not bona fide clonal populations any longer as the bacteria were isolated in bulk from the M4 midgut segment from one female P. stali for feeding to nymphs for the next passage.

Accordingly, the authors found the majority of these mu­tations at low to middle frequency, and popping‑up in one generation while getting lost again in later ones. However, roughly ten mutations in either of the improved lineages CmL05, CmL07 were "kept" throughout the experimental series, that is, were rapidly fixated in the evolving E. coli populations once they had appeared in the 7th passage (CmL05) and the  2nd passage (GmL07). Of these, two mutations stand out: a frame‑shift mutation (G171fs) in the cyaA gene in CmL05, and a crp221T>C mutation (CrpL74P) in GmL07. Both of these affect the same regulatory circuit, carbon catabolite repression (CCR, more on this below).

"Reverse engineering" of the two mutations   To assess the extent to which these two mutations contribute to the mutualism phenotype of the improved cell lineages CmL05 and GmL07, Koga et al. (2022) reconstructed them in the ancestral genetic background of E. coli K‑12 BW25113 (to be precise, they obtained strain BW25113 ΔcyaA from the Keio collection.) When fed to P. stali nymphs, both the E. coli ΔcyaA and the crp221T>C mutants largely reproduced the mutualistic phenotype. The emergence rate of adult insects was roughly 70% of that observed for the improved E. coli lineages CmL05 and GmL07, or for the original Pantoea sp. symbiont (Figure 1b). Yet, the emerged insects were green­ish in color, comparable to the greenish insects infected with the improved E. coli lineages and distinct from the dwarf brown insects infected with the control, the E. coli ΔintS strain (Frontispiece).

Both reconstructed E. coli mutants form small convex colonies, with little extracellular matrix, like the improved E. coli lineages CmL05 and GmL07. The colonies are clearly distinct from the large and flat colonies with rich extracellular matrix of the ΔintS control strain (Figure 1a) and more like those of the CmL05 and GmL07 lineages (see part 1.) However, both reconstructed mutants achie­ved lower cell titers in infected insects than the improved cell lineages, an effect that remains unexplained.

Koga et al. (2022) performed a detailed analysis of the transcriptomes of the improved lineages CmL05 and GmL07, and two not-improved lineages, over the generations of the experimental series. They monitored changes of mRNA abundances of 3,400 genes, and found the most sig­ni­ficant changes at passage 7 for CmL05 (cyaA), and at passage 2 for GmL07 (crp), concomitant with the appearance of "improvement" in these two lineages. When they quantified gene expression changes of lineages GmL07 and CmL05 before and after improvement of host phenotypes, they found down-regulated genes for sugar transporters and curli fimbriae production (among others), and up-regulated repair/recombination genes (Figure 2). Importantly, they found a significant overlap of both up- and down-regulated genes for both lineages, likely because the cyaA mutation in the CmL05 lineage and the crp mutation in the GmL07 lineage affect the same pathway, CCR.

Carbon catabolite repression   Carbon catabolite repres­sion (CCR) is the highly complex regulatory circuit by which E. coli ─ and other bacteria, each in their own specific "dia­lect" ─ monitor the extracellular availability of various su­gars and regulate their uptake and shuffling into glycolysis (see this review for the overwhelming amount of known details.) A key step in this circuit in E. coli involves a direct molecular interaction of the glucose transporter EIIGlc, a multi‑subunit complex of cytoplasmic EIIAGlc and membra­ne‑bound EIIBCGlc, with adenylate cyclase, CyaA. During active glucose transport, EIIAGlc is unphosphorylated most of the time because its phosphate group, received from HPr, is instantly transferred to glucose (Figure 3a). If the influx of glucose subsides, EIIAGlc remains phosphorylated long enough to stimulate CyaA to form cAMP from ATP. cAMP then binds to Crp, allowing monomers to dimerize by an allosteric twist.

The cAMP·Crp (dimer) is capable of high‑affinity binding to DNA and can thus act as a transcription factor at promoters containing a cAMP·Crp recognition sequence (Figure 3b). For example, the lac promoter, whose transcription is activated by cAMP·Crp binding, signals: "we're running low on glucose, why don't we try lactose?" (And the Lac repressor confirms this by dissociation from the lac promoter if lactose is indeed present.) Both the ΔcyaA and the crp221T>C mutations found in­dependently by Koga et al. in the improved E. coli lineages CmL05 and GmL07, respectively, inac­tivate CCR, either by depleting the cells of CyaA or by having a Crp variant with the L74P mutation located in the N-terminal cyclic mononucleotide-binding domain. And this coincidence is exactly why the authors found these mutations that popped-up independently in their evolved E. coli lineages so interesting. 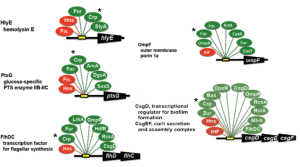 Beyond carbon catabolite repression   In addition to the key role that cAMP·Crp plays in CCR, more than 100 genes are now known whose expression is regulated by cAMP·Crp, the majority positively, that is, by activating their expres­sion. It is not an exaggeration to say that one is poking a wasps' nest when studying cAMP·Crp-regulated genes. This because the expression of many of these genes is not re­gulated by just two as in the lac operon (cAMP·Crp and LacI repressor) but by multiple, cross-talking transcription fac­tors and nucleoid-associated proteins (NAPs). And a fair number of these cAMP·Crp-regulated genes encode trans­cription factors themselves (therefore, a wasps' nest.) Fi­gure 4 shows several of such pinboard-like multi-factor promoters, and you see cAMP·Crp co‑regulation of the master regulator for flagellar synthesis, FlhDC, and of the CsgD/CsgEF operon, with CsgD being a master regulator for biofilm formation and CsgEF important for curli fimbriae formation/secretion. Thus, it is conceivable that two phe­notypic traits of the improved E. coli lineages GmL07 and CmL05, namely loss of swimming mo­tility and reduced biofilm formation, can be attributed to the crp and cyaA mutations, respectively, in these lineages. This even more so as these two traits were also found by Koga et al. for the two artificial crp221T>C and ΔcyaA strain constructs.

A final remark   Koga et al. (2022) found that a "Single mutation makes Escherichia coli an insect mutualist", and this is not a sensationalist title. Nevertheless, here are two caveats. For one, the insect in question, Plautia stali, was not naïve but, as I wrote in part I, primed to accommodate a bacterial symbiont by a long evolutionary history. This up to the point where the full development of the insect depends on a "matching" dance partner. For the other, a point mutation in a gene can affect one protein/enzyme in one discrete pathway ─ what most people intuitively think of when they hear of a "Single mutation..." But it can also affect, as is the case here, numerous re­gulatory circuits if the gene encodes a global transcription factor. I regard the observation that the re-wiring of existing regu­­latory circuits in a bacterium can lead to the formation of a viable mu­tualism with an insect host simply, well, fascinating. Not least because this was achieved with on-board means by tweaking a single transcription factor, and without lateral gene transfer.

And one last tango (from Paris)   I've come full circle now. But if you still haven't had enough, I can recommend that you read François Jacob's 2001 essay Complexity and tinkering (PDF), in ad­dition to his essay Evolution and tinkering to which I drew attention in part 1.