This image I captured of a result of mine reminds me of how important it is to keep one's mind open and let the results speak for themselves, even after making a mistake. As part of my re­­search I was conducting during my PhD with David Johnson and Dani Or, I was interested in study­ing how two bacterial strains, when co-cultured, grew and expanded across an agar surface while undergoing well-defined interactions. The emerging structures – the strains' spatial self-organiza­tion – can be analyzed to explain how microbial communities assemble to achieve specific ecosys­tem-functioning tasks. These so-called "range expansion" experiments belong, among many other types of experimental approaches, to synthetic ecology, a field in which synthetic biology is often (but not necessarily always) used to explore fundamental ecological questions.

In my experimental approach, I mixed two isogenic mutant strain of the denitrifying bacterium Pseudomonas stutzeri. One mutant (expressing a cyan fluorescent protein) could reduce nitrate and produced nitrite, but could not metabolize the nitrite further. The other mutant (expressing a green fluorescent protein) could not reduce nitrate but could consume nitrite. When incubated at pH 6.5, nitrite becomes toxic, therefore these two strains engaged in a mutualistic interaction that gave rise to mixed patterns, which allowed me to test whether positive interactions can maintain diversity under various environmental conditions. 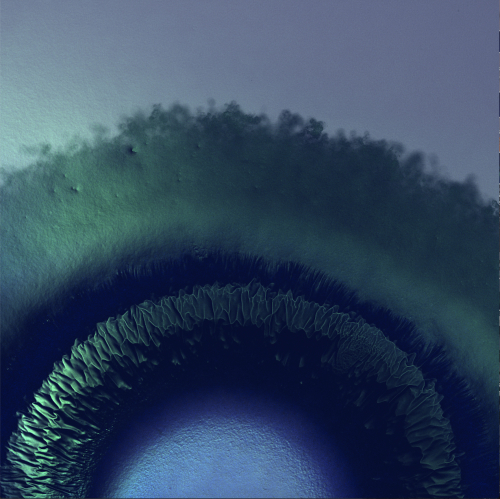 At the very early stage of my PhD, when I was still testing experimental conditions, in this one ex­periment, I made a mistake during the preparation of the growth medium. I used less agar than the recipe called for (I used a Modified Basal medium amended with 1 mM of nitrate, pH adjusted to 6.5 using MOPS, but contained an unknown agarose concentration that I presume was lower than 1%). After the bacteria grew, I acquired the image with an old but glorious Leica SP5 Confocal Microscope, where I combined, together with fluorescence channels, a bright field and reflected light. The latter, colored in gray, gives a three-dimensional depth to the colony, and adds a bit of shading effect that results in a quasi-natural illumination. The bright field, also colored in gray, restores the texture of the biomass that would otherwise disappear in the fluorescence channels. None of the channels were enhanced or post-processed. I was surprised and shocked by the beau­ty of the patterns I observed. The landscape that lay before my eyes was like nothing I had seen before. The colony developed a shiny central doughnut, where both strains probably mixed, and then the bacteria moved into the agar and, I presume, expanded via active movement. The patterns that emerged in this experiment were unexpected. As scientists, we cannot help but get extremely excited on the occasions when we obtain unexpected observations that open new re­search directions. 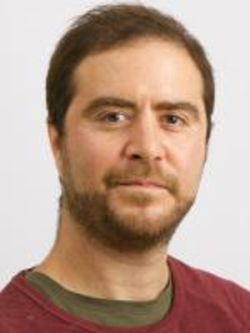 Davide Ciccarese is a postdoctoral associate in Andrew Babbin's lab in the Earth, Atmospheric and Planetary Sciences Department at MIT studying micro-scale eco-evolutionary dynamics and their influence on macro-scale biogeochemical cycles. In 2020 he obtained his Ph.D. at ETH, work­ing with David Johnson and Dani Or, studying the mechanisms of micro­bial spatial self-organization.