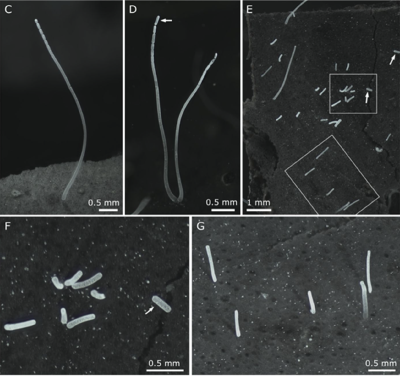 Figure 1. Light micrographs of "Ca. Thio­margarita magnifica" attached to sunken leaves of Rhizophora mangle. C,D Detail of budding cells showing a gradual con­striction at the filament apex. The termi­nal segment (arrow) is still attached to the mother cell on D and has just been re­leased into the water column for dis­persion on B. E Area of a sunken leaf with 10 recently released terminal segments (arrows) and newly settled filaments of va­rious sizes. Note that these young fila­ments (<3 mm) are not displaying apical con­strictions yet. The two rectangles' are­as are shown at higher magnification on F and G. Source. Frontispiece: Specimens of the bacterium "Ca. Thiomargarita mag­ni­fica", next to a ten-cent coin. ©Tomas Tyml. Source

A centimeter-long bacterium with DNA...   You don't ne­cessarily think "mon dieu, des microbes!" when you see tiny whitish threads the length and diameter of eyelashes on Rhi­zo­phora mangle leaves while diving among the man­gro­ve shallows by the coast of Guade­loupe island, Lesser An­tilles (which belongs to France.) Or when you see them "por­trayed" next to a dime, as on the frontispiece. Gatherings of nematodes come to mind, or colonies of ciliates, or of ma­rine fungi. As a marine biologist you may eventually think of filamentous cyanobacteria like Anabaena or Oscillatoria, but these do not appear whitish when you see them float­ing in the water. There are in fact visible filamentous bac­teria that appear whitish ─ they contain sulfur granules aplenty, thus whitish ─ and eventually form sessile colonies like Thiolava ve­neris ("Venus' hair"), a member of the larger Thioploca clade of filamentous sulfur‑oxidizing bacteria (see here and here in STC.) And finally, there are these beautiful chains of "sulfur pearls", strung giant globular cells of Thio­margarita species that reach up to 0.75 mm in diameter (Merry wrote about them here.) So, who are these tiny whitish threads you see in Figure 1, some of which reach 1 cm or more in length? 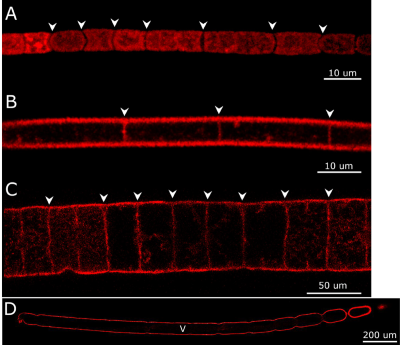 Figure 2. Confocal laser scanning micro­scopy (CLSM) observations of three mul­ticellular large filamentous bacteria after fluorescent labeling of mem­branes using FM 1-43x dye. A The se­parations be­tween the cells (white ar­row­heads) of the Cyanobacterium Mi­cro­­­coleus vaginatus are clearly visible after FM 1-43x staining. B The mem­brane septum separating the vacuo­lated cells of a Beggiatoa-like fila­ment are clearly stained by the mem­brane dye. C The membrane septum se­pa­rating the large vacuolated cells of the Ma­rithrix-like bacterial filaments are clear­ly stained by the membrane dye. D CLSM observation of "Ca. Thiomargarita magnifica" cell K after fluorescent label­ing of membranes with FM 1-43x show­ing the continuity of the cell from the ba­­sal pole to the first complete constriction at the apical end. Source

16S sRNA phylotyping revealed that "Ca. Thiomargarita magnifica" is a member of the genus Thiomargarita, with "Ca. T. nelsonii" being its closest relative (both with the "Candidatus" pre­fix, formally, as they are yet uncultivated.) The researchers were in for no small surprise when they looked at these filaments ─ now under the microscope ─ stained with the common fluo­rescent membrane dye FM 1-43x (Figure 2). Unlike the bacterial filaments used as con­trols, the T. magnifica filaments showed no septation at all (note the different scales in panels A─D in Figure 2.) A single Thiomargarita magnifica cell as in panel D with a length of ~2 mm and a width of ~50 µm is, well, simply magnificent. The authors saw even longer filaments as those shown in Figure 1, the longest one was about 2 cm long. Let that sink in.

You see in Figure 1 single cells attached by one end to their substrate, the Rhizophora mangle leaves, while the apical end shows rather regular constrictions (seen particular well in Figure 5D). Volland et al. observed that the terminal buds are eventually dropped. They con­clude from length mea­sure­ments of such terminal buds and the smallest sub­stra­te-attached fila­ments, which were in good agreement, that T. magnifica has a dimorphic life cycle: a sessile mother cell and dispersive daughter cells. They explicitly refer to the dimorphic life cycle of Caulobacter ─ the sessile stalk cell produces swarmer progeny cells ─ but clear morphological distinctions are not evident in T. mag­nifica mothers and daughters and, for example, it is not known if the daughters have a preferred cell pole for attachment to the substrate. 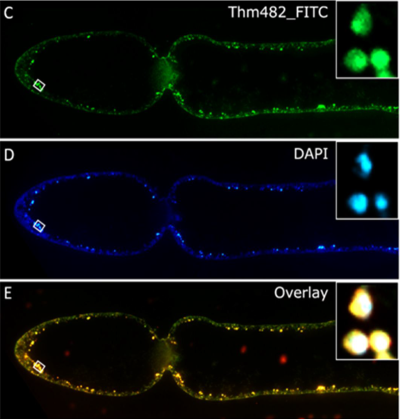 Figure 3. Fluorescence In Situ Hybridiza­tion (FISH) with probes targeting Thio­mar­garita, a genus within Gamma­pro­teo­bacteria (C, probe 5 Thm482 labeled with FITC); and DNA staining with DAPI (D); on a longitudinal section of the api­cal end of a "Ca. Thiomargarita magni­fica" cell. On this longitudinal section pepins are pre­sent in the cytoplasm of the terminal segment as well as in the stalk before the constriction. Note that the terminal seg­ment, like the rest of cell, presents a large central vacuole which occupies most of the cell volume. The pepins la­beled with all the probe and DAPI are shown by the overlay (E). The detail of the three pepins in the white rectangle is given in the top right insert. Note that no epibiotic bacteria are detected with FISH. Source

Vollard et al. probed cells with a fluorescent Thiomargarita-specific probe and DAPI to localize DNA. The signals they obtained were evenly distributed as "dots" along the entire cell length, and exclusively localized in a narrow strip ─ actually more a layer since cells are three-dimen­sio­nal ─ just below the cell wall (Figure 3). More than 70% of the cell volume is occupied by an enormous vacuole that extends through the entire length of the cell, including the apical seg­ment. This appears to be a "family trait" because the globular Thiomargaritas also have this huge vacuole, which restricts the space for the bacterial cy­toplasm to a narrow layer just be­low the cell wall.

They assumed that the strongly fluorescent "dots" in Fi­gu­re 3 are nucleoids that contain one or more genomes, de­pending on the signal intensity. By counting the dots and normalizing their size, they were able to calculate the ap­proximate genome copy number in a cell: on average 37,000 (±8,000) genome copies per millimeter of filament. That's what I call polyploidy! A Gedankenexperiment: if you stuff such a millimeter of T. magnifica, just the cytoplasmic cytoplasmic layer of course, with E. coli cells with one chro­mosome each you would end up with approximately 25,000 genome copies. The "action radius" of a genome for its tran­scrip­tion and translation products is thus largely compar­able in both cases.

The incipient constriction of the apical cell segment is clearly visible in Figure 3, but this con­stric­tion spans a distance of ~50 nm across, and it is therefore clear that this cannot be a con­ventional cell division of "normal" rod‑shaped bacteria like E. coli or B. subtilis (unfortunately the authors give no explanation for the cloudy staining of the septal region.) In the nearly completely sequen­ced genome (~12 Mb) of T. magnifica, Volland et al. found the dcw gene cluster, including ftsZ, con­served but the ftsA, zipA, and ftsE─ftsX genes encoding divisome proteins required for tethering the FtsZ ring to the septal membrane lacking. Also missing were the "late" divisome genes ftsI and ftsW, ftsQ, ftsL, ftsB, and ftsK. In contrast, the set of genes encoding cell elongation proteins was "complete", while three were even duplicated "in situ", that is, the duplication located directly ad­jacent to the original (a replication slippage?). Apparently, cell division by budding in T. mag­nifica follows a so far unknown route, and particularly the role of FtsZ in this division process would be well worth studying.*) 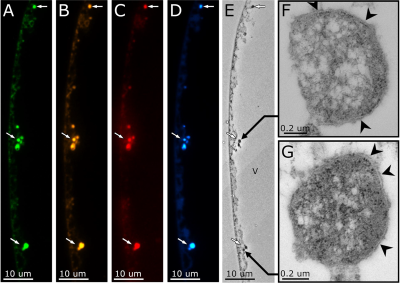 Figure 4. Characterization of the pepin organelles by FISH and correlative TEM as well as membrane and DNA staining. A─D: Pepins (arrows) in the cytoplasm of "Ca. T. magnifica" (class Gammapro­teo­­bacteria) are labeled with the gene­ral bacterial probe EUB labeled with Alexa Fluor 488 (A, green), Gamma­pro­teo­bac­teria specific 5 probe Gam42a labeled with Cy3 (B, yellow), Thiomar­garita-spe­cific probe Thm482 labeled with Cy5 (C, red) and with DAPI (D, blue). E TEM of a serial thin section con­secutive to the semi-thin section used for FISH. The FISH and DAPI positive pe­pins appear as elec­tron dense organ­elles under TEM. F,G Pepins (from E) under higher magni­fi­cation; pepins are delimited by a mem­brane (arrowheads) and contain numer­ous ribosomes which appear as small electron dense gran­ules. Source

...with DNA compartmentalized in membrane-bound organelles   A closer inspection of T. magnifica's cytoplasm by CLEM (correlative light‑electron microscopy) revealed that its genetic material is concentrated in compact nucle­oids that align along the vacuolar membrane as single or small groups of "blobs" with more irregular spacing over the entire cell length (Figure 4, A─E). In Figure 5 D+G, it is clearly visible that these blobs also contain many small electron dense granules, confirmed to be ribosomes by FISH with probes targeting Thiomargarita rRNA sequences. The blobs virtually bulge the membrane of the vacuole, and it almost looks as if they were safely put in a kangaroo pouch. This is highly remarkable since bacterial nucleoids are usually con­fined to much smaller cell volumes where they appear to occupy a considerable percentage of the cytoplasm and are embedded in a "ribosome soup" (see here in STC.) Yet, as Xiang et al. (2021) have shown, the bacterial cytoplasm is a "poor solvent" for nucleoids and the notion of Volland et al. (2022) that they are "...spread throughout the cytoplasm, as is com­mon in bacteria" is a misconception.

My skepticism about the authors' claim that the genome of T. magnifica is localized in mem­brane-bound compartments ─ which they call "pepins" ─ stems from the fact that their techni­cally excellent EM images do not show a continuous membrane, at least not in one focal plane (Figure 4, F+G). I vividly recall that such a compartmentalized, that is, membrane-enclosed ar­rangement of the nucleoid was pro­posed for Gemmata obscuriglobus (Planctomycetes) (see here in STC.) It later turned out that the inner membrane of Gemmata is intricately invaginated but does not enclose the nucleoid (see here in STC.)

The Vollard et al. paper is currently a preprint, and it is difficult to gauge which of their claims re­garding the "pepins" will stand up to reviewer scrutiny. To be clear, we at STC do not see ourselves in that role. Anyway, as microbe enthusiasts, we rejoice at every new find that shows us that the Small Things keep crawling out of every drawer we try to put them in. Today's drawer: the minimal and maximal size of single bacterial cells (see here for a recent review by Petra Levin and Esther Angert.) Thiomargarita magnifica busts the upper size limit carefully calculated by Kem­pes et al. (2016) and is – or can be, as there is no defined unit cell length for this bacterium – quite a bit longer than Elaine Newman's famous E. coli  metK mutant (~750 mm).

*) Perhaps it is not impossible that FtsZ rings can enclose and constrict a cell diameter of ~50 nm after all. I came across an older paper by Szwedziak et al. (2014) in which the authors describe that overlapping FtsZ fi­laments can form a complete ring in liposomes, with a ring diameter of 90 nm. However, in this artificial sys­tem, the inside of the liposomes was "adorned" with FtsA oligomers, which promoted the attach­ment of the FtsZ fila­ments. T. magnifica lacks FtsA, and thus my question above remains unanswered for now.