Nailing the twists of a twisted nails puzzle, part 2|2

I had almost solved the twisted nails puzzle in the first part. I had untwisted the function of the first nail, spot 42 RNA, as well as the function of the second nail, the open reading frame contained within this 'dual‑function RNA' that is translated as the SpfP protein. Here now are two more twists…

One more twist   Aoyama et al. (2022) had observed somewhat higher levels of SpfP at 42°C and 45°C as com­pared to lower growth temperatures, and wondered if the importance of the sRNA versus the mRNA activities of spf varied depending on the growth temperature. This was an obvious thing to check, since it is known that RNA‑RNA interactions via base pairing are highly temperature de­pendent (see our recent, that is, pre‑pandemic post Of Terms in Biology: RNA Thermometer.)

They examined by immunoblotting how their overexpres­sed spf variants affected the expression levels of a tagged fusion protein, GalKtag (chromosomally, under control of the gal promoter), at 30°C, 37°C, and 42°C. They observed that 'SpfR·SfP' was less effective at reducing GalKtag levels at 42 °C, while 'SpfR·SpfP' overexpression led to strong repres­sion at all tempe­ra­tures. Overexpression of 'SpfR·SpfP' led to similar but slightly less GalKtag repression at all tempe­ratures, while 'SpfR·SpfP' had no effect on GalKtag levels (Figure 1). The authors interpret these results to mean that base pairing is more effective at repression at lower tem­peratures and that translation of spf can interfere with base-pairing activity at higher tempera­tures. It strains the imagination how such an intricate multi-layered regulation could evolve, but it did, apparently. 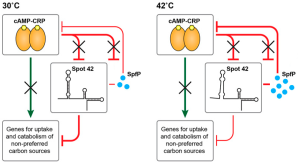 I will not miss to mention that shortly before the publication of Aoyama et al. (2022), a paper was published by the lab of Kai Papenfort at Friedrich-Schiller-Universität in Jena, Ger­ma­ny that characterized a dual-function sRNA from Vibrio cholerae, VcdRP (see this post.) Like Spot 42, VcdR RNA plays a role in the control of cAMP·CRP regulated genes while VcdP protein regulates the activity of GltA, the first enzyme of the citric acid cycle. Sure enough, Vibrio cholerae also has a Spot 42 ortholog as have numerous other Gammaproteobacteria. Alas, so many more twisted nails puzzles!

A final twist   Aoyama et al. (2022) state at the end of their paper: "Given how extensively CRP has been studied, it is in­triguing that SpfP was not detected previously, although it is worth noting that a repressive, low‑molecular‑weight ca­ta­bolite modulator factor was described decades ago (33)." In the cited paper, Ullmann et al. (1976) describe the partial purification of a 'catabolite modulator factor' (CMF) that was achieved by (1.) re-suspending E. coli cell pellets in water (pH 8.0), (2.) boiling the suspension (25 mg dry weight /mL) for 12 min, (3.) high‑speed centrifugation for the removal of cell debris, denatured chromo­so­mal DNA and RNA, and (larger) proteins, and (4.) passing the supernatant over a cation exchange column. Only small RNAs like tRNA, some RNases, and oligopeptides/small proteins are likely to resist such 'physical abuse' (an expression from the 1st Ed. of "the Maniatis", p. 189.) Addition of CMF to a culture of glucose-grown and IPTG-induced E. coli did not affect the growth of the cells but resulted in a reduction of β‑galactosidase synthesis by up to 90%. Old observations can have surprising repercussions, and it would have been neat if Aoyama et al. (2022) had repeated these experiments to see if their SpfP is indeed CMF. Yet grants and their terms usually don't allow for such 'archaeological excursions.' 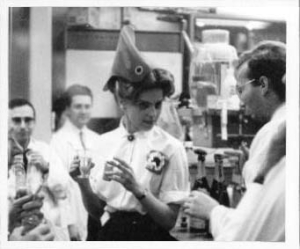 The first author of the CMF paper was Agnès Ullmann (1927 – 2019) who, following her secretive and adventurous flight from Hungary after the "intervention" of the USSR in 1956, worked beyond her retirement in Paris at the Institut Pas­teur, especially on the role of cAMP and CRP in catabolite repression. In most textbooks, Jacques Monod and François Jacob are celebrated for their lac operon model of gene re­gulation and the special role of the repressor, LacI. Rightly so, but the whole thing only makes sense if one includes ac­tivation of lac transcription by cAMP·CRP. Monod, Jacob and Ullmann were well aware of that.

A teeny bit more archaeology? If you have done cloning experiments with E. coli in the lab yourself, you are certainly familiar with the blue-white selection of transformants. Did you know that this goes back to a pa­per by Agnès Ullmann et al. (1967), the 'et al.' being François Jacob and Jacques Monod ? They found that deletion of the N‑terminus of LacZ (ω‑peptide) results in inactive β-galactosidase, but supplying the LacZα N‑terminus (α‑peptide) in trans restores full β-galactosidase activity (as you might have guessed already, Agnès Ullmann was one of my scientific heroines.)