Figure 1. Detection of nanomotion of sin­gle bacteria by graphene drums. a Sche­matic of the interferometric measure­ment setup used to record the nano­motion. OSC and PD stand for oscil­lo­scope and photodiode, respectively. b Op­tical microscope image of an array of suspended drums with adhered E. coli. Scale bar, 20 μm. Source. Frontispiece: Tony Allen on drums. Source

All living organisms oscillate at a nanometric scale, but do not confuse this with Brownian motion. In the burgeoning field of nanomotion research, the preferred measurement methods are based on atomic force microscopy (AFM), by which surfaces are scanned with a cantilever. Irek E. Rosłoń and colleagues from Delft University of Technology, Delft, the Netherlands took a different approach in their recent study: Probing nanomotion of single bacteria with graphene drums.

Scientists should be cautious with certain adjectives, I know, but graphene is a wondrous material: a single layer of car­bon atoms arranged in a two-dimensional honeycomb lat­tice. Due to its ex­ceptionally high tensile strength combined with the easy deformability as a molecular monolayer, it is excellently suited to react to minuscule impacts that lead to oscillations in the nanometer range. Rosłoń et al. set out to build a "drum" to sense such oscillations caused by movements of micrometer-sized bacteria as they wriggle on a graphene sheet, much like on a drumhead (Figure 1a). The drum "body" was a silicon chip as support for a 285 nm thick SiO2 sheet in which circular cavities with a diameter of 8 μm were etched. To record the oscillations over time, they used laser interferometry (not un­like in the famous LIGO experiment measuring cosmic gravitational waves but with the experi­men­tal setup, of course, at a considerably smaller scale.) Figure 1b shows a microscopic image to give an impression of the size ratios of individual E. coli cells, fixed by (3‑Aminopropyl)triethoxy­silane (APTES) onto the graphene layer, and the actual area of the graphene "drumheads".

Rosłoń et al. thought that of all possible sources of na­no­motion of a bacterial cell, motion by beating flagella might be the easiest to observe and the source unambiguously pinpointed. When assayed on their "drums," cells of a hy­per-motile E. coli strain with a larger number of flagella com­pared to wild type (for the geneticists: an IS1 insertion in the regulatory region of the fhlDC operon encoding the master regulator for flagella synthesis), showed the highest motion amplitude (σ) with ~60 nm, and, over the measuring period of 1 h, a median of σ = 13.4 nm. Addition of cada­ve­rine, which has an inhibiting effect on the ion flux driving the flagellar motor, reduced the median to σ =7.0 nm (Fi­gure 2b). A minimally motile strain that lacks the regulatory IS1 element for flagellum synthesis had nevertheless a me­dian motion amplitude of σ = 12.6. Both a non-motile strain with disabled flagellar motors (ΔmotAB) with σ = 5.3 nm and a flagella‑less strain with functional motors (ΔfliC) with σ = 2.6 nm were clearly incapacitated (Fi­gure 2c). The authors concluded that the observed differences in na­nomotion are mainly induced by the activity of flagella, since the nanomotion disappeared in the flagella-less strain and the am­plitude clearly correlates with the activity of the flagella.

Next, they challenged the drumming capabilities of a classic E. coli K‑12 strain, AB1157, and a ka­namycin‑resistant derivative with antibiotics. They found that active drumming for ~1 h stopped quickly, that is, within minutes after their addition. Rifampicin inhibits transcription (Figure 3b), Ciprofloxacin inhibits gyrase thus reducing the "life-saving" negative superhelicity of the chro­mo­some (Figure 3c), and both kanamycin and chlorampheni­col inhibit translation. Kanamycin had no effect on drumming in the KanR-strain, as expected, while subsequent addition of chloramphe­ni­col had (Figure 3d). The authors do not indicate the antibiotic concentrations used in these ex­pe­riments but they mention that the cells were not viable after antibiotic treatment, as the motion did not increase back to its original level when the antibiotic was flushed out.

Would you be interested in listening to the E. coli cells drumming? The authors prepared an ani­mation in which they used the drumming of a cell on the graphene support before and after an­tibiotic administration as soundtrack, which they obtained by converting the interferometric traces to a sound track (57 Mb mp4 file, 31 seconds; download here.) You see in the animation that a cell is drumming with its whole body moved by the flagella, and not using the flagella as drumsticks (the flagella appear a little too short though.) This is different from Tony Allen, who plays drums with all four body extensions and with drumsticks. 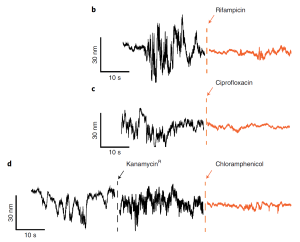 Rosłoń et al. provide a proof-of-principle and think it is pos­sible to use their graphene drum sensing platform for high‑throughput, label-free medical diagnostics. One fea­sible application would be for detecting antibiotic suscep­tibility in bacteria from clinical samples on the single-cell level in real time. But an application for fundamental re­search could also be envisaged; they say: "directed evolu­tion experiments may benefit from this technique as a fast se­lection and screening method, as the density of over 10,000 nanomotion sensors per mm2 can result in a greatly in­creased throughput as compared to 96-well plates or petri-dish culturing." Given, of course, the bugs in question sport flagella. I asked Cees Dekker, one of the co-authors, if it was possible to listen to Bacillus or Streptomyces spores drum­ming. Wouldn't it be neat to determine in this non-invasive way whether they are dormant or dead (see our TQ#195) ? "No," said Cees, "the drum assay is likely not yet sensitive enough for that. But perhaps we should listen in on the dormant bacteria to hear if we can make out their slow hibernating motion."