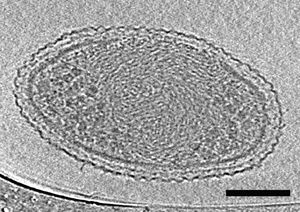 Figure 1. Cryo-ET image of an ultra-small bac­terial cell. The cell has a very dense interior com­partment and a complex cell wall. The dark­er spots at each end of the cell are most likely ribosomes. The image was obtained from a 3-D reconstruction. Scale bar: 100 nm. Credit: Ber­keley Lab. Source. Frontispiece: Detail from a My­co­plasma cell. By Martina Maritan. Source

Our ability to visual­ly per­ceive and dis­cri­mi­nate is al­ways sligh­ly over­whelmed by black-and-white ima­ges. Es­pe­cial­ly, of course, when the ob­jects de­pict­ed are out­side our train­ed, fa­mil­iar size spec­trum, such as bac­te­ri­al cells and their in­nards. Take for ex­ample Fi­gure 1, the cryo-ET image of a ti­ny bac­te­ri­al cell (Scale bar: 100 nm!) that I had shown here before. It doesn't take much practice and only a few cred­ible hints to "see" the cell wall, the ribosomes, and the very compact nucleoid. But that's about it.

Could you "see" a cell's innards in a color image better? Sadly, the cytoplasmic cell compo­nents are not inherently colorful, that is, they mostly do not absorb light in the vi­sible spec­trum (which would not be of much use in electron microscopy anyway). Biology textbooks usually get around this problem by resorting to colored schematic diagrams, here's the Wikipedia version. But David Goodsell from The Scripps Research Institute, La Jolla CA has gone a different way: drawing and coloring a cell with all its macromolecular components from scratch. 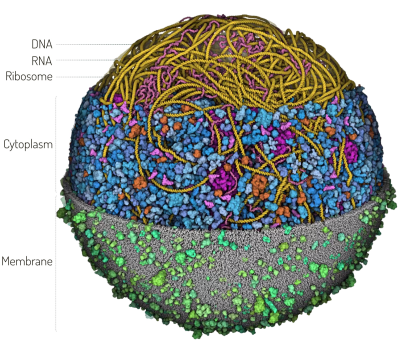 Already in 1999, for his first version of an E. coli cell, a part of it, he made three important deci­sions: 1. individual clas­ses of macromolecules get their own, easily recognizable color; 2. all macromolecules are shown in their relative si­zes/shapes, and allowing for their rotation in space and including their interactions, for ex­ample, ribosomes with tRNA and mRNA; 3. all macromolecules are shown in their approxi­mate cellular concentrations. The third point in par­ticular gives you a vivid impression of what cell biologists call "macromolecular crowding". But keep in mind that water molecules and ions ─ the broth of the cytoplasmic soup ─ are still 2−3 orders of magnitude smaller, and in­tentionally not shown to prevent any halluci­nogenic effects.

Concerning the colors, I always had the impression that David was inspired for his specific palette by the animated movie Yellow Submarine by The Beatles (he didn't confirm it yet). Concerning the sizes and shapes of the depicted macromolecules, he now relies mostly on the structural data de­posited in the Protein Data Bank (PDB); see the now even more detailed E. coli cell in the 2021 ver­sion. PDB is such a useful "public library" that not only can David borrow the "books" he needs there, but also electron microscopists borrow "books" there as templates for detecting and "color­ing" structures in their cryo-tomograms (see Figure 3 in this STC post.) 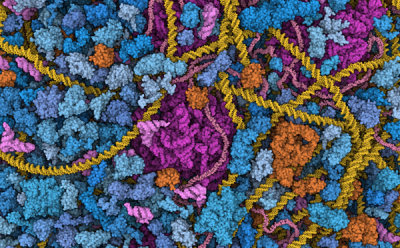 Now, David and his team have gone one step further by Building Structural Models of a Whole Mycoplasma Cell. Figure 2 is a screenshot from their movie worth watching repeatedly, and Maritan et al. (2022) say on the dedicated website:"This snapshot represents a Mycoplasma cell at the beginning of its life cycle. Cell shape has been approximat­ed to a sphere with a ra­dius of ~145 nm. Each protein is re­presented by a 3D structure coming from either homology modeling, a previous model of mycoplasma cytoplasm, ex­perimental data, or homologues from the Protein Data Bank. The nucleoid structure was modeled with LatticeNuc­leoid [soft­ware]. Small molecules, ions, and water are not shown in the illustrations, and would fill the spaces be­tween the macromolecules. Different clipping planes and coloring schemes have been applied to the model to highlight specific areas/elements of the cell." Teachers among our readers may want to study the computational route for obtaining this cell model in more detail here. I wish that this model of a prokaryotic cell will soon replace all these, well, nonsen­sical diagrams in textbooks and perhaps work against the widespread opinion that bacterial cells are "simple".

Another piece of work from David Goodsells workshop, the Mycoplasma JCVI-syn3A minimal cell in the process of division, was recently featured in The New Yorker, with the title A Journey to the Center of Our Cells. A warmly recommended reading, but don't take the "our" in the title too liter­ally. Bacterial cells are not insignificantly different from eukaryotic cells like ours (which should have gotten around to The New Yorker by now).