« A Revisionist History of Science | Main | How to Be a Lichen »

...and Many Images of Microbiology

Christoph: We rarely have editorial dissents at STC. In fact, I do not recall a single one in recent years. But, know­ing that Roberto detests flattery, I didn't want to risk one and asked George O'Toole directly for per­mission to re-print his recent editorial in the Journal of Bacteriology (omitting just two words of the original title). Thanks for granting permission, George and Deborah Plavin from ASM!

by George A. O'Toole

Roberto Kolter, after over 20 years of service, has decided to step away as the cover editor at the Journal of Bacteriology (JB), and I want to take this opportunity to both thank him and to reflect. When Roberto started as cover editor, the front of JB had evolved from shades of light blue to green. I was a postdoc in his lab at the time when Roberto was serving as a JB editor. He often ex­pressed his desire to move to a cover image for JB, and after several years of lobbying ASM, they said yes and handed him the reins in what turned out to be a long and successful run! 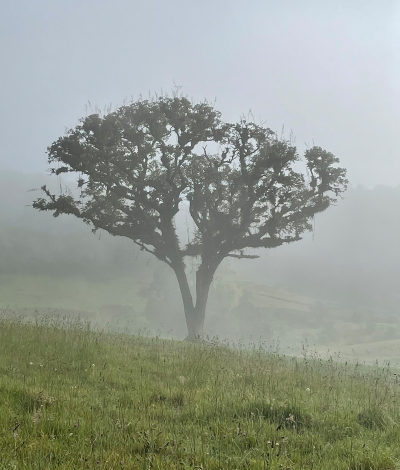 Why is Roberto stepping away? First, he has been doing this job since 1999 (frontispiece). For context, I have people in my lab that were born after 1999 (sorry Roberto), and by my count Roberto has selected something like 550 covers during this period time! If you know Roberto, you know that he did not just grab any old figure. He thought about the covers, worked with authors to tweak them, and ad­ded his artistic touch. As another bit of context, at the time Roberto started this role, the cover image was printed out at Harvard Medical School and mailed to ASM headquar­ters. Se­cond, what used to be a cover on an actual pa­per journal is now a thumbnail "fea­tured im­age," about the size of a stamp. There is a fair amount of work involved, and tight timelines; a fair amount of effort for what is now a rather small image. Now, don’t get me wrong, I love a cover/featured image, as you'll see if you visit my office at Dartmouth, but I can also under­stand that the return on time invested is not what it used to be.

As you might expect, while Roberto is no longer running a lab, he is quite busy, writing books, working on the Small Things Considered blog, giving (fantastic) lectures, running meetings, and contributing to science in ways large and small. However, I, for one, will miss the cover images in JB that Roberto selected for >500 issues. Finally, I am grateful to say that Roberto has been kind enough to contribute one last featured image, and as the legend attests, his selection of cover / featured images is always and ever thoughtful.

Here now is Roberto’s final featured image. He writes, "The tree represents what to me is the key development in microbiology (biology) of recent decades. When I took this photograph, I was not even thinking phylogenetics. It's just a beautiful centenarian tree that I walk by often when I hike in the mountains here in Colombia. Then I realized it has two early diverging branches (bacteria and archaea). And then, there is this branch crossing over, a bacterium entering an archaeon, starting the eukaryal branch from within the archaea. It is both Woese's tree and Doolittle's bush, recon­ciled." 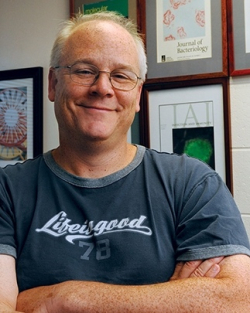 George O'Toole is Professor in the Department of Microbiology & Im­muno­l­ogy in the Geisel School of Medicine at Dartmouth in Hanover, NH. He serves as Editor in Chief of the Journal of Bacterio­lo­gy.