I always find it gratifying to find inspiration for my microbial writings from unexpected sources. Most recently my reward came while watching the movie Summerland, a thoroughly engaging film starring Gemma Arterton. The main character, Alice Lamb, lives in a cottage by the sea in Kent County, England, in 1940. The shore in this region is characterized by stunning white cliffs (see frontispiece) made of microscopic shells, coccoliths, the remains of unicellular algae that flour­ished and died over millions of years (a topic covered numerous times in STC, for example here). That alone would be enough to thrill any microbiologist. There was a second connection to mi­crobiology that I wasn't expecting. When Alice befriends Vera, another crucial character, Vera asks:

"Alice, as in Wonderland?"
"No, after Alice Evans, microbiologist." 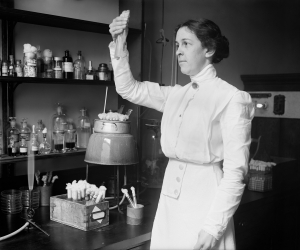 This provided the perfect opportunity to dive into the life of this noted microbiologist. Alice Evans (1881–1975) made some of most important contributions to microbiology in the early 20th century. In 1917 she presented her work showing that a bacterium found in raw milk – Bacillus abor­tus, now Brucella abortus – and the bacterium known to cause undulant fever in humans – Micrococcus melitensis, now Brucella melitensis – were virtually identical, suggesting that consuming raw milk could cause disease in humans. This result was met with skepticism by scientists and clini­cians, partly due to the prevalent views towards women scientists at the time. However, within a few years her re­sults were confirmed and in 1928 Alice Evans was elected as the first woman president of the American Society of Bacteriologists, now the ASM. She then went on to lobby for policy that required milk pasteurization in the US. In recognition of her many con­tributions, ASM's Committee on the Status of Women in Microbiology established the Alice Evans Award for the Advancement of Women in Science in 1983. I direct you to an excellent essay by Rita Colwell (the 1988 recipient of this award) describing Evans' numerous lifetime achievements and uphill battles.

Just like in Summerland, this summer ASM also has its own star named Gemma: Gemma Reguera is the recipient of this year's Alice Evans Award. To my friend and colleague, once a co-blogger in STC and a former postdoc in my lab: Gemma, I offer you my most sincere congratulations!