How to Be a Lichen 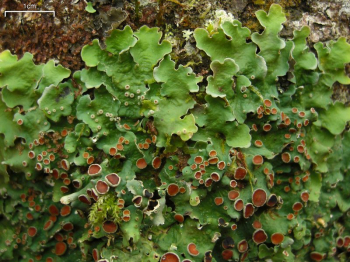 Lobaria quercizans is an indicator of older growth forests and very clean air here in the Southern Appalachians. They fix nitrogen, one of the limiting nutrients in older forests, and are cyanolichens because their photobioints (the symbionts that photosynthesize sugars) are both green algae (Plant Kingdom) and cyanobacteria (Monera Kingdom). With the fungus (Fungal King­dom), for whom the lichen is named, that's three king­doms in one individual! Photo by Jason Hol­linger

We are grateful for the kindly granted permission to re·blog a post by Nastassja Noell – with beautiful images of lichens by Jason Hollinger – that was first published in the blog section of The Firefly Gathering.

How can we live in balance with our ecosystems and each other? How do we meet our needs with­out de­pleting Earth and exploiting each other? Earthskills. Learning the names and gifts of the be­ings around us. Earthskills. Creating with our hands in gratitude. Earthskills... and some dharma style biomimicry.

Lichens are symbiotic organisms – algae, fungi, cya­nobacteria, bacteria and yeasts – that form miniature ecosystems that you can hold in the palm of your hand. They live on trees and rocks throughout the Southern Appalachians, and are also found in the Arctic, the Antarctic, rainforests, alpine tundra and especially in the desert. 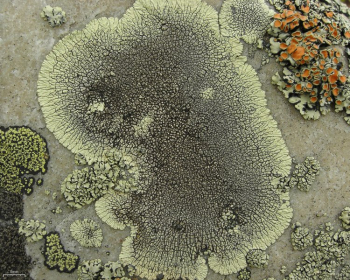 Dimelaena oriena (Moonbeam lichen) found on granite domes in Panthertown Valley, North Ca­ro­lina and throughout the Sierra Necada moun­tains in California. This is one of the few species the Appalachians shares with the High Sierras. Photo by Jason Hollinger

Why are we talking about lichens in a blog post for The Firefly Gathering? Because lichens are guides in ways that are common to many of our beloved teach­ers. The Firefly Gathering focuses on sharing skills that empower and inspire us to live with Earth as symbionts with our biosphere and each other – to follow the ways of mutualistic symbionts, and bring awareness to where we might be assuming parasitic ones.

Parasitism happens in lots of symbiotic relationships, but it doesn’t usually last forever. In a mycorrhizal relationship, a fungus forms a symbiotic relationship with the roots of a plant. Sometimes a fungus will start taking too much sugar from the tree and not give enough nutrients in return. Trees have been found to respond by reducing what they give back until the fungus comes into reciprocity again. Can you think of a relationship that felt this way?

How can we live in balance with our ecosystems and each other? How do we meet our needs without depleting Earth and asking too much of the people in our life? Lessons abound all around us, if we seek to listen and learn. Here are six lessons I have learned from our neighbor the lichen. 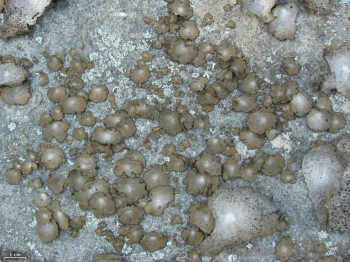 Lasalia papulosa (Common Toad Skin Lichen) grows on exposed sunny rocks in the Southern Appalachians. Rocks are some of the most intense habitats to live on due to limited water availability and lack of a porous surface to grip onto, but rocks are also the most stable. Many rock loving lichens (saxicolous lichens) are hundreds of years old, some are thousands of years old. Walk carefully little feet. Photo by Jason Hollinger

1 Always be present  Unlike their mushroom breth­ren – who disappear under the ground for long per­iods of time and only emerge to fruit in ideal condi­tions – lichens are always present. They live on the surfaces of twigs, stones, and soil; in winter, summer, drought, or monsoon. Like a lichen in a storm, you can weather what comes at you in life. In challenging moments and joyous ones, bear witness to the emo­tions moving through you. This is an important step for healing our eco-cultural wounds and for growing into our best selves.

2 Engage in subtle change  Lichens are emergent properties, meaning that they are more than the sum of their parts. Together, they create a dynamic sys­tem, doing things no partner could do alone. Forest ecosystems are emergent properties, as is your con­sciousness and our communities and families. We're constantly forming new emergent beings when we’re in relationship with others. How we choose to engage with each other shifts the shape and texture and feeling of these emergent beings. It's a lot of responsibility. And yet, it’s the most subtle move­ments that create change. There lies the power. By subtly changing the way you interact with the world and all your relations, the emergent properties you are a part of change in fundamental ways. Its a simple and fundamental as asking "who" a plant is instead of "what" a plant is. (Emer­gent Strategy by Adrienne Marie Brown is a great resource for more on emergence and social justice work). 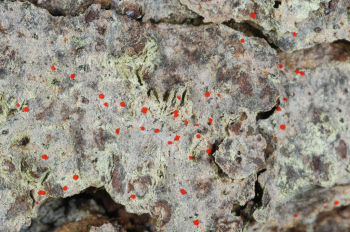 Coniarthonia kermesina, Hot Dots is their com­mon name, and this is a globally endangered species from the Southern Appalachians. They grow on mature red spruce boles up at the highest elevations. Since climate change is push­ing our high elevation forests further uphill, there's only a few places left on the world for this species, and those places are not far from where the Firefly Gathering takes place each year. Photo by Jason Hollinger

3 Celebrate differences  The entities in the lichen symbiosis are found throughout the tree of life, in numerous kingdoms and with both autotrophs and heterotrophs. You don't get many more variations in lifestyle than that! Despite vast differences, the part­ners of a lichen symbiosis go beyond them, merging their differences together in ways that enable them to thrive in ex­treme conditions that most other forms of life cannot bear – deserts, alpine, Antarctic, tops of trees, seaside rocks and can even survive the ex­treme radiation and vacuum pressure of outer space. Just like how our right and left brain perform unique functions and contribute unique strengths, what if we were to merge our dualities together and see how our differences can collaborate towards a better outcome for everyone: nature and economy, mascu­line and feminine, imagination and reason, progress and regression, rage and silence. Gems of emergence are often found in collaboration between dualities. 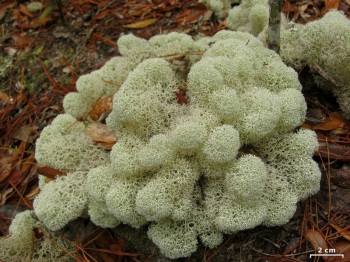 Cladina evansii, one of the reindeer lichens typically found in the Mid-Atlantic Coastal Plain where the oceans once covered the Eastern Carolina and much of the southeastern U.S., leaving giant sand dunes behind. Lichens don't have roots to dig into these sand dunes for water and security like their plant brethren do, but these lichens have each other to hold onto. Photo by Jason Hollinger

4 You are place  "Lichens are place," is a saying that lichenologist Trevor Goward explores in his series of essays, Ways of Enlichenment: Twelve Readings on the Lichen Thallus. Lichens have no roots to reach out and acquire nutrients. Their bodies crystallize from the air, rain, sunlight and the substrate they grow on. So, the lichen species of each place reflect the conditions of that place. An ancient forest has different lichen species than a 100 year old forest, while an urban area hosts a limited number of pol­lution tolerant species. We humans are not so dif­ferent. We are also influenced by the environments we live in, grow up in, and spend time in. Our bodies extend beyond our arms and legs and head and feet. We are the spaces we sit in, walk in, drive in. We are shaped by the tools we use, foods we eat, water we drink, air we breathe. Our bodies are place. Embrac­ing this means caring for the places around us and connected to us as we care for ourselves. 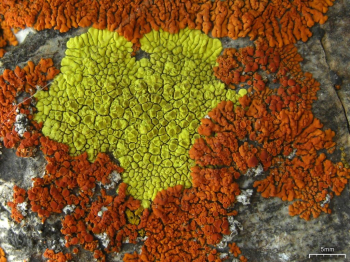 Caloplaca trachyphylla and Pleopsidium flavum. These lovely lichens are found throughout the Great Basin desert. They love bright sunny places, and they love siliceaous rocks so much that they have no undersurface. Like many crustose lichens, they grow slow and steadily, usually less than 2 mm a year. Photo by Jason Hollinger

5 Grow slowly  Lichens grow an average of 2 mm a year. Some grow a bit faster. That's why most herba­lists collect only windfallen lichens for making medi­cine. Your palm can hold decades of growth by a li­chen that weighs less than a paperclip. Slow growth may be contrary to our hyper-extractive capitalist system that we're all caught in. However, perhaps slow growth, thoughtful growth, intentional growth, is exactly what we need to grow strong and resilient.

6 Rest  When lichens go into a dormant state, they don't enter entropy or decay and they don't die. They simply go into an intentional pause where all bionts (symbiotic partners) are supported. In deserts, li­chens sometimes go dormant for years; one raindrop might be all they need until the next rainy season. The big question is, if we're not producing and grow­ing as a society, what are we doing? Can we imagine spending more time enjoying each other and ourselves, being present for the mysteries of life unfolding, using only the minimum we need to thrive, sharing resources, skills, land, and seeds? What kinds of songs and stories and imaginative play might we co-create if we shifted out of productive growth-oriented mode into something slower, less extractive, more contemplative?

Every single one of us contributes to these emergent properties called humanity, called society, called The Firefly Gathering. As we grow beyond the mentalities of taking and into the reciprocity of giving and receiving, we learn to be lichens again. We enter into a mutualistic symbiosis with the more than human world, with each other, with the biosphere, with life. 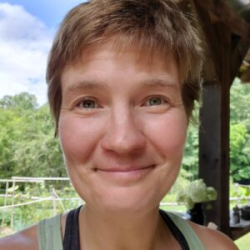 Nastassja Noell is a lichenologist and the Registrations and Communica­tions coordinator for Firefly Gather­ing, you can read more of her work at beinglichen.org. Her partner, Jason Hollinger, is also a licheno­logist and photographer, currently working on photos for a series of lichen field guides by Princeton Univer­sity Press.