A Message to the Attendees

With kind permission by the organizers, we reproduce here Elio's message to the attendees of the meeting on 'Major ideas in quantitative microbial physiology: Past, Present and Future' held in June this year in Køben­havn, Denmark.

The future of bacterial growth physiology appears to be as bright as ever. It benefits, among other things, from the increased ability to study bacteria in nature, from advanced techniques in optical and electron microscopy, and from the heightened use of computational analysis. Bacterial phy­sio­logy is being comingled with systems biology (a term that is perhaps losing some of its luster). 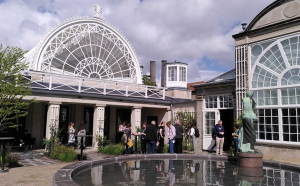 We are learning more and more about the interactions in living cells between and among micro- and macro-mole­cules, the goings-on during the cell cycle, the stochasticity of previously thought to be homogeneous populations, and other such enticing phenomena. In recent years, there has been a most welcome re-entry of physicists to biology. They bring along novel ways of thinking as well as advanced tech­nologies and yen for model making.

But old basic questions remain. Why do bacteria (E. coli at least) have so many overlapping regulatory mechanisms? What are the rules that govern that? How is it possible that, unlike what happens in eukaryotic cells, in bacteria the major macromole­cular factories can, to a limited extent, operate in isolation for one another? In the broadest terms, questions related to ecology and evolution appear to be ceaseless. I am sure that were I to attend the meeting, I would find that the number of topics that deserve attention has multiplied signifi­cantly. And so the excitement in this field continues unabated.