Turns out that E. coli are also capable of "transport perfor­mances," even more so. Unlike B. subtilis, they can trans­port not just comparatively small and lightweight Strepto­myces spores ─ that attach to B. subtilis flagella like thistle burs thanks to their chaplin/rodlin-spiked surface ─ but can tow lipid vesicles up to a hundred times larger than them­selves (by volume). Heavy-duty transport, so to say. Accord­ing to a recent study (preprint) by Lucas Le Nagard and col­laborators from Wilson C.K. Poon's lab at the School of Phy­sics and Astronomy, The University of Edinburgh UK, motile E. coli cells extrude membrane tubes from unilamellar lipid vesicles (GUVs) in which they are confined. Flagellar move­ment of the bacteria then set the GUVs in motion. In the ani­mated Figure 1 you see that such motion is due to a tight physical coupling between the fla­gellar bundles of the enclosed cells and the thin membrane tube; the GUV from which this nano­tube extends here is not visible in the upper right, but it is in Figure 3.

For their experiments, the researchers used a Δ(cheY::kan) derivative of a classical lab strain, E. coli AB1157. These Δ(cheY::kan) mutants are so-called 'smooth swimmers' because the molecular switch between forward‑swimming (counter‑clockwise flagella rotation) and tumbling (clockwise rotation) is disabled, and their swimming speed is approximately constant for a given physiological setting during balanced growth. For better fluorescence-microscopic tracking of single cells, the Δ(cheY::kan) strain was transformed with plasmid pWR21, which expresses eGFP constitutively. 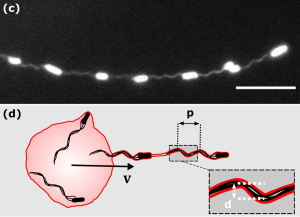 Figure 2. Membrane tubes propel GUVs by tightly coupling with the flagella bundles of enclosed cells. (c) Fluores­cence image of a tube containing mul­tiple bacteria, showing the coupling with the flagella bundles behind each cell. (d) Schematic of the system (not to scale) describing the mechanism of GUV pro­pulsion. The membrane (red contour) of the tube wraps the bacteria and adopts the shape of their helical flagella (pitch p, helical diameter d). Flagellar rotation with­in the tube generates a thrust force and results in an instantaneous velocity vector v parallel to the tube. Bars: 10 μm. Source

For microscopy, they embedded actively growing bacteria in GUVs by the established inverted-emulsion method. Brief­ly, the bacterial culture was centrifuged through POPC lipids spiked with fluorescent dye to obtain tiny droplets covered with one lipid layer. In a se­cond centrifugation step, the out­er lipid layer was added to obtain unilamellar GUVs that con­­tained the bacteria in growth medium and which floated in (bacteria free) growth medium. (Apart from their detailed description in the "Materials and Methods" section of their paper, further delicate technical details are found in these instructions.) For microscopy, they let the GUVs settle to­wards the bottom of sample chambers, which had been pre‑treated with bovine serum albumin to minimize vesicle adhesion.

To maintain the desired osmolarity and viscosity, the inter­nal medium (LB) was supplemented with (non‑metaboliz­able) sucrose, as was the external medium, a glucose so­lution (both sucrose and glucose do not diffuse across the lipid membrane). They readily observed bacteria propelling within "their" vesicles, mostly in circular paths along the membrane boundary. Only when they came up with the idea to "deflate" the GUVs, bacteria started to extrude membrane material as nanotubes (Figure 2d). How this? Water diffusing out of the vesicles leaves their membrane with less internal tension, so that the bacteria can extrude na­notubes ─ until the membrane material spent in extending nanotubes leads again to (almost) per­fectly sphere-shaped vesicles, as can be seen in Figure 3. How did they achieve this controlled "de­flating"? You will laugh at how easy it is, it's not rocket science: they let water evaporate(!) from their GUV-containing sample chambers by leaving them uncovered for a short time.

Occasionally, they could capture the rapid process of the initiation of tubular protuberances by swimming bacteria, which takes approximately 1 s and requires a cell to swim perpendicular to the membrane (Figure 2d). More cells ─ they found up to ~10 ─ can enter an already formed na­notube, causing its extension. All cells plus their flagellar bundles align head-to-tail and are re­gu­larly spaced in "their" tube (Figure 2c). Theoretical considerations/calculations support their notion that as long as the membrane tube is thin enough to be perturbed by the enclosed rotating fla­gel­lar bundle, it adopts its helical shape and functions as an 'effective flagellum' generating propul­sion for the whole vesicle.

They never observed a bacterium swimming into a pre‑existing cell‑free nanotube. Also, they found no bacteria‑containing tubes with encapsulated dead cells, and bacteria eventually swim­ming outside vesicles did not pull‑off membrane tubes (you see a few buzzing around in Figure 3). When you look closer at Figure 2c you can observe that the cells were doing splendidly under the experimental conditions: one cell has just divided, and at least one other is just about to. The na­notubes are apparently flexible enough to accommodate two cells lying side‑by‑side. I would love to see whether the daughter cell re‑orients to maintain the head‑to‑tail configuration, or, maybe, changes the position of its flagellar bundle from the old to the new pole.

The researchers observed that motile E. coli in nanotubes were able to propel GUVs at speeds of 1 μms─1, and the speed of the "trucks" was largely proportional to the number of cells in a nano­tube. The motion was always tube-first with velocity vector parallel to the tube. GUVs containing bacteria but lacking protrusions remained static, suggesting that motile bacteria in the vesicle lu­men do not contribute to vesicle propulsion.

Le Nagard et al. (2022) also tried to employ B. subtilis for tow­ing liposomes but failed. This, for one, because they had no "smooth swimmer" strain available and their flagellated B. subtilis cells were happily moving in their normal, messy run‑and‑tumble mode within GUVs but could not propel them. ("Copying" the E. coli ΔcheY mutation into B. subtilis is not sensible because the homologous CheY proteins of both species exhibit remarkably different regulation.) Also, B. subtilis propels itself using several flagellar bundles, which might interfere with the formation of stable mem­brane tubes (because everything gets tangled up). They conclude:"there is no generic behaviour of swimmers en­capsulated in vesicles. Even two bacterial species swimming using flagella bundles produce different effects."

A particularly intriguing finding of their work is that the nanotube‑flagella composite functions as a helical propeller (for the entire vesicle). They mention that this could lead to a better understand­ing of the underlying physics of the only partially understood movement of sheath‑enveloped fla­gella of, for example, Vibrio alginolyticus ─ or, I'd like to add, the physics of the intriguing periplas­mic flagella of Borrelia (mentioned here in STC). 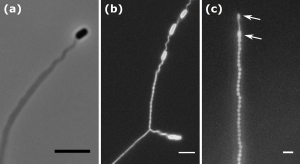 Figure 4. Thicker, split and pearled tubes. (a) Thicker tube coupling with the flagella bundle of an enclosed cell. (b) Tube split into two sub-tubes, one containing a single cell and the other one containing 4 bacteria (only 3 are visible). (c) Pearled tube with two bacteria at its end (white arrows). Bars: 5 μm. Source

Fair enough, Le Nagard et al. (2022) also report some rarer tube morphologies, which illustrate non-uniform behaviors spontaneously occurring in their system but are particular interesting for researchers who study cell growth resulting in split ends (Bifidobacterium, Streptomyces), or outer mem­brane vesicles (OMVs), nanotubes (E. coli, B. subtilis), and "biopearls" (here and here in STC). Bacteria did some­times generate thicker tubes (Figure 4a) and split tubes with dynamic junctions moving along the tube (Figure 4b). Pearl­ing instability could also be observed, especially in thicker tubes, behind the section wrapping the flagella (Figure 4b,c). This is interesting because in all these cases the membrane distortions were dependent solely on the membrane lipids and their malleability, and did not involve any outer mem­brane proteins as in the mentioned bacteria.

As much fun as it is to watch bacteria move loads, there are also practical implications, at least their possibility. It is easy to perceive that the transport of immobile Streptomyces spores by mo­tile bacilli is relevant in such microbial jungles as soil (macrobes included, of course). But also the "transport performance" of E. coli bacteria does not have to remain just a nice gimmick in the lab. Le Nagard et al. (2022) say:"Simple biohybrid systems made of living bacteria encapsulated in syn­thetic vesicles have been explored for their biotechnological potential in shielding and delivering probiotic bacteria and for biosensing. Our work adds the possibility of these delivery vehicles be­coming sel-propelled, which might enable more targeted delivery." If their prototype "E. coli truck" sustains cell division within the GUVs and the (tractor) bacteria remain motile for ~8 h, thanks to nutrients provided in the inner medium and/or endogenous metabolism enabled by the diffusion of dissolved O2 through the membrane, this is perhaps even easier and faster to achieve than de­signing self-driving trucks, who knows?

After publication, Lucas Le Nagard, first author of the featured preprint, pointed out to me that they hadn’t tried to repeat the experiment with B. subtilis but referred to earlier observtions by Takatori & Sahu (2020).

Christoph Weigel on July 18, 2022 at 01:30 AM in Methodology, Physiology & Genetics, Teachers Corner | Permalink