« Shepherding bacteria with specks of light | Main | Gram versus Derm » 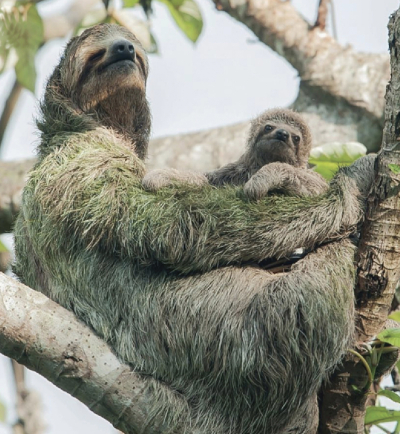 Last Monday's post described the "peculiar plumage pigment" of colorful birds like the scarlet macaw. Janie made the case that for animals, eye-catching colors generally serve to attract mates or detract potential predators. But, in the case of red parrot feathers the pigment has the added benefit of protecting the plumage from bacterial degradation. Today I stay on the topic of animal coloration by describing the "peculiar pelage pigment" of sloths. Exactly what constitutes an eye-catching color is, of course, in the eye of the beholder (pardon the pun). Take amphibians; green frogs are very much run-of-the-mill, remember Kermit's lament. But a mammal sporting green fur? That's something that catches my eye due to it unusualness. So, here's the story of the charismatic green sloths.

Sloths or perezosos (as they are known in Spanish, meaning "lazy ones") are striking mammals in many ways. As their name implies, they are extremely slow-moving. They spend much of their lives simply hanging out in the heights of trees of the tropical rain forests of Central and South Ame­rica. There are two genera of sloths which diverged some 40 million years ago: the two-toed sloths (Choloepus) and the three-toed sloths (Bradypus). Because their diet consists mostly of nutrient-poor leaves, they exhibit some of the lowest metabolic rates among mam­­mals. And then there is their green coloration, which is where microbes come in. The pigment responsible for the green color is chlorophyll; in the wild, sloth hair is colonized with microalgae. Even though they are arboreal mammals, the two types of sloths are ecologically and physio­logically quite distinct. Two-toed sloths have relatively large home ranges and supplement their leaf diet with fruits and small animals (mainly insects). In contrast, three-toed sloths have much smaller home ranges and are strict folivores. They are specialists that often live in and consume leaves from only a few spe­cies of trees. This nutritionally poor diet leads three-toed sloths to possess the slowest digestion and lowest metabolic rates among mammals.

The microalgae that colo­nize sloth fur also differ dramatically in the two types of sloths. A study using a sequenced-based approach found that, while two-toed sloth hair can be colo­nized with quite diverse species of microalgae, the three-toed sloth, Bradypus variegatus, is colonized with only very closely-related strains of the microalga Trichophilus. Interestingly, these strains of Tri­chophilus have not been found anywhere else, suggesting that they are host-adapted. This led the authors to suggest that the B. variegatus and its associated Tri­cho­philus have co-evolved!

This intimate and long-term association between sloth and alga suggests an adaptive function. But what role could this be? For a long time, sloth watchers have posited that the green col­oration provides camouflage that protects the slow-moving sloths from predation. This makes sense but there is no evidence supporting it. Not too long ago, a study provided some expe­rimental evidence consistent with an­other possible role for the alga, nutrition. How could this be? It's complex. The idea that the algae can be a nutrient arises from looking at the sloth ecosystem as a multipartite mutualistic symbiosis. Besides the algae, sloth fur contains a veritable zoo of organisms, including many different bac­teria with the potential to produce numerous bioactive na­tural products. The sloth is thus sometimes referred to as a model mobile ecosystem. The key additional players in the nutrition role of alga hypothesis are a moth (Cryptoses cho­loepi) and diverse detritivorous fungi.

The authors compared the fur ecosystem of two-toed and three-toed sloths in terms of moth biomass, organic nitro­gen content and algal biomass. For all three components, the more specialized three-toed B. variegatus carried great­er amounts (Fig. 2). They hypothesize that in the forest ca­nopy sunlight is not the factor limiting algal growth. Rather, they suggest that nitrogen becomes limiting. Having more moths means more dead moths that can be decom­posed by fungi and thus provide more nitrogen. The nitrogen can then be used by the algae to attain higher yields. Of course, to be nutritious, the sloth must then eat the algae. In sup­port of this, the authors found algal remains in the stomachs of some of their sampled sloths. 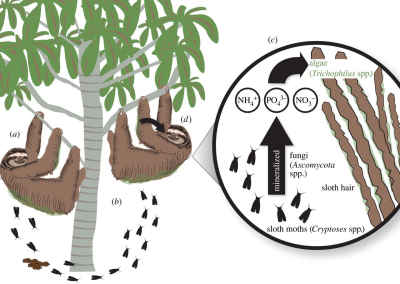 Figure 3. Postulated linked mutualisms (+) among sloths, moths and algae: (a) sloths descend their tree to defecate, and deliver gravid female sloth moths (+) to oviposition sites in their dung; (b) larval moths are coprophagous and as adults seek sloths in the canopy; (c) moths re­present portals for nutrients, and via de­composition and mineralization by detri­tivores increase inorganic nitrogen levels in sloth fur, which fuels algal (+) growth, and (d) sloths (+) then consume these algae-gardens, presumably to augment their limited diet. Source

A most interesting aspect of this hypothesis lies in the life cycle of the moth. Turns out the moth larvae are coprophagous, so gravid adult moths must deposit their eggs in fresh sloth dung! To ensure that the moths find the proper poop, the sloth engages in a most dangerous behavior putting itself at great risk of predation. Once a week, the lethargic three-toed sloth descends from the tree and defecates in the forest floor. Gravid moths take advantage of this moment and de­posit their eggs in the proper location. The eggs hatch there, larvae mature and eventually the young moths fly into the fur of their host. (It will be fascinating to deter­mine if sloth poop contains microbes that produce specialized metabolites that aid in egg hatching and larval maturation!)

The authors pull all these concepts into a model where the several mutualisms lead to a more nutritious diet for the sloth (Fig. 3). They argue that the benefit of having more algae to eat must be sufficient to justify the risky behavior of defecating in the forest floor. In contrast, the two-toed sloths whose diet includes fruits and insects, poop while hanging high in the canopy. Overall, I like this model as an attempt to explain the possible co-evolution of the three-toed sloth B. variegatus with its Trichophilus alga. But the model is not without its critics. Some suggest that the mo­del does not hold water because sloth predation is equally likely in the canopy. Others argue that, unlike cats and other mammals, sloths do not lick themselves and thus it is not likely that they consume the algae on their fur. Regard­less of what we'll eventually come to understand as the main role of algae on sloth fur, I find the complex inter­twining of lifestyles in this ecosystem amazing.

Figure 4. Three-toed sloth resting on a cable in an agro­ecosystem in Costa Rica, which was the inspiration for roboticists to develop the Slothbot, shown tra­versing an installed cable in the Atlanta Botanical Gardens. Source

Apparently, I am not the only one in awe of the unusual nature of the three-toed sloth. In doing my reading for this post I came across an article entitled "Robot Ecology: An Inspiration for Future Ecologists." The authors describe how the field of robotics is dominated by design that seeks to maximize accuracy, reproducibility, and speed. This makes sense for robots used in such activities as manufacturing and medicine. But in energy constrained environments, robot design that emphasizes survival and energy efficiency becomes key. So, robot design has taken lessons from the three-toed sloth. The authors claim that the SlothBot – not seren­dipitously painted green – "is the first manifestation of the survival concept in robotics and a new conceptualization of robot ecology." That the microalgae on its fur might provide the sloth with some energy, much like the solar panel does for SlothBot, I find fascinating.