A Dinoflagellate and its Mucosphere

There are strikingly different table manners among human cultures past and present when it comes to food ingestion, who wouldn't know. Not so with our single-celled eukaryotic relatives, the protists, who gobble up everything that feels and smells about right? Wrong. Engulfment, as biologists call this behavior is a bit like putting a bowl of ramen noodles to your lips and swal­low­ing it all in one go, gulp. For peduncular feeding, on the other hand, you would take a straw to slurp-up the soup. And that is exactly what many well-mannered dinoflagellates do. The photo­synthetic, phago-heterotroph dinoflagellate Prorocentrum cf. balticum, which is the subject of this post, also does it, and the "straws" they use are their own cellular appendices, microtubule-en­forced pseudopodia (Figure 1 e1+e2). 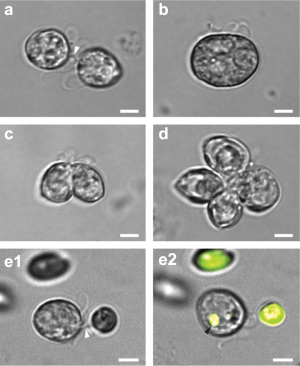 A brief detour before I come back to ramen noodles. Pro­rocentrum is capable of peduncular feeding and, apparent­ly, also of "peduncular mating" (not an accepted scientific term but suggestive). Michaela Larsson and her colleagues from the University of Technology (UTS), Sydney, Australia found in their recent study of several Prorocentrum cf. bal­ticum lineages mating pairs "connected" via a peduncle (Fi­gure 1 a). This was the first step towards complete sexual reproduction (Figure 1 b−d). The sexual life of dinoflagel­lates is far too complicated − and varies considerably from species to species − to summarize briefly and coherently but you can consult this figure here for a recapitulation of all steps in Prorocentrum. Important for what follows is that Larsson et al. reproduced all major life cycle stages of Pro­rocentrum including asexual and sexual reproduction dur­ing cultivation in the lab. That is anything but a given for protistologists.

A legit ramen dish consists of the noodles, broth, and top­pings. These are added sequentially to a ceramic bowl, and you're served it with chopsticks and spoon for handling. Prorocentrum has its peduncle, and thus can do without chopsticks. It actually crafts its own "bowl" for every meal! Larsson et al. found that hungry Prorocentrum cells start photosynthesizing when triggered with light and begin to secrete mucus after ~8 h. After individual Prorocentrum cells have completely coated themselves in mucus, their movement within this coat − all the while continuing with mucus synthesis − shapes a permeable sphere up to 100 µM in diameter (bowl!) filled with surrounding seawater (broth!). Larsson et al. termed these spheres "mucospheres" to make clear that they are distinct from membrane vesicles and proteinaceaous shells known from viruses or (bacterial) carboxysomes. 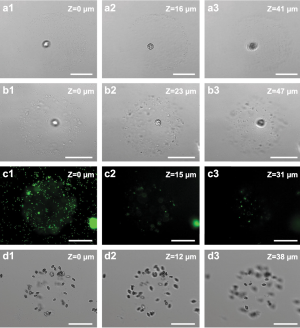 The chemical composition of the mucus produced by Pro­rocentrum is not precisely known but staining mucospheres with the acid polysaccharide stain Alcian Blue20 and the protein stain Coomassie Brilliant Blue21 suggests that their composition is analogous to transparent exopolymeric par­ticles (TEP), a chemically diverse group of particulate materi­al that consists mainly of carbon-rich acidic polysaccharides excreted by marine microbes. Energy production and car­bon fixation by photosynthesis are necessary for muco­sphe­­re formation. In one experiment, the number of cells producing mucospheres dropped by 50% under low-light conditions as compared to optimal light during the first day of cultivation and did not increase on day two, while muco­sphere production on day two continued under optimal light. Not surprisingly, phosphate availabilty also strongly influenced mucosphere formation.

Like in a spider web, prey (topping!) gets trapped in the mu­cus meshwork of the mucospheres. But unlike spider nets, the mucospheres seem to actively attract prey as the re­searchers found a 2−3-fold increase in chemotaxis of prey towards mucosphere extracts as compared to culture fil­trates. Larsson et al. fed axenic Prorocentrum with marine bacteria and/or unicellular Rhodomonas salina algae that all got efficiently trapped in the muco­spheres (Figure 2). They calculated that indiviual mucospheres snare on average ~50 prokaryotic and 10 small (10 μm diameter) spherical eukaryotic cells. After several hours, when they have finished crafting their mucospheres and when enough prey has accumulated, Proro­centrum spend on average between 5.3 and 14.4 h hours with feeding; this time span depends on nutrient and prey conditions.

Interestingly, among the bacteria trapped in mucospheres Larsson et al. found preferentially the "usual suspects," marine heterotrophs from the Gamma- and Alpha­pro­teo­bacteria, but no SAR11 bacteria (Pelagibacter) or picocyanobacteria (Prochlorococcus, Synechococcus). This was most likely because the "food cocktail" of marine bacteria fed to axenic Prorocentrum cells did not con­tain the latter bacteria or very few, as they are notoriously difficult to cultivate in the lab. 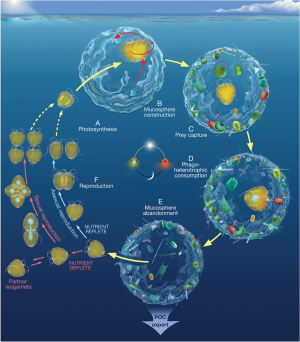 (Click for larger version)
Figure 3. Prorocentrum cf. bal­ticum be­haviours. Infographic show­ing the daily cycles of A photosynthesis, B muco­sphere production, C prokaryotic and eu­karyotic prey attraction and capture, D peduncular phago-heterotrophic feeding, E mucosphere abandonment and carbon export potential, and F asexual or sexual reproduction. The solid yellow arrows re­present the daily cycle of the P. cf. balti­cum cell including entering the muco­sphere during construction in B and exit­ing the mucosphere in E. The light blue arrows show P. cf. balticum cells through the asexual re­­pro­duction stage and the pink arrows represent the sexual re­pro­duction stage. The broken yellow ar­rows signify one of the succeeding P. cf. bal­ti­cum cells from either of the reproduction stages re-entering the daily cycle. Source

I paraphrase the authors' description of Prorocentrum's diurnal cycle, its daily routine, as it is shown as diagram in Figure 3: it photosynthesizes in the early stages of the light cycle (A) and converts fixed carbon into an apparatus that aids prey capture by exuding, then spinning and shaping mucus into a mucosphere (B). The fully formed mucosphere attracts and captures both prokaryotic and eukaryotic cells (C) that Prorocentrum selectively consumes via peduncular myzocytosis (D). Once satiated − typically in the evening − it abandons the mucosphere laden with "left­over" prey cells, which then contributes to the downward flux of POC (=par­ticulate organic carbon) from the surface ocean (E). The un­burdened cell is then free to divide asexually in preparation for the next daily cycle, or, under prolonged nutrient limita­tion, perform sexual reproduction (F).

It is clear from the observations of Larsson et al. that Proro­centrum leaves its slowly downward-sinking mucosphere when it has eaten its fill (no, not the picture of the ramen dish here again). It is not known how Proro­cent­rum snakes its way through the self-made mucus meshwork without tearing it apart. Anyway, the sinking mucosphere forms part of what has been termed "marine snow" (see also here in STC).

But the whole story cannot − or should not − be filed under "neat, entertaining trivia." Prorocentrum cf. balticum 18S rRNA sequences were found by the Tara Oceans project in virtually all samples from polar and tropical regions worldwide. Found in comparably low numbers (<5%), but consistently across ~100 sampling points. Larsson et al. calculate that the mucospheres produced by Prorocentrum cf. balticum contribute an estimated 0.17–1.24 mg·m−2 ·d−1 of particul­ate organic carbon, or 0.02–0.15 Gt to the biological pump annually, which represents 0.1–0.7% of the estimated total (downward) export from the euphotic zone. This demonstrates, according to the authors, how the complex foraging behavior of a single species of mixotrophic protists can dis­proportionally contribute to the vertical flux of carbon in the ocean.

(A guide to eat ramen noodles properly, that is, the Japanese way, can be found here).