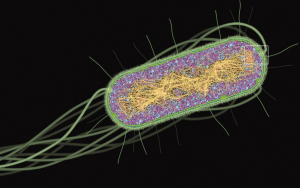 Cross section through an entire Esche­richia coli cell. The cell wall is in green, the cytoplasm is in magenta and blue, and the nucleoid is in yellow and orange. The boxed region is enlarged here. Art­work by David S. Goodsell. Source

There is little doubt that Escherichia coli is a favorite of ours here at STC. E. coli fans from around the world seem to get a special thrill when we post any new development arising from studies on this astonishing model bacterium. We are so taken by it that our coverage has gone beyond describ­ing research. Previously on STC... In 2016, Mehmet Berkmen and Paul Riggs related their research into the history of how E. coli strain K-12 got its name. And a little less than a year ago, I described some of the events that helped E. coli rise to prominence.* Now, E. coli aficionados around the world rejoice! As part of what is going to be an outstanding col­lection of JB articles on model microbes, Natividad Ruiz and Thomas Silhavy contributed an authoritative treatise en­ti­tled "How Escherichia coli Became the Flagship Bacterium of Molecular Biology" (not OpenAccess yet). For those of you deeply steeped in the historical events that surround the rise of E. coli, this reading likely will bring some tears to your eyes. And for you E. coli newbies among our readers, this is a wonderful text to acquaint yourselves with the amazing history of our beloved bacterium.

*Thanks to Guy Plunket III for pointing out this additional STC post on the history of E. coli: Brooke Anderson's Standing on the Shoulders of a Tiny Giant.