DGGE, to keep the title short, stands for denaturing gradient gel electrophoresis. You may wonder what an electrophoresis technique is doing in our 'of Terms in Biology' sec­tion, but it was once a nifty way to explore microbial diversity in envi­ronmental sam­ples. And sometimes it still is, which struck me again when I came across one of the most beautiful electrophoresis gels I have ever seen (Figure 2).

Figure 1. Close-up video still of Guaymas Basin sediment surface with orange Beg­giatoaceae mats, obtained with the down facing Alvin camera during dive 4872 (De­cember 24, 2016). The contrasting insert shows the surface of sediment core 48­68-7 in the lab after gradual thawing, and pipetting-off supernatant. Insert and vi­deo still image were adjusted to appro­ximately the same scale based on indi­vidual orange Beggiatoaceae fila­ments with diameters of ca. 30–40 μm. Fronti­spiece: detail from Fig. 1. Source

DGGE was developed by Leonard Lerman in the late 1970s, and in 1993 adopted for mi­cro­bial popula­tion profiling by Gerard Muy­zer. His technique is based on electro­phoresis of PCR-amplified 16S rDNA frag­ments (from the variable V3 region) in polyacrylamide gels containing a linear gradient of denaturants (urea, formalde­hyde). For the younger of our readers: in the early 90s, PCR-amplification of rDNA sequences from environmental samples was just about becoming state-of-the-art, while next generation sequenc­ing (NGS) as a routine technique was still some years away.

In DGGE, DNA fragments of the same length but with dif­ferent base-pair sequen­ces are separated due to differ­ences in mobility of the partially melted DNA mo­lecules, all with their distinct individual melting points, and which is decreased compared with that of their completely double-stranded form. The technique is comparatively simple, theoretically, but requires extremely pre­cisely constructed electropho­resis chambers, and, for reproducible results, meticulous adherence to detailed instructions for gel preparation and gradient mixing (or depends, in the sister techni­que TGGE, on a carefully controlled temperature gradient for DNA melting). Nothing for the faint‑hearted experimentalist! 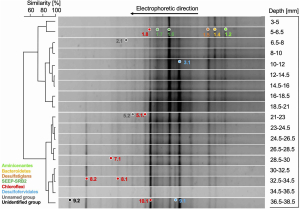 (Click to enlarge)
Figure 2. DGGE analysis of bacterial 16S rRNA genes from sediment core 4868-7, with similarity clustering pattern and po­sitions of excised and sequenced DGGE bands, color-coded to match their phy­logeny. The DGGE lanes of the deepest PCR-positive sediment samples, 38–40 and 40–42 mm, showed the same pat­tern as the 36–38 mm layer, but the bands were faint and the DGGE lanes are not shown. Source

With their recent study, Engelen et al. aimed at a better un­derstanding of the complex stratified microbial com­munity composition in the uppermost layer of the hydrothermal sediments of Guaymas Basin (27°00.40'N/111°24.57'W) where oxidative and reductive nitrogen, sulfur, and carbon-cycling populations and processes overlap and coexist. Se­diment cores were sampled in 2016 during Alvin (DSV-2) dive 4868 at a depth of 2,003 m and frozen at ─80°C after removal of the surface Beggiatoa mats (Fi­gure 1). Thermal gradient measure­ments showed that in situ temperatures at the sampling site, starting at bottom water temperature of 3°C right above the sedi­ment surface, reached 60°C at 10 cm, and increased rapidly with depth to over 100°C.

They chose core 4868-7 for DGGE analysis and, after gra­dually thawing it at room temperature, siphoned‑off the first 3 mm below the surface, which mostly con­tained porewater that had frozen out of the core and diluted the sediment. They cut the 'trimmed' core into ~2 mm slices down to 4 cm. Measured DNA concen­tra­tions in the upper 2 cm were in the range of ~10 µg/g and dropped sharply there­after to <2 µg/g wet weight. Prior to DGGE, they performed PCR for the individual fractions aiming at ~500 bp products with 16S rDNA specific primers (from the variable V3 region); an important control was that they checked their PCR pro­ducts by gel electrophoresis to ensure that the primer combina­tion generated a single band of appropriate length!

By DGGE, they found up to 20 clearly distinguishable bands in all gel lanes, whose intensities showed a fine‑graded distribution across the entire depth gradient (Figure 2). They excised the bands, re‑amplified them individually by PCR, and sequenced them. Figure 3 shows the assign­ment of their samples to bacterial groups, six known for their phylogeny and two unknown ones; all-in-all no big surprises, their samples contained 16S rDNA sequences that were already known from other deep-sea samples. The known ones included, at the genus/family le­vel, free‑living and syntrophic deltaproteobacterial sulfate-reducing bacteria, fer­mentative Cytophagales, members of the Chloroflexi (Thermoflexia), and Amini­cenantes.

Here's why this gel in Figure 2 struck me as "beautiful." First, I prefer to see ─ when I can assess the signal-to-noise ratio at a glance as here ─ physical evidence of differences in DNA sequences rather than algo­rith­mically calculated ones. (Call it a whim or "applied aesthetics," but it's certainly not that kind of quantitative biology we microbiologists are educated to do.) Second, all lanes except the pen­ultimate (from the bottom) appear as if they had been electrophoresed ─ in the lab we say "run" ─ on one single denaturing gel. That was not the case. You see not only from the white "spacer" between the lanes in the layout of the com­po­site picture that all lanes were run separately (and separately stained and photo­graphed afterwards). You see this also from the ever-so-slight lateral displace­ment of corresponding bands in the individual lanes, barely perceptible and only visible when zooming in. The degree of reprodu­cibility achieved here is master­ful, and when someone masters a tricky experimental technique, the results are oc­casionally, well... beauti­ful. 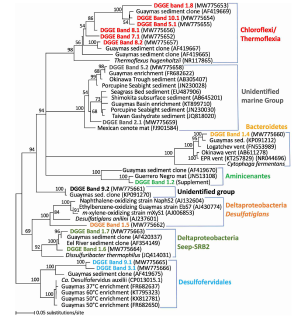 (Click to enlarge)
Figure 3. Distance phylogeny of bacterial 16S rRNA gene DGGE fragments based on complete amplicon length minus pri­mer sequences, color-coded to match the DGGE bands in Fig. 2. The sequence of DGGE band 1.2 is provided in Supple­mentary Table 2. Bootstrap support for nodes (in%) was derived from 1000 iterations. The scale bar in this and sub­sequent phylogenies shows sequence distance (Minimum Evolution) as speci­fied in Materials and Methods. Source

You may wonder why Engelen et al. didn't find Archaea in their survey of prokaryotic diversity by 16S rDNA PCR of core 4868-7. They state:"DGGE analyses of archaeal 16S rDNA gene fragments were attempted repeatedly, but did not result in clearly discernible DGGE patterns or defined DGGE bands, and are therefore not in­cluded in this study." But of course they found Archaea! For this, they applied their DGGE technique to conserved genes other than 16S rDNA. They found, also with a clear depth distribution, archaeal and bacterial ammonia monooxygenase sequen­ces (amoA). Moreover, they could confirm the presence of Archaea capable of methano­genesis and methane oxidation by PCR signals for the methyl‑coenzyme M reductase alpha subunit gene (mcrA). Since I wanted to point out DGGE as a technique here, I just mention these results of their study for completeness.

I said above that DGGE "was once a nifty way to explore..." Today, everything that can be sampled can be sequenced in toto, and the microbial diversity in the samples later be assessed by metagenomics. Engelen et al. were well aware that their technique has limitations with respect to reso­lution. They state:"In contrast to high-throughput sequencing approaches that yield 104 to 105 sequences per sample (see here and here for recent Guaymas Basin examples), the spatial resolution of DGGE gels limits amplicon separation and identification to approxi­mately a few dozen phylotypes, which are visually tracked in different sampling layers and sediment depths."

Another limitation of the resolution capacity of their techniques stems from the sampling proce­dure, or, more precisely from sample processing (which would equally apply to high‑throughput approaches). Sediments and microbial mats in the Guaymas Basin seafloor show fine-scale topo­graphy, small fluid channels and orifice-like openings that collapse during core retrieval, freezing and slicing. The authors do not address that cutting their sample cores into 2 mm slices is a technical feat, but they concede that the complex three-dimensional topography of microbial niche habitats and their inhabitants is likely to be reduced to an "averaged" layering of homoge­nized sediments (Figure 1). Also, the smooth transitions of the intensities of individual bands between the layers in the DGGE gel may point to such an "averaging" effect (Figure 2).

The closer one gets to the physical dimensions of the "small things" and their habitats, the more elaborate the experimental efforts to elucidate them become. Engelen et al. propose that solu­tions toward preserving the original microbial community architecture should include the fixation and fluorescence in situ hybridization (FISH) analysis of entire sediment slices containing multiple micro­bial consortia, as recently demonstrated in Sonora Margin cold seep sediments. To push the resolution even further, perhaps into the sub-micrometer range, there are currently several pro­mising approaches that explore the combi­nation of microscopy with mass spectrometry. It is too early for now, but a future 'Of Terms in Biology' entry in STC may well have the title: CLEM-SIMS (correlative fluorescence microscopy, transmission electron microscopy and secondary ion mass spectrometry). In principle, this would then be, albeit on a different scale, the combination of Google Maps with Google Street View.