A Whiff of Taxonomy – Biostraticola tofi

No, Biostraticola tofi is not a "flagship bacterium" of molecular biology like E. coli, which was re­cently celebrated by Roberto. In fact, it's hardly known even among hardcore microbiologists! Yet this species is a close relative of E. coli, loosely speaking a first cousin. But as it goes in star-stud­ded families, older and younger siblings or cousins are rarely in the spotlight. Except right here now. 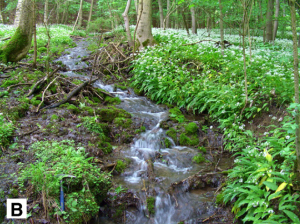 Verbarg et al. (2008) isolated Biostraticola tofi as part of the DFG-funded project "Microbial control of mineralization processes in non-marine biofilms." The project aimed at a better understanding of microbial effects on biofilm calcif­ication, and ambient water chemistry in a highly calcium-saturated setting (Westerhöfer Bach, Harz Mountains (Lo­wer Saxony, Germany; Figure 1). They had isolated bacteria from a biofilm of a tufa deposit in a rivulet ─ think of stro­matolites ─ and plated them under heterotrophic and aerobic conditions for two days at 18°C. Selecting against Cyanobacteria, roughly half of the strains isolated from the rivulet were Flavobacteriales, while strains with different phenotypes were affiliated to Firmicutes (40%), Actino­bac­teria (14%), and different classes of Proteobacteria (24%). One isolate of the latter, isolate BF36, turned out to be a solitaire in their collection of ~2,000 strains, and 16S rRNA phylotyping revealed that it is affiliated with the Enterobacteriaceae. 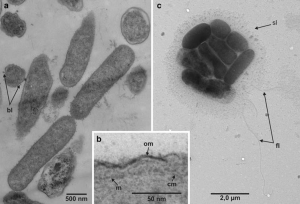 During exponential growth, BF36 cells showed a typical Gram-negative cell wall architecture (Figure 2b), and from ultrathin sections when analyzed using transmission elec­tron microscopy (TEM) they appeared as rods with a mean length of 1.64 µm and mean width of 0.9 µm.

Characteris­tically, many cells showed expression of outer membrane blebs (Figure 2a). The cell morphology often ap­peared ir­regular in size and shape, which may be in­di­ca­tive of osmo­sensitivity (Figure 2). Cells tended to organize in loose con­sortia and were coated by a massive slime layer (Figure 2c). Verbarg et al. summarized their microbiological characteri­zation of isolate BF36 in the description of a novel genus:

Gram-negative, nonmotile, non-spore-forming, and rodshaped. Catalase positive and oxidase negative. Facultatively anaerobic. Fermentation of a wide range of carbo­hy­dra­tes. No gas from glucose. Major fatty acid methyl esters are C16:0 and C16:1x7. Isopren­oids are ubiquinone Q8 and menaquinone MK8. The mol% G+C of DNA is 54.2. Other essential characteristics of this genus are given in the description of Biostraticola tofi. Phylogenetically a member of the Enterobac­teria­ceae. The type species is Biostraticola tofi.

The genus Biostraticola is described above as non-motile but cells of the type species Bio­stra­ti­co­la to­fi BF36T occasionally sport flagella, as seen in Figure 2c. A contradiction? Well, yes, as it is well known that the synthesis of flagella is generally dependent of growth conditions. Thus, a charac­terization of the entire genus as "non-motile" is questionable. More problematically, the genus Biostraticola is described as "Phylogenetically a member of the Enterobacteriaceae."

The phylogenetics of the order Enterobacterales is anything but clear. Its division into (taxonomic) families explored by Adeolu et al. (2016) gave conflicting results depending on whether tree-build­ing and grouping was done using 16S rRNA sequences, whole‑genome sequences, concatenated ribosomal‑protein sequences, concatenated "core" proteins, or conserved signature indels (CSI). Their consensus model of seven families places Biostraticola in the Enterobacteriaceae, that is, in the same family as E. coli. But I will show that a grouping into the family Pectobacteriaceae, which includes the genera Sodalis, Pectobacterium, Lonsdalea, Brenneria, and Dickeya, seems more reasonable (see here for the seven families defined by Adeolu et al.; Biostraticola and Sodalis are marked by blue arrows). Since the genome sequence (~4.3 Mb) of B. tofi is known, I looked at its replication initiator protein, DnaA, and its chromosomal replication origin, oriC (full disclosure: I have been studying the process of replication initiation in bacteria for a long time and am not done with it). 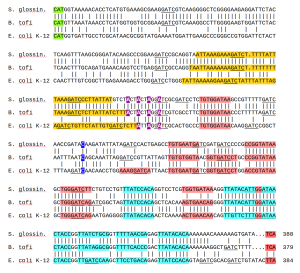 For the initiation of chromosome replication, DnaA binds to and acts on oriC. The DnaA proteins of B. tofi, S. glossinidi­us, and E. coli are 100% identical (except for the notoriously highly variable and probably unstructured domain 2) and are therefore not suited for detecting phylogenetically sig­nificant differences. The oriCs of B. tofi, S. glossinidius, and E. coli are different enough to provide a phylogenetic signal (Figure 3). By BLASTn similarity search, the Sodalis and Bio­straticola oriCs are 76% identical, the best BLAST hit when searching all Enterobacterales DnaA sequences. But BLASTn similarity of both with E. coli oriC did not exceed 71%, a significant difference (also with an untrained eye, you can spot more and longer conserved sequence patches be­tween B. tofi and Sodalis than for E. coli). However, the main structural elements ─ the "DNA unwinding element" (DUE) where origin unwinding occurs during initiation, the DnaA-trio motif for single-stranded DNA binding of DnaA, and the DnaA box clusters for double‑stranded DNA-bind­ing ─ are very well conserved, including their spacing. This is just a detail and not a thorough analysis. But it does indi­cate that B. tofi fits better into the family in which also So­dalis is grouped.

The genus Biostraticola is just one of 68 validly described genera of the Enterobacterales, and the only described species of the genus, Biostraticola tofi, has no known properties that would make it stand out. There are way too many "stars" in the order Enterobacterales already, and these have been studied for decades (not just E. coli, mind you!). Here's a refresher from the basic clinical mi­crobiology course: Enterobacterales are the pathogenic E. coli, and genera containing pathogen­ic species: Shigella, Salmonella, Klebsiella, Enterobacter, Serratia, and Yersinia. And there are numer­ous important and well-studied plant pathogens in the order Enterobacterales, Erwinia, Pectobac­terium, Dickeya and Pantoea among them.

Enterobacterales aren't all pathogens but they are ubiquitous. You find them as commensals in/on plants and animals (insects, arthropods, vertebrates), or free-living in soil and freshwater ─ like B. tofi ─ and in coastal seawater. Quite a few pathogenic species have been tamed by their eukar­yo­tic hosts and now serve as mutualistic symbionts or endosymbionts. Various Serratia and Sodalis species should be mentioned here, and we recently featured the Plautia stali─Pan­toea sp. symbio­sis. For some endosymbionts with reduced genomes and highly skewed AT-content, it is virtually impossible to track from which free‑living species of Enterobacterales they evolved, think Buchne­ra, Stammera, Nardonella, and Wigglesworthia among some 30 other 'Candidatus' species. So, un­less an endosymbiont is found, by chance, with "family ties" to Biostraticola tofi all that remains for this bacterium today is: the curtain.