In the Company of Bacteria: Amoebae

In times long past, highly evolved eukaryotes, for example biochemists, oc­ca­sio­nal­ly quipped that bacteria were nothing more than a bag of enzymes. Well, from the perspective of bacteria, one could return the com­pliment: eukaryotes, for example single-celled amoebae, are little more than a bag of bacteria. A hyper­bole for the sake of a pun? Not, if it comes to Acanthamoeba species.

"Acanthamoeba spp. are among the most prevalent protozoa found in the environment. They are distri­but­ed worldwide, and have been isolated from soil, air, sewage, seawater, chlorinated swim­ming pools, domes­tic tap water, bottled water, dental treatment units, hospitals, air-conditioning units, and contact lens cases. Additionally, they have been isolated from human skin, nasal cavi­ties, throats, and intestines, as well as plants and other mammals." (Wikipedia) 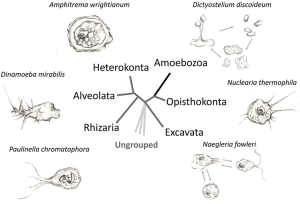 Figure 1. Schematic representation of am­oe­ba diversity. Amoebae are spread in several supergroups, including Amoe­bozoa, Rhizaria, Excavata, Heterokonta, Alveolata, Opisthokonta, and other un­grouped species. Amoebozoa (black) is the only group that solely consists of amoebae. Source. Frontispiece: The first illustration of an amoeboid, from Roesel von Rosenhof's Insecten-Belustigung (17­55). Source

There are presently 30+ described species in the genus Acanthamoeba (phylum Amoebozoa, see Figure 1), and Shi et al. (2021) list in their review of The Ecology and Evo­lution of Amoeba-Bacterium Interactions a whopping 35 bacterial species from various phyla that are known for non‑predatory interactions with one or more Acanth­amoe­ba species. "Non‑predatory interactions" means that these bacteria do not simply serve the amoebae as food but have been found either as intracellular commensals, or as mu­tualists, or as pathogens. Or, depending on growth condi­tions, in any of these roles ─ including eventually serving as food, mind you.

A hint for medical microbiologists interested in human pa­thogens: You will spot some of the "usual sus­pects" in the list of bacterial species... but skip it and continue to the next paragraph if you deem "35 bacterial species" sufficient to attest diversity:

The list may not even be complete, as I miss, for example, Legionella pneumophila (class Gamma­pro­teo­bacteria) known to survive and replicate within both Acanthamoeba castellanii and A. poly­phaga, and "Candidatus Nucleicultrix amoebiphila" (class Alphaproteo­bacteria) that infects A. cas­tellanii and makes itself at home in its nucleus (see here in STC). 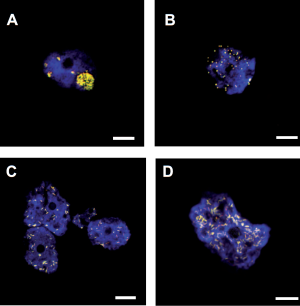 Also missing from the list are the Vibrios. Van der Henst et al. (2015) observed that V. cholerae can resist intracellular killing by A. castellanii. Non‑digested bacteria were either released or established a replication niche within the con­tractile vacuole. The bacteria were maintained therein even upon encystment of the amoebae (in the literature, you also find "amoebas" or "amebas", reflecting English's preference for the 3'-s to indicate the plural and its reluctance to use the œ), and ultimately returned to the aquatic habitat via lysis of their hosts. It's more complicated for Vibrio para­hae­­mo­ly­ti­cus that seems to resist predation by A. castellanii but depends on an unidentified diffusible factor secreted by the amoebae for long-term survival in a co‑culture (micro­biolo­gists have no special term for such an interaction that smells a bit like spooky interaction at a distance).

To prevent any misunderstandings I should add that one usually finds one or a few bacterial species in a single amoe­ba, not the whole zoo. In fact, most of the human patho­gens in the above list were found in a direct test of whether they can "non‑predatory interact" (in the above sense) with easily cultured Acanth­amoebae, for example A. castellanii. Generalized, such studies have led to a paradigm shift in epidemiology over the past two decades, insofar as environ­mental amoebae, not just Acanthamoebae, are now consi­dered as natural reservoirs of many human pathogens. As one example, the plague bacterium, Yersinia pestis, that is known to circulate in the environment in rodents and is transmitted among them by fleas, was found to survive and propagate for days in the vacuole of Dictyostelium amoe­bae (better than in A. castellanii). 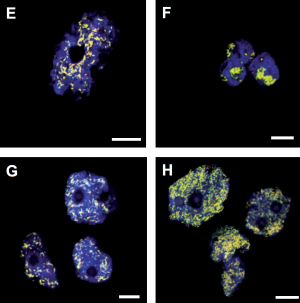 But how does it actually look like in the wild? Which bacte­ri­al endosymbionts are found in environmental Acanthamoe­ba isolates? Schmitz-Esser et al. (2008) addressed this ques­tion in their study of of ten novel Acanthamoeba strains isolated from soil and lake sediment samples from Austria, Tunisia, and Dominica. Eight of the ten isolates, tentatively assigned to the Acanthamoeba genus based on morpholo­gy, con­tained intracellular bacteria as revealed by DAPI staining (fluorescent DNA dye). 18S rRNA sequencing con­firmed that all isolates belong to known 18S-subtypes of Acanthamoeba (see here for a tree).

They localized the endosymbionts in their hosts by fluorescence in situ hybridization (FISH) and found them distributed in the cytoplasm with no indication of a preference for certain organelles and in considerably varying numbers (Figures 2 + 3). Only the two Parachlamydia spp. showed cell clustering, which may point to their residing in large vacuoles resembling the host-derived inclu­sion characteristic for known Chlamydiae (Figure 2A, Figure 3F). Note that Schmitz‑Es­ser et al. con­firmed the presence of just one endosymbiont in each of their different hosts as they used a dual-labeling strategy for the bacteria (a bacteria-specific probe (blue) and a species-specific probe (red) and found only a single signal type (blue+red=yellow) in every sample besides the eukaryote-speci­fic probe for the host (blue).

This study by Schmitz‑Esser et al. points to ─ in their own words ─ "the existence of only a limited number of phylogenetically different groups of obligate bacterial endosymbionts of Acanthamoe­ba spp., showing a global distribution. This might suggest that adaptation of bacteria to long-term intracellular symbiosis with Acanthamoebae has originated only a few times during evolution." I stumble over the "obligate" because they did not show this experimentally in their study and only refer to comparable studies. The "obligate" will become debatable even for Chlamydiae, which until not so long ago were known exclusively as obligate intracellular pathogens of vertebrates: in a study from 2020, Dharamshi et al. describe their discovery of an astonishing variety of Chlamy­diae in deep anoxic marine sediments from the Arctic Mid-Ocean Ridge, many of them potentially free-living.

That said, I agree with the concluding remarks of Schmitz‑Esser et al. that the (in 2008) ongoing genome sequencing projects for Acanthamoeba castellanii Neff and several Chlamydiae "will help to understand similarities and differences between these symbionts and the interactions with their Acanthamoeba hosts, as well as the role of free-living amoebae as evolutionary training grounds for facultative intracellular bacteria."