A decade ago, Elio wound up a piece on endocytosis by E. coli with the bold remark: "If indeed E. coli is only one protein away from endocytosis, perhaps this work will compel us to cross endo­cytosis off the list of physiolo­gical traits that are exclusive attributes of the eukaryotic cell plan." For sure, expressing human caveolin‑1 in E. coli to tempt it to endocytose was an artificial sce­na­rio. But already back in 2013, Merry pointed out that while endo­cy­tosis is rare among bacteria, it is not unheard of, and the en­do­cy­to­sis-like up­take of Pseudomonas phage φ6 by its host serves as example. Want more examples?

Enter Ki­ta­sa­to­spo­ra vi­ri­di­fa­ciens, a close relative of Strep­to­my­ces (see here and here in STC). In a recent post, Roberto went into detail about the work on Ki­ta­sa­to­spo­ra done in the labs of Dennis Claessen and Gilles van Wezel at Leiden University, NL. In short, the researchers had found that the outgrowing mycelial tips readily shed their cell wall under osmotic stress and continue to live as protoplasts (they call these cells "S‑cells"). Such S‑cells can be separated from the mycelium and live on for days, but they proliferate only ─ and form colonies on solid agar plates ─ upon restora­tion of their cell wall. Roberto hypo­the­sized that S‑cells could escape the immune system of plants and travel through their tissue (rather than growing inside the tissue as mycelium). This has not yet been tested but Ongenae et al. (2021) found that S‑cells escape infection by phages! To get rid of their cell wall, at least temporarily, is certainly a clever strategy of bacteria as it is a preferred target of many phages. 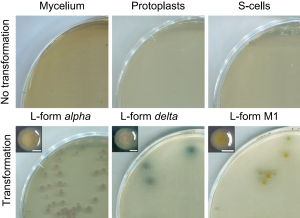 Figure 1. DNA uptake by cell wall-defi­cient cells. Mycelium (n=3), protoplasts (n=5 from two experiments), S-cells (n=7 from two experiments) and L‑form lines alpha (n=3 for both 4-and 6-day-old cells), delta (n=2 for both 3-and 7-day old cells) and M1 (n=1 for 3-day-old cells) were in­cubated with plasmid DNA (pRed*) for 18–24 h, plated on selective me­di­um and in­cubated at 30°C to select for trans­formed cells. A close-up of the colony morphology of the L‑forms is given. Scale bars indicate 1 mm. Note that only L‑ forms show consistent DNA uptake. Fron­tispiece: Popping endocytosed balloons (detail). By Shraddha Shitut. Source

Now Renée Kapteijn, Shraddha Shitut and colleagues have published a study showing that Ki­ta­sa­to­spo­ra is capable of endocytosis. To get there was a convoluted journey, and I will guide you stepwise along the way. They had noticed that rarely and spontaneously some of their carefully tend­ed S‑cells proliferated without having restored the cell wall. They were able to cultivate some of these weirdos as rea­son­ably stable lineages whose single cells behave like typi­cal L-forms, that is, they're devoid of the cell wall (CWD) and require continuous osmotic stabilization. They divide by blebbing, that is, exocytosis of cytoplasmic content via mem­­brane-bound vesicles, rather than by FtsZ‑driven bi­nary fission or orderly budding as yeasts do. The ploidy of these cells is variable, and their chromosomes carry muta­tions, deletions, and rearrangements (the latter was also observed for transformed protoplasts upon re­ge­ne­ra­tion).

Kapteijn et al. were interested to learn if these Ki­ta­sa­to­spo­ra L-forms were amenable to genetic manipulations by transformation. They were indeed, much like conventionally prepared protoplasts or S‑cells, by PEG‑based transforma­tion with plasmid DNA (no one understands how exactly po­ly­ethyl­ene‑gly­col (PEG) based trans­for­ma­tion works but it usually does work with bacterial, fungal, and plant protoplasts). Surprisingly, unlike protoplasts or S‑cells, the L‑form lineages could be transformed by simply adding "naked" plasmid DNA and prolonged incubation (Figure 1). Could natural competence, that is, the ability to take-up extracellular DNA via type IV pili (T4P) and a dedicated membrane‑bound protein complex be at play here? 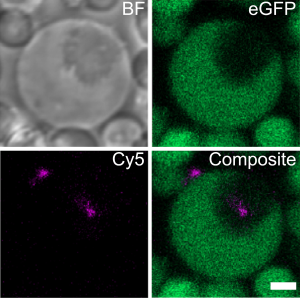 The Ki­ta­sa­to­spo­ra genome encodes bona fide homologs of the B. subtilis ComEA (DNA-binding) and ComEC (membra­ne channelling) competence proteins. When Kapteijn et al. replaced the neighboring comEA and comEC genes simul­taneously with an apramycin resistance cassette in the L‑form lineage alpha, they saw no significant effect on the transformation efficiency. This indicated that DNA uptake by L‑forms occurs in­de­pen­dent­ly of genes homologous to the canonical DNA translocation machinery. But how?

The researchers followed, using fluorescence microscopy, the path of externally-added, Cy‑5-labelled plasmid DNA into L‑form cells that expressed eGFP in their cytoplasm. Figure 2 shows a typical result with internalized plasmid DNA (magenta) contained in what resembles a vesicle in the cytoplasm (green). Note that some plasmid DNA is still outside the centrally located globular cell, and the globular internal vesicle is devoid of eGFP fluorescence, indicating that it has not merged with the cytoplasm. Don't miss the animated 3D reconstruction of this mi­croscopy experiment, which is particularly impressive if you are struggling with the 2D images.

Kapteijn et al. reasoned that such internal vesicles could have originated by an invagination of the mem­brane, whereby extracellular material becomes trapped inside the vesicles. To test this, they in­cu­bated eGFP-expressing L‑forms with the fluorescent membrane dye SynapseRed (equivalent to FM5‑95). And indeed, the membrane dye stained the cell membrane of the L‑forms but also the mem­branes of internal vesicles after overnight incubation (see here). Since SynapseRed is mem­brane‑im­per­meable, the consistent staining of the vesicle's membrane must have occurred while it was still part of the L-form membrane!

Figure 3. Formation of internal vesicles and uptake of extracellular material in L-forms. Representative micrograph of the formation of foci and ring-structures of DivIVA-eGFP in alpha pKR2 (green) af­ter overnight incubation with Dextran-Texas Red (D-TR, magenta). More than 50 observations from one experiment. Note that L‑forms are able to take up fluo­rescently stained DNA and dextran by the formation of internal vesicles. Source

Endocytosis requires membrane remodelling, especially the formation of regions of negative membrane curvature (this applies also to blebbing). The divisome protein DivIVA (pro­nounced "Div‑4‑A") of Firmicutes and Actinobacteria binds preferentially to such negatively curved membrane regions, eventually forming a necklace-type oligomer that encircles a membrane "bottle­neck". Kapteijn et al. found Ki­ta­sa­to­spo­ra DivIVA tagged with eGFP as complexes close to internalized ve­sicles and even observed said necklace structures (Fi­gure 3). However, the transformation efficiency of a ΔdivIVA mutant was comparable to that of the divIVA+ parent of the L‑form lineage alpha. Therefore, DivIVA is not a trigger of endocytosis but is, for fluorescence microscopy, a welcome cytoplasmic marker for endocytosis when fused to eGFP.

I mention for the sake of completeness that Kapteijn et al. also demonstrated uptake via endocy­tosis of lipid nanoparticles and dextran in addition to DNA uptake. Strikingly, they found a signi­ficant reduction of dextran uptake by L‑form cells in the presence of 2.5 mM sodium azide (NaN3), a potent inhibitor of the respiratory chain, and incubation at 4°C inhibited uptake completely. This suggests that the uptake process in L-forms, the internalization of external material by membrane invagination, is energy-dependent like endocytosis in eukaryotic cells. Ki­ta­sa­to­spo­ra L-forms thus dispose of a complete endocytosis program that is on par with that of eukaryotic amoebae. 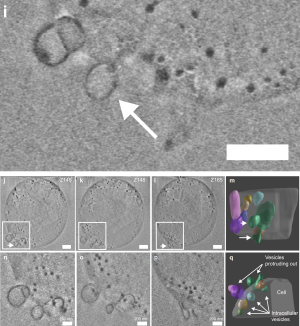 (Click to enlarge)
Figure 4. 3D cryo-fluorescence and cryo-FIB-SEM of L-forms reveal their ultra­structure in high resolution. j–q Analysis of the inter­con­nected vesi­cles of the cell in (i) (n=1). j–l Three consecutive slices showing the interaction of different ve­sicles. n–p show higher magnification of the regions in white boxes in j–l, respec­tively. m,q 3D segmentation of n–p. While some of the vesicles are intracellular, others protrude out of the cell. A com­plete connected vesicle structure is shown in green (m,q) and indicated by white arrows (i,j,l,m). The cell in panels i–q is around 4 μm in size. Scale bars re­present 500 nm unless otherwise speci­fied. Source

Finally, the researchers wanted to gain a more detailed in­sight into ultrastructure and composition of intracellular vesicles in Ki­ta­sa­to­spo­ra L-forms and applied for this pur­pose advanced electron microscopy, cryo-CLEM and cryo-FIB-SEM. They found that L-forms mostly contain (unlike in the images shown here in Figures 2&3) multiple vesicles of varying sizes, in some cases forming clusters that protruded out of or intruded into the cell membrane (Figure 4). Fully internal vesicles, conspicuous by a deviating electron den­sity with signs of lipid droplet formation, may release their contents into the cell after vesicle degradation (Figure 4, see here for a paricularly clear example). This last point, vesicle degradation inside L‑form cells, is still opaque. But it clearly happens quite efficiently as they could reproducibly trans­form their L‑form lineages via vesicles with plasmids whose genes were expressed after vesicle uptake, degradation, and mixing of the contents with the cytoplasm.

The electron microscopy experiments show that both bleb­bing, that is, expulsion of cytoplasmic content via membra­ne-bound vesicles, and endocytosis are structurally related and inherent properties of the malleable cell membrane. So, "honorary amoeba" is all well and good. Still missing are the pseudopodia to secure Ki­ta­sa­to­spo­ra vi­ri­di­fa­ciens te­nure. As Renée Kapteijn said on Twitter: "It would be very cool if we can make it even more blobby and amoeba‑like." So, wait for it...

On a more serious note but highly speculative, Kapteijn et al. consider it possible that the profi­ciency for endocytosis in present-day L‑form bacteria is an evolutionary ancient ─ and today rarely used ─ legacy of primordial prokaryotic cells that did not yet possess cell walls and regularly ex­changed cytoplasmic contents among each other. A long, long time before an archaeon endo­cyto­sed a properly cell-walled proteobacterium en route to become a eukaryotic amoeba.