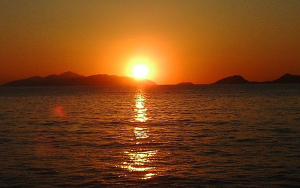 Participants of the Spetses Summer School first travel to Athens and then embark on a nearly three-hour ferry ride across the Saronic Gulf to reach Spetses. Consequently, al­most everyone is tired upon arrival. But no matter how ex­hausted, everyone feels invigorated by the magical feeling of being on this island. The stunning sunrise of the first morning of school already augurs well for what is to come during the next ten days. In that moment, it is easy for the mind to wonder... Why am I so fortunate to be here? Of equal importance, however, should be a desire to know how come a summer school in microbiology is held in Spet­ses? Who made this all possible? This history starts with an astonishing woman scientist, Marianne Grunberg-Manago.

Marianne – well-known for her discovery of polynucleotide phosphorylase – was stimulated by what she recognized as a pressing need for advanced study schools in molecular biology. Here's an excerpt from her writing pointing to why she was stimulated to start a summer school on a Greek island:

In the middle of the 1960s, there was a shortage of Advanced Study Institutes in Mole­cu­lar Biology and NATO representatives approached me to organize one. They were keen on holding it in a country where molecular biology was not taught at the University. I thought the time was appropriate for an Institute on Molecular Biology and that it would be nice to organize it on a Greek island. I believed that a pleasant location would contri­bute to a successful School and I felt that the environment would help to attract the best lecturers and encourage them to stay the whole time at the School, around two weeks. They would be relaxed and in a mood to interact socially and scientifically with the stu­dents. 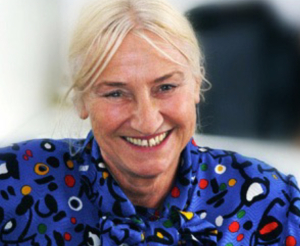 Working together with two Greek nationals who had re­cently completed post-doctoral training in molecular bio­logy (Thanos Evangelopoulos and Efstathis Bricas), Mari­anne honed in on Spetses as the ideal site for a summer school. Why?

In Spetses there was a boys' college – The Anargyrios and Korgialenios School – which was vacated during the sum­mer months. The first summer school was held in 1966 and was considered a great success. Again, Marianne's words:

The first meeting (in 1966) was very successful: Dr. Zervas and Dr. Pullman (who previ­ous­ly organized two NATO Schools) acted as co-organizers. Francis Crick came on his boat as well as Jacques Monod, who introduced me to Melina Mercouri. The course im­mediately achieved a good reputation and should be organized from that time on every year. Unfortunately, this endeavor had to be cancelled already in 1967 and in 1968, too, because of the 'putsch' of the colonels.

Political instability in Greece continued to sporadically impede the regular meeting of the summer school. But since 1975 the school has been held regularly in Spetses. With time, the focus diversi­fied enough so that different themes were taken up each year. By the turn of the century a sum­mer school that focused on the molecular biology of bacteria was being held every four years, still under Marianne's direction. Both Pascale Cossart and I first participated in the school in 1998.

Two things changed for the 2002 edition of the school. First, Marianne passed the baton of course director to Pascale Cossart (who in turn asked me to help as co-organizer). Second, by then the infrastructure of the Anargyrios and Korgialenios School had severely deteriorated (it had ceased to function as a college in 1983) such that Pascale and I decided to hold the school entirely within the Spetses Hotel, where the faculty had stayed in prior years. It has proven to be an ideal venue.

From 2002 to 2013, the school was largely focused on host-microbe interactions. As developments in the field came at an ever-increasing pace (and because Pascale and I so thoroughly enjoyed the experience) we decided to hold the school every three years starting in 2010. Then, as we per­ceived that the entire field of microbiology was in the midst of a "revolution," we named the school "The New Microbiology." How this term is interpreted is likely to be personal. For me, it's the change in worldview that has emerged from the blending of the conceptual recognition that most of the planet's biodiversity is microbial and the many technological advances – mostly notable in nucleic acid sequencing – which allow a peak into the potential functionality of that microbial diversity. 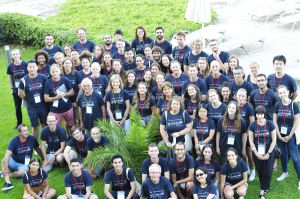 (Click to enlarge)
The Participants of The New Microbio­lo­gy, 2022. Image credit: Nazgul Sakeno

The program of the 2022 edition of The New Microbiology School had topics spanning across the range of scales, from intracellular molecular mechanisms to functional analyses of complex microbial communities. Recognizing the impor­tance of rapid vaccine development in response to the pan­demic, we were fortunate that Rino Rappuoli (who many years ago had been a student of the Spetses School in Mo­le­­cular Biology) delivered the EMBO Policy Lecture. In ad­di­tion, Edith Heard (EMBL Director General) gave the special EMBO Women in Science Lecture.

A key feature of the Spetses School has always been the close interactions between students and faculty outside the lecture hall. These interactions include small groups that gather during lunch and dinner as well as the seaside poster sessions. This year we ran a very successful experiment where small groups of students prepared presentations for which they were mentored by indivi­dual lecturers. By the end of this year's school, I was both exhilarated and exhausted – as is always the case.

Now, after seven consecutive Spetses schools, Pascale and I are passing on the role of organizers to Nassos Typas and Bruno Lemaitre, both of whom have participated in several prior editions and are deeply committed to keeping the Spetses Microbiology School alive.

To end this post, I'll describe a very special tradition that I inherited from Marianne: at the end of the school she awarded a copy of the novel The Magus to a student that exemplified the innova­tive spirit of "thinking outside the box." I certainly hope this tradition will continue. Why did Mari­anne choose this novel? Turns out its author, John Fowles, was an English teacher at the Anargy­ri­os and Korgialenios School in the early 1950s. In  writing The Magus – over the twelve-year period af­ter he left Spetses – Fowles drew inspiration directly from his experiences of living on the island. In my view, the novel encapsulates the beauty and magic of what it means to spend time in Spetses deeply im­mersed in freely thinking with an open mind. And its postmodern style requires out-of-the-box thinking – great training for practitioners of "The New Microbiology."

STC readers around the world take notice: next edition of this summer school is scheduled for 2025.