These days in New England – specifically in Cambridge, where I am now – the air is crisp as the temperatures are beginning to drop and the leaves are already displaying magnificent colors. Fall is in full swing, and summer is a memory. But this past summer, once again, left me with the de­lightful memory of microbiology summers schools in which I was fortunate to participate. Among the numerous teaching experiences that I've had over the last six decades, advanced microbiology summer schools rank at the very top. While you might say that mention of these activities now that they are just over does not make sense, I will argue quite the opposite. For individuals early in their training – I mean mainly graduate students and post-docs – I think fall is the perfect time to begin to explore possibilities. Determine what's being offered the following summer and which school might be best for your training. Then begin planning the application process and, most im­portantly, learn about sources of funding. That way, as soon as course offerings are announced early in the year, you'll be ready to dive into the process. Here's another thought, for interested faculty: begin thinking as to what it would take to get a chance to teach in one of the existing schools or, better yet, consider organizing one! That process will certainly take several years but believe me, it is certainly worth the effort. 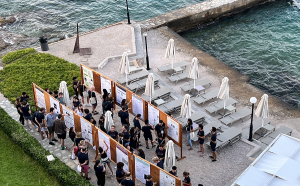 What's so special about summer schools? In my view it's dif­ficult to beat the opportunity afforded by full immersion into advanced topics in settings where students and instruc­tors interact with minimal distraction. That these courses are usually offered in extremely nice locations is, of course, a big plus. There a many advanced summer courses in mi­cro­biology and I can't give a comprehensive list here. Here's a small list based solely on the fact that I have participated in them, or I've heard a lot about them, just to whet your appetite for them.

There's a lot of history behind these courses. Microbial Diversity at Woods Hole, where I've been lucky enough to lecture many times over the years, recently celebrated its 50th year. Some STC readers might recall George O'Toole's 2017 post on it. The Hopkins course represents a "rebirth" of the fabled "van Neal" course which Bernard Strauss described in an STC post from 2014. Over many years I have been part of the last two courses on the list, Spetses and Dubrovnik as I like to call them. They are thus very near and dear to my heart, and I'll be sharing some of their history and my thoughts on them in a couple of future posts. Stay tuned!