Today I'm tak­ing you on a short tour, a (bi)­cycle tour. Don't be alarmed, it won't be a long ride. And no pre­vi­ous fit­ness check! You can cycle di­rect­ly on your screen. A mi­ni­mum of brain ac­ti­vi­ty is ex­pect­ed though. You gues­sed it, it's about the Krebs cycle. More pre­cise­ly: The Krebs (Bi)­Cycle (Fig­ure 1). Let's pedal! 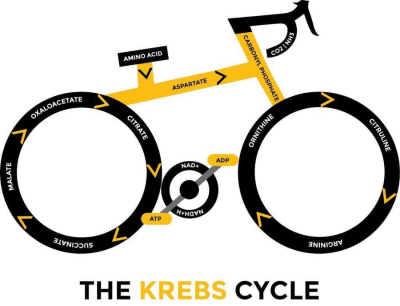 (Click to enlarge)
Figure 1. The Krebs Cycle. Anonymous. Source The Uni­versity of Sheffield

Anyone who has ever been remotely exposed to biochem­istry has heard of the Krebs cycle (synonymous: tricarb­ox­ylic acid (TCA) cycle, citric acid cycle)... and quickly forgotten the eight-or-so steps it takes to go around the circle once. This is regularly made fun of on the internet: "Learn Krebs Cycle, Forget Krebs Cycle, Back to Step One". So, a learning aid would be helpful, preferen­tially a visual one (not only for students but also for PhDs and well beyond). That's were 'The Krebs (Bi)­Cycle' comes in (for the younger ones also available as meme).

I have to warn you right away, however, that this Figure 1 is a downright sneaky learning aid, as appealing as it looks at first glance. Mind the details!

But why is it still an efficient learning aid despite the flaws mentioned? Here's why ─ but first a brief, subjective look at learning methods. 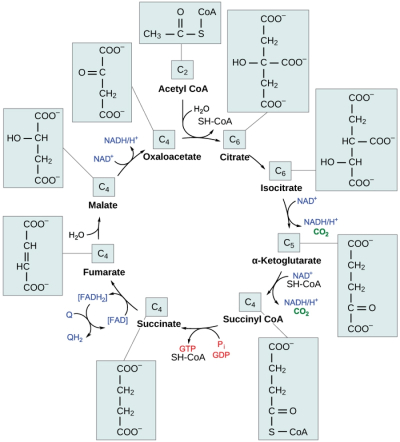 (Click to enlarge)
Figure 2. In the citric acid cycle, the acetyl group from acetyl CoA is attached to a four-carbon oxaloacetate molecule to form a six-carbon citrate molecule. Through a series of steps, citrate is oxi­dized, re­leas­ing two carbon dioxide mo­le­cules for each acetyl group fed into the cycle. In the process, three NAD+ mole­cules are reduced to NADH, one FAD mo­lecule is reduced to FADH2, and one ATP or GTP (depending on the cell type) is produced (by substrate-level phosphory­lation). Because the fi­nal product of the citric acid cycle is also the first reactant, the cycle runs continuously in the pre­sence of sufficient reactants. (Credit: modification of work by "Yikrazuul"/Wi­kimedia Commons). Source

You can, of course, learn the eight steps of the TCA cycle by rote, like a poem. The more layers (number of C atoms, names of enzymes, even chemical formulae, etc.) you pack into your eight steps of the cycle, the more likely it is that the humble poem will turn into a full-blown Irish ballad (as here). This makes memorization very viscous even when using mnemonics. Some people suc­ceed in memorizing an image visually ─ say, Figure 2 here ─ in such a lasting way that they are able to reproduce it flawlessly at any time. I, for example, can do this quite well, but I have fallen flat on my face time and again when it was necessary ─ and it al­ways is when it comes to science ─ to make corrections to a once "permanently saved" image. Yet, whether you memo­rize the TCA cycle visually or as a ballad, the biggest catch is that your memory can only deal with this big chunk if you more or less disregard all the import­ant ins & outs (this may not be true for some neurodiverse people, for example, those with Asperger syndrome).

It is the "ins & outs" that make what is actually a boring traf­fic circle (Am.) or roundabout (Br.) so exciting ─ I beg your pardon, Sir Hans ─ as all major metabolic pathways (sugars, amino acids, nucleotides, lipids) pass across the TCA cycle on their anabolic and/or catabolic routes at least once. And this is the reason why I think 'The Krebs (Bi)Cycle' is, a bit counter-intuitively, such a good learning aid: the rear wheel is only a sketch, but the pedals and the bicycle frame point to important "ins & outs" at the right places as does the front wheel, the ornithine cy­cle. You have to actively assemble the bike yourself from loose parts (textbooks, reviews, origi­nal papers) guided by this minimal construction manual. Thus you get to know the "soldering points" much better than is possible by rote learning or visual memorization. Don't worry, you won't forget again ever!

Medical students are well served with the "classic" TCA cycle that runs entirely, for example, in muscle tissue; anatomically more precise: in the mitochondrial matrix (=cytoplasm) of animal cells. Thus 'The Krebs (Bi)Cycle' is a good start point for learning. For biology students there is an ad­di­tion­al perk. We now know that for the TCA cycle in animals a whole set of "variations on a theme," shunts and shortcuts, up to and including a reverse TCA cycle, exist in plants, fungi, protists, bac­teria, and archaea. It is fairly easy to accommodate these other modules within the minimal con­struc­tion manual of 'The Krebs (Bi)Cycle' as a start point for learning.

If you have had enough  of cycling now, or just need a 10-min break, I recommend for relaxa­tion the essay Krebs and his trinity of cycles by Sir Hans Kornberg (not related to the Kornbergs of DNA and RNA polymerase fame). The author, a student and long-time collaborator of Hans Krebs, not only provides a thorough overview of the crucial experiments that led to the decoding of the TCA cycle, but also plugs-in the other two cycles: the glyoxylate cycle and the ornithine cycle (that's a good part of the "ins & outs"!).

A light final remark  'The Krebs (Bi)Cycle' I've been talking about exists in a larger version too: Bri­tain's biggest bicycle, twice the size of the Cerne Abbas giant (Dorset, UK). In 2014, when the Tour de France started in Leeds for once, The University of Sheffield, UK, commissioned it as a homage to Sir Hans Krebs (1900─1981), their Nobel Prize winning alumnus. Note that the designers had changed the lay­out ever so slightly: the bigger bike has no handbrake(s) but two handlebars offset in perspec­tive instead of one (ha! no hints to metabolism whatsoever). I can imagine that Sir Hans would have liked both versions, he was a fan of bicycles, albeit those with motors.