Atomic force microscopy (AFM) is one of the most powerful tools in studying the surfaces of any material. So it should come as no surprise that it has been used in the study of viral envelopes and biological membranes. One of its great advantages is that it allows biological samples to be stud­ied in vivo and in real time, so that dynamic phenomena such as cell division or the effect of an antibiotic can be observed. 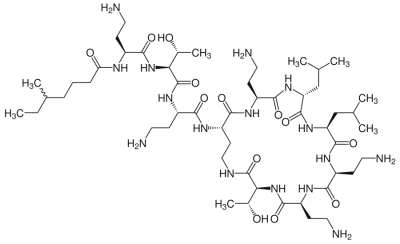 That's what they've done in Sebastian Hiller's group with polymyxin, an antibiotic with a pe­culiar structure. Actually it would be more correct to speak of "polymyxins", since there are different types depending on their composition. One of the most studied polymyxins is E, also known as colistin, and whose structure is shown below (Figure 1). It contains ten amino acids, six of which are 2,4-diaminobutyric acid, so it has numerous positive charges at pH 7. Seven of those amino acids form a ring and the remaining three form a kind of tail. It is a polypeptide that is not syn­the­sized by ribosomes, but by enzymes called synthetases that operate sequen­tially by linking amino acids. The last stages are cyclization and then the subsequent addition of a fatty acid.

Polymyxins are produced by Gram-positive bacteria such as Paenibacillus polymixa and their molecular target is the outer membrane of Gram-negative bacteria such as Esche­richia coli or Pseudomonas aeruginosa, although it can also affect the cytoplasmic membrane. It is consid­ered an anti­biotic of last resort for the treatment of infections with mul­tidrug-resistant bacter­ia. It was assumed that polymyxins acted as a kind of detergent that acted as follows. First the cyclized part was attached to the lipopolysaccharide (LPS) of the outer membrane. After the union, the hydrophobic tail would integrate into the membrane causing disorganization of it. However, there were a number of data that seemed to indicate that polymyxin acted in a different way, such as that the effective concentration of the antibiotic observed in serum was not high enough to have that detergent effect. 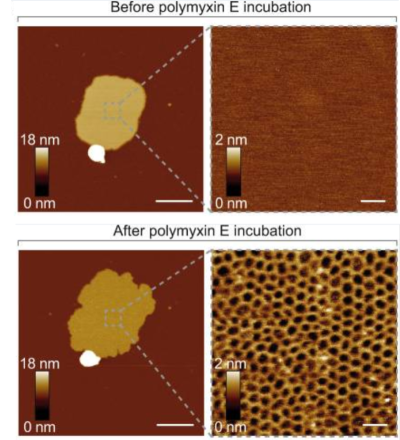 That is the gap they have managed to fill with Hiller's article. For this they have used E. coli to prepare outer membrane vesicles containing LPS. Then they have taken these vesicles and arranged them on a flat surface of mica. Under these conditions the vesicles are arranged as a circular patch of about 100 to 300 nanometers. If you look at it with the AFM what you see is a smooth surface. They then added polymyxin B at a concentration of 1 mg per litre. What they observed is that laminar structures with a pattern of hexagonal cells were formed in the pat­ches. These "honeycombs" protrude between 1 to 1.2 nm above the surface of the membrane patch and each of the cells that com­pose it has a length of 10 nm.

They then conducted a series of different experiments to confirm the result. In one they used a polymyxin-resistant strain whose LPS is altered and presents a reduction in its negative charge with respect to the LPS present in wild strains, so the antibiotic does not bind efficient­ly. In that case what they found is that the hexagonal structures did not form and the patches kept the surface smooth. In others, what they did was chemically alter the LPS and observed that the laminar structures were altered. They also found that these laminar structures were altered if what they modified was the polymyxin molecule. All these data led them to conclude that polymyxin does not interact inspecifically with LPS, but that these interactions are very specific and have been shaped by evolution. The binding of polymyxin decreases the thick­ness, but increases the area and stiffness of the outer membrane, weakening it and causing its rup ture. The model they propose to explain the action of polymyxin is as follows.

(Click to enlarge)
Figure 3. Model of the mechanism of action of po­lymyxins. 1 Polymyxins initially localize on the OM membrane of Gram-neg. bacteria through electrostatic interactions with LPS. 2 On the mem­­brane, polymyxins form hexagonal crys­talline structures that increase the membrane surface area, decrease the membrane bilayer height, and stiffen the membrane. The altered mechanical properties of the OM lead to (3a) the formation of membrane bulging protrusions and (3b) membrane rupture, content leak, which allows progression to the inner membrane and subsequent bacterial death. Source

First, polymyxin interacts electrostatically with the LPS of the outer membrane (1). Subse­quent­ly, the hexagonal crystal structure is formed, increasing the surface of the membrane. Although this structure protrudes above the surface, the thickness of the membrane decreas­es and its rigidity also increases (2). These alterations lead to the formation of pro­trusions in the membrane (3a) and finally to its rupture (3b) causing the release of periplasmic con­tents and polymyxin can reach the interior. The al­terations progress until they reach the cytoplasmic membrane, which causes the death of the bacteria.

As they say in the article, they have seen the unseen. AFM has allowed us to know at the nano­metric scale not only the way in which polymyxin acts, but also how a certain resistance mech­anism works. Something very important in the current fight against multiresistant bacteria. 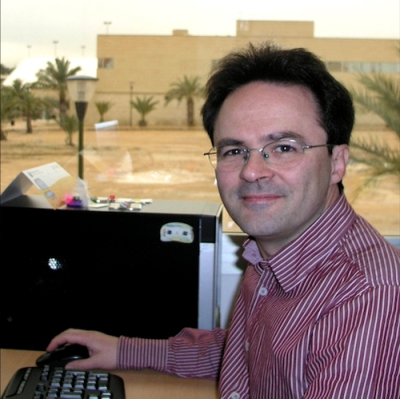 Manuel is a student of the microbiological aspects of popular mo­vies. He has unearthed a surprisingly large number of interesting connections and has commented on them in his blog, Curiosida­des de la Microbiología, as well as in a section of the Bulletin of the Sociedad Española de Microbiología called "El Biofilm," and else­where. He has also written about the use of movies as educational material, emphasiz­ing 'Bugs and Movies', which is about the use of film clips to teach Microbiology. We have often reprinted his ar­ticles in translation.