Glued to the inside of your mouth this very moment (there's a 50% chance) may be plump bacter­ial caterpillars. They cling to your cheek with paired little holdfasts, like the feet of a tomato horn­worm resolutely clasping its stem. Of course, rather than tomatoes and tomato leaves, the diet of these bacteria is you. 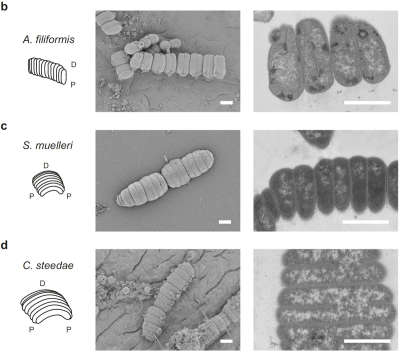 Their entomological appearance is only the start of their strangeness, however. Though these caterpillars don't crawl, they are multicellular, an unusual state of affairs. Moreover, some of the co-joined cells differ physically from their comrades, hinting at specialization (the nitrogen-fixing fortified cells of cyanobacteria called heterocysts are the premier prokaryotic example).

And these bacteria perform at least one more magic trick: they've somehow tilted their world by 90 degrees. That is, they divide longitudinally ─ rather than transversely in the usual fashion ─ by, in the researchers' own words, guil­lo­t­ining themselves (Figure 1).

A team of seventeen European and North American scientists recently tried to answer one of the many questions these bacteria's unusual lifestyle suggests: how did such unorthodox cell division evolve? And then, armed with this information, could they tweak the DNA of a related bacterium to get it perform the same trick?

Hang In There, Baby

Though these particular bacteria live in the mouths of mammals, they belong to a greater dinner club that might be termed "Hanging On For Dear Life to Your Metazoan Meal Ticket". Members of this group seem to share three things: polarity (there is an "up" side and a "down" side), holdfasts affixed to an animal surface, and longitudinal division.

In addition to the inside of your cheek, such bacteria have also been found clinging to the exte­ri­ors of nematode worms, a niche not as unusual as it may seem given that four out of five animals on land are roundworms. 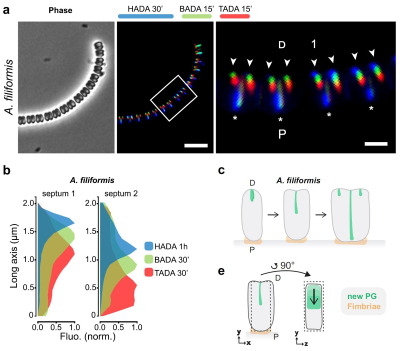 The bacteria on nematodes are unicellular, however. Only in the mouths and guts of mammals have multicellular animal symbionts evolved. And, interestingly, the bacterial caterpillars are all members of a single shape-shifting fa­mily: the Neisseriaceae (Betaproteobacteria). This family is perhaps most famous for one member, N. gonorrhoeae, that causes what used to be termed a "social disease" (a term that to me connotes something quite different today). Another member, N. meningitidis, lives in about 10% of humans, but it unfortunately can also cause meningitis, developmental delay, and/or death in children and young adults. Many other members of Neisseria are harmless inhabitants of mammals.

At least three multicellular species in this family dwell in mouths, only two of which make caterpillars. Alysiella fi­li­formis is the one that does not, and is attached at only one end to its human. After cells divide they remain attached to each other like co-joined twins. They stand shoulder to shoulder with other twins, forming long palisades (Figure 2).

Simonsiella muelleri and Conchiformibius steedae, by con­trast, are attached at both poles, giving them the ca­terpillar look (Figure 3). All three genera divide in the unorthodox longitu­dinal configuration (see here for a phylogeny of the Neisseriaceae). The Canadian and Austrian-led team set out to find out how that might have evolved from a transversely dividing ancestor.

The usual method is more akin to a garrote than a guillotine. A dividing bacterial cell adds new peptidoglycan ─ the stuff of their cell walls ─ in rings assemb­ling at the midpoint of the wall of a rod-shaped bacterium. More peptidoglycan is laid down along the inside of each ring until a new wall is built and daughter cells are severed.

The scientists wondered if a similar mechanism might be at play in multicellular mouth bacteria, and how exactly their division direction changed. They had two ideas on the subject: either the bacteria rotated their axis of division by 90 degrees, or they simply changed shape, retaining the same division plane. 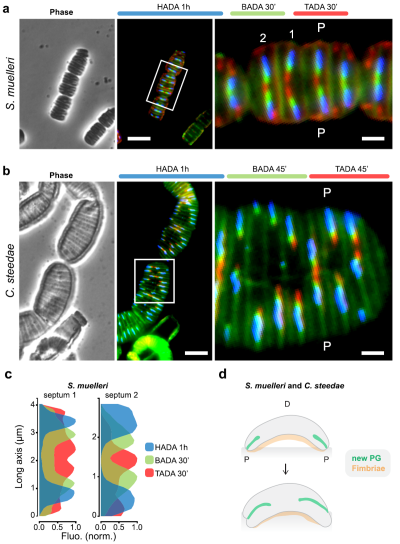 When the scientists infused the bacteria with fluorescent proteins that would reveal how cell wall building progres­sed, they discovered the surprising guillotine maneuver, in which new peptidogly­can was deposited in a solid sheet from one end of the cell to the other. New wall grew from the unattached pole to the attached one in Alysiella and from both attached poles toward the round­ed mid-section of caterpillar cells in Simonsiella and Conchiformibius.

The three species also shared changes to DNA, including the addition, loss, or mutation of a suite of genes. Two of the genes are the bacterial versions of actin and tubulin (and the others may be genes that regulate these genes); the actin homolog guides cells to grow longer, while the tubulin homolog directs the laying of the new wall in divid­ing cells.

They then made many of these same changes to the genes in a typically dividing rod-shaped bac­terial relative, N. elon­gata, to see if they could get it to divide longitudinally like its kin. They could not. But the changes did make fatter cells with correspondingly wider septa (Figure 4).

Taken together, their evidence seems to suggest that the way longitudinally-dividing multicel­lular Neisserias accom­plished their feat was not by shifting the axis of cell division, but rather the pola­rity of their cells. Grow squatter and fatter, and suddenly the transverse division plane appears to be longitudinal. Of course, it does not explain how the garrote became a guillotine, a question that awaits future studies.

A careful comparison of the DNA of the multicellular oral bacteria and that of many relatives also revealed the three species evolved from rod-shaped ancestors on at least two and possibly three occasions. Their nematode relatives represent yet more instances of a similar lifestyle. What could cause such strikingly similar forms to evolve? The authors speculate that conditions on animal sur­faces ─ such as rapidly shed host cells and lots of a foreign substance (saliva, soil, or water) that tends to strip bacteria from their food ─ favor the evolution of microbes that cling and cooperate.

Figure 4. d Schematic representation of a sep­tating wild-type (but antibiotic resis­tant) N. elongata (left) and of N. elongata whose genes were tweaked to be more similar to mullticellular Neisseria. Scale bar 1 µm. Source

Indeed, the authors observed that the multicellular Neis­serias shared adjacent cell walls and an outer membrane ─ yet another striking resemblance to cyanobacteria. Whether the caterpillar cells' cytoplasm is also connected by pores unknown. If some of these cells also specialize (the authors observed an individual with thicker walls every 14 cells in C. steedae), that may further help them withstand nutri­tional stress, they speculate.

Why might we care about how cells change shape? For one, the machinery involved in sculpting and dividing cells could provide targets for new antibiotics.

But these particular bacteria are tempting for another reason: unlike various other animal sym­bionts, they're easy to grow and tinker with. You might recall that STC had featured other longitu­dinal-dividing bacteria before, here and here, and that these gammaproteobacterial symbionts of nematodes are way more difficult to study as they cannot grow in the lab, yet. So studying these odd little Neisserias may not just be a lot of fun; it may also someday solve problems caused by their less endearing relatives. 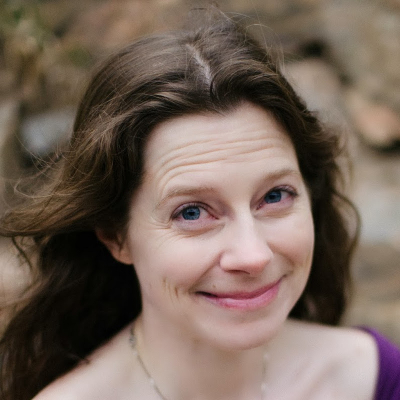 Jennifer Frazer is a freelance science writer and the author of the retired blog The Artful Amoeba at Sci­entific American. She has twice been a guest on RadioLab and written for Scientific American magazine and other publications. She's currently working on a book about slime molds.