Winogradsky ─ you rightly expect the name of Sergei Winogradsky (1856–1953) to come up oc­ca­sionally in a blog that Considers Small Things. But Rothko? Latvian-American painter Mark Roth­ko (1903─1970), one of the proponents of abstract expressionism in the U.S.A. after World War II, is best known for paintings that depict irregular and painterly rectangular fields of color, often lay­ered horizontally.

Before their recent restauration, the colors of Rothko's famed Harvard Mural series in Harvard's Holyoke Center had faded  badly over time due to his use of the pigment Lithol Red (Acid Red 88) together with regular sunlight exposure. Coincidentally and as a nice twist, a reddish-brown pig­ment is formed, among others, in Winogradsky columns under the influence of sunlight. It re­mained to biologist‑turned‑artist Jenifer Wightman to bring Winogradsky and Rothko together in an ad­ven­turous piece of art in 2004. 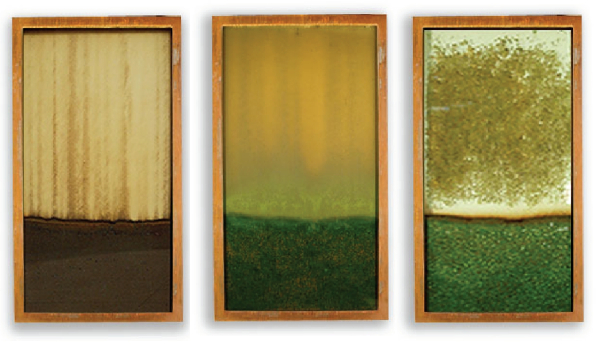 Winogradsky columns – longtime readers of STC may recall our Tal­mu­dic Question #173, and two posts from 2018: Mathias Grote's 'Petri's dish vs. Winogradsky's column – shifting boundaries be­tween purity and mixture of microbes', and Scott Chimileski's 'How to Build a Giant Winogradsky Column'. Therefore, I will not go into details here and let Jenifer Wightman have her say:

"Installed outside, a steel and glass frame – made in the dimensions of Mark Rothko's Untitled, 1949 – was filled with local mud and water from Beebe Lake. By applying a microbiological iden­ti­fication techni­que developed by a 19th century soil scientist, Sergei Winogradsky, pigmented bac­teria existing in the mud and water composed the palette. Though difficult to see individually, mi­croorganisms capable of producing pigments through photosynthesis are found in all kinds of soils. Light intensity, access to nutrients, and oxygen levels all define which position in the soil co­lumn a given bacterium will be able to grow. As these bacteria colonize their optimal zones, they change their environments by depleting their resources and releasing by-products. As a given spe­cies reaches its carrying capacity, the no longer hospitable environment to the original colonizer may now be the optimal environment for a potential predecessor to that zone. Exposing the cross-section of soil to sunlight, traditionally unseen organisms become indicators of the com­plex bio­chemical succession of a soil landscape thus creating an evolving color-field of living pigments." (cited from J. Wightman's website)

In the accompanying paper 'Winogradsky Rothko: Bacterial Ecosystem as Pastoral Landscape', she outlined her approach: "As a formally trained biologist for more than 10 years, I continually ob­serve transitions in the organic and inorganic world. I am compelled by the dynamic flux between matter and energy as it plays out in the destruction and creation of what is, as it informs how life is conserved, mutated, transmitted, or lost. I like looking for patterns that help explain the world. In particular, I am attracted to decomposition. I am intrigued by the 'offensive' smell, the 'vio­lence' of re-appropriation, the applause for the glorified hedonism/agency of the 'creative', and the em­barrassed, the fallen, the visceral 'ugliness' of rot – there is beauty in these moments. De/compo­sition represents beginnings, change, contingencies of cause and effect, interconnectedness, pos­sibility. Sometimes I feel trapped in the stasis of 'reality'. Perhaps decomposition is where my hope for the world lies."

On Jenifer Wightman's website or in her Flickr photostream you can see several detail shots of Wi­nogradsky Rothko. It's worth stopping by there! You also find navigational help by means of which you can follow exactly from which area of the slowly developing "painting" the detail originates.

I frequently hear the complaint from very different people, including scientists, that social media tend to be "toxic" rather than "social." Or at least a distraction from life, real life. True, but occa­sion­ally you get fabulous stimuli on Twitter (if you choose your "bubble" carefully). Just the other day, Manuel Porcar PhD tweeted an image of his "beautiful Winogradsky frame" that I instantly "forwarded" with "but see here!" to Cecilia Flocco PhD, who had just pointed out superb teaching material, a "virtual Winogradsky column" by HHMI BioInteractive. In turn, Cecilia introduced me to 'Winogradsky Rothko,' a work by Jenifer Wightman from 2004 ("yes, definitively more rothko than jackson pollock 😉," was my immediate re­sponse). I had never heard of Jenifer Wightman before! This blog post is what came out of a 10-minute ping-pong on Twitter. Gracias a Manuel y Cecilia!­