Don't worry, STC won't switch to cuneiform without warning. What vaguely resembles a chemical for­mu­la or a cuneiform text is meant to keep the title as short as possible. More verbose: I will take a closer look at Y-shaped bacteria to see if their "irregular" shape points to the mode of cell di­vi­sion, may­be long­i­tu­di­nal or lengthwise di­vi­sion? Thus, in short: I → Y → II ? 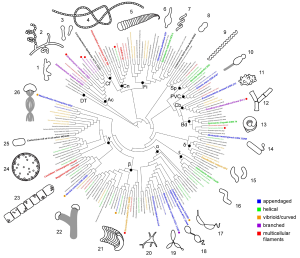 (Click to enlarge)
Figure 1. Legend at the bottom of the page. Source

What is an "irregular shape" in bacteria anyway? According to textbooks (and Wikipedia), it's anything that is not rod-shaped, or sphere-shaped (coccoid), or spiral-shaped. (I have a certain fondness for the ac­cepted and widely used but somehow indecisive shape category "coccobacillus"). How diverse the "landscape of shapes" among the bacteria actually is, was pointed out by Manuel Sánchez in his blog Curiosidades de la Microbio­logía in a 2017 post "On Shape", which he kindly shared with STC. Manuel had referred to the essay of Kysela et al. (2016), and I take the opportunity to remind you of this outstand­ing com­pi­la­tion: voilà, Fig­­ure 1 (legend at the end of this post).

You won't see any genuinely Y-shaped bacteria in Figure 1, but they have been per­col­a­t­ing in the literature for decades. Most often, the term "Y-shaped" is found in the context of Bifidobacterium (Ac­ti­no­mycetota), but also mentioned for Sino­rhizobium (class Alphaproteobacteria). I will then turn to Treponema (Spirochae­tota), and Spiroplasma (Myco­plas­ma­to­ta) in the second part. Note that after the genus/species names in parentheses I have given the new phylum/class names that microbiologists are expected to get used to, if grudgingly (see Roberto's re­cent post).

Bifidobacterium bifidum began its journey through taxonomy in 1899 as "Bacillus bifidus", based on its signature Y‑shaped or "bifid" morphology (Latin bifidus, from bi- + -fidus (findere split). Since it was re­gu­larly found in the feces of breast-fed infants together with lactobacilli, it was later re-named "Lacto­ba­cil­lus bi­fi­dus" but it is now undisputed that B. bifidum and the other 100+ de­scribed species of the genus Bi­fi­do­bac­ter­ium belong to the Actinobacteria (Actinomycetota). You see on the frontispiece a representative "portrait" of Bi­fi­do­bac­ter­ium longum, a favorite of pro­biotics pro­­ponents, in Figure 2 a whole bunch of them with many Y‑shaped cells, and here a por­trait of B. adolescentis. Note that in the images shown here, but also in others found in the litera­ture, the Y-shaped Bifidobacterium cells are always terminal in filaments. 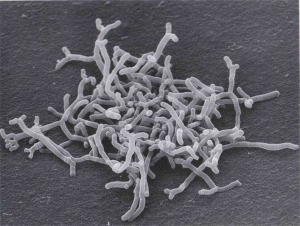 Dhanashree et al. (2017) studied strains of eight Bifidobac­terium species by scanning electron micro­sco­py (SEM) for a possible prevalence of Y‑shape morphology. They conclud­ed that "the growth medium and di­fferent conditions (tem­pe­ra­tures, pH, salts) do play a major part in the pleomorph­ic morphology of the Bifi­do­bac­terium. ... Not all Bi­fi­do­bac­ter­ium have a bifid morphology, and only a very few are intrinsi­cally bifid‑shaped, such as B. ado­les­centis. It is well-demonstrated in this study that the intrinsic morpholo­gies of these bacteria are rod-shaped, and all but a few do not adopt the bifid form, even after exposure to stress con­ditions."

The Y‑shape of Bi­fi­do­bac­terium sp. therefore does not appear to be an intermediate morphology during the normal cell cycle, and in no way indicates a specific cell division mechanism (a PubMed search for papers on cell division in Bifidobacterium returned no hits). Except that the Y‑shape is apparently some kind of stress response by the bifidos, we don't really know why or how they do it. Also, to the best of my knowledge, it is nowhere de­scribed that the Y‑shape of the bifidos could be a first step in mycelium formation like, for ex­am­ple, in Streptomyces: the symmetric "arms" of the Y are always of the same length and very short in all available images.

Alphaproteobacteria of the family Rhizobiaceae like Ensifer meliloti (formerly Sino­rhizobium me­liloti, for­merly Rhizobium meliloti) are free‑living, motile, rod‑shaped soil bacteria that can form "dead end" sym­bioses with certain plants, for ex­am­ple with Medicago sativa (alfalfa or lucerne). A "dead end" for the bac­teria as endosymbionts in root nodules, specialized plant tissue, that after a multi‑step differentiation process end up fixing nitrogen (N2) while being nourished by the host. It is for the final stages (zones III+IV) of this endosymbiosis, when growth and cell divisions have stopped, that unusually elongated and Y‑shaped cells are observed in thin sections of nodules (see here). Compared to the already short "arms" of Bifido­bacterium Y‑shape cells, the arms of the Sinorhizobium Y-forms appear even shorter. They resemble the stubs at the ends of crossbones in an old 'Jolly Roger' flag of pirates. Only a small proportion of end-differentiated cells show this Y‑shape, and since these cells no longer proliferate it is not a regular intermediate morphology during the vegetative cell cycle of Sinorhizobium.

The terms "bifid" and "Y‑shaped" are sometimes used synonymously, and when these terms are mentioned in connection with pleomorphic cells (from Ancient Greek πλέω- (pléō-), more, and -μορφή (mor­phḗ), form/shape), it is usually an attempt to bring at least some scientific order into the jum­ble of shapes that one sees ─ usually as a minority fraction ─ in most electron microscopic structural stud­ies of bacteria (and if it's not simply due to maltreatment of the cells during prepar­ation for microscopy). Here is an ex­ample.

Brock & Edwards (1970) studied the fine structure of Thermus aquaticus ─ the "pro­vider" of Taq polymerase for the polymerase chain reaction (PCR) and member of the newly‑branded phylum Dei­no­coc­co­ta ─ by transmission electron mi­croscopy (TEM) and found that its "...cell division me­chanism resembles that of typical gram-negative bac­teria." Thermus aquaticus cells usually have a diameter of 0.5─0.8 μm, and a length of 5─10 μm. They have the typical layout of Gram‑negative cells with inner membrane (IM), peptidoglycan layer (PG), and outer membrane (OM). Filaments derived from trans­versally dividing cells have lengths that in some cases exceed 200 μm, and they often form bundles connected via fused OMs or even fused PG, in addition. However, Brock & Ed­wards (1970) observed that "T. aquaticus oc­ca­sion­al­ly formed swollen and rather pleomorphic cells. Figure 6 shows a section through a filament which has a distinctly bifid morphology" (see here their Figure 6). Just to repeat: these rare bifid Thermus cells are not a regular intermediate morphology during cell division.

I → Y → II ? A clear "no" for Bifidobac­terium bifidum and it's siblings. Also "no" for Sino­rhi­zo­bi­um (class Alphaproteobacteria). Stay tuned for the second part where I will look at Y‑shaped cells in Trepone­ma (Spirochae­tota), Spiroplasma (Myco­plas­ma­to­ta).