In part 1, I looked at Bifidobacterium bifidum to see if the occasionally observed Y-shape of these bacteria gives any hint on their mode of cell division ─ maybe long­i­tu­di­nal di­vi­sion? No, there is no tangible clue that they divide by splitting their Y be­tween the "arms", zipper-like. Here now I ask the question I → Y → II ?  to Treponema (Spirochae­tota) and Spiroplasma (Myco­plas­ma­to­ta).

The causative agent of syphilis, Treponema pallidum, belongs to the phylum Spirochaetota (for­merly Spirochaetes) together with Borrelia burgdorferii of Lyme disease (in)fame. Hand drawings of apparently Y‑shaped Treponema sp. cells in outdated ve­te­ri­na­ry text­books reflect the contro­versy at that time whether they divide transversally or lon­gi­tu­di­nal­ly. When transversally dividing cells remain entangled along their length axis or when several cells lie crosswise over each other, the slender Tre­po­ne­ma cells easily give the impression of a Y in the process of splitting to the cur­sory microscopist (here an example of Breznakiella homolactica cells that lie across each other). You can see in the heap of Treponema pallidum cells selected by ASM as #Mi­crobe­of­the­Month in September that the spiral-shaped cells are heavily entangled. But in this widely distributed elec­tron-microscopic image you will hardly suc­ceed in spotting cells in the process of division (I did not).

Treponema pallidum divides transversally approximately at midcell and not starting from its ends. This is the unambiguous result of ultra-structural studies of T. pallidum cells by Izard et al. (2009) using cryo‑el­ec­tron tomo­graphy (CryoET). Although their size (helically coiled, usually 6–15 μm long and 0.1–0.2 μm wide) prevent the observation of single T. pallidum cells in their entirety in one fo­cal plane by CryoET, the "tips" of the cells show complex morphologies with structures probably in­volved in host cell attachment (see here), while cell division approximately at midcell creates to­pological structures that are quite different from divisomes and septa of rod‑shaped cells like B. subtilis or E. co­li, which both divide by transverse bi­nary fission (see here). Bottom line: Y-shaped cells of T. pallidum are an observational artifact. 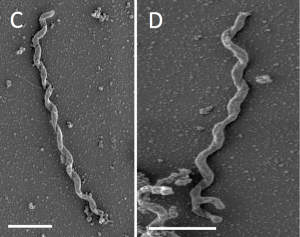 Both Treponema pallidum (Spirochetota) and Spiroplasma poulsonii (Mycoplasmatota) are long and slen­der, spiral-shaped cells with comparable dimensions (they slip through 0.2 µm filters, B. subtilis or E. co­li cells do not). But phylo­ge­ne­ti­cal­ly they're denizens of different continents of "planet bacteria." To illustrate this, both T. pallidum (genome size 1.14 Mb) and S. poulsonii (1.9 Mb) replicate their circular chromosomes from oriC, the single replication origin lo­cat­ed between dnaA and dnaN, triggered by the initiator pro­tein DnaA. However, the DnaA proteins of T. pallidum and S. poulsonii, with 31% identical re­sidues by BLAST, are even less similar than, for example, those of B. subtilis and E. coli (43%) that you know live on different continents, phylogene­tically.

Spiral shape formation occurs in Treponema and Spiroplas­ma in completely different ways. Similar to Borrelia, the Gram‑negative Treponema sports periplasmic flagella an­chored at the cell pole (see here in STC) that are mainly re­sponsible for creating and maintaining its helical cell shape by wrapping around the cytoplasmic tube and beating (within the periplasm). As Gram‑positives, Spiroplasmas lack an outer membrane (OM) and a peptidoglycan (PG) cell wall. In fact, together with the related Mycoplasmas, they are na­tur­al­ly occuring L‑forms (see here in STC). Lacking "support stockings", that is, a PG cell wall, Spiroplasmas evolved an intricate cytoskeleton built from the genus-exclusive protein Fibril and up to five variants of the bacterial actin homolog MreB. Harne & Gayathri (2022) favor the working model that Fibril, known to form long filaments upon oligomerization, supports propagation of kinks necessary for Spiroplasma movement by potentially transmitting the force generated by itself and MreBs to the membrane, while an intricate interplay of of the mreBs induce spiralilty during cell growth in the first place. An aside: also the Mycoplasma cousins of the Spirolplasmas made quite inventive use of their MreB for movement, as featured by Daniel here in STC. 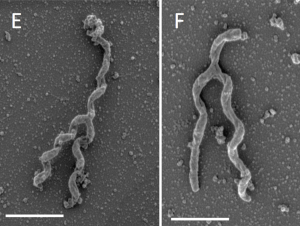 S. poulsonii is a maternally transmitted endosymbiont of Drosophila melanogaster that pri­ma­ri­ly pro­liferates in the fly's hemolymph. Typical linear bacteria have 5─15 helices (see Figure 1C), with a length in the range of 0.8─5 µm and widths ranging from 0.05─0.10 µm. For their study of its morphology under physiologically meaningful con­di­tions, Elodie Ramond and coworkers in Bruno Lemaitre's lab at the EPFL, Lausanne, Switzerland, used he­mo­lymph extracts from 1─2 week-old female flies of strain MSRO, since this time period corresponds to the ex­po­nen­tial growth phase of the endosymbiont. Upon staining with the nucleic acid dye SYTO9, freshly prepared S. poulsonii cells showed uniform fluorescence along their entire length, in both elongated (~70%) and Y‑shaped (~30) cells (see frontispiece).

Although not a "timeline" for a single Y-shaped cell in the strict sense, the observation of nearly all possible and always symmetrical "arm lengths" in the scanning electron microscope (SEM) sug­gested to Ramond et al. (2016) that these were indeed actively growing and dividing cells (Figures 1+2). Note that the elongated cell (Figure 1C) has the same length but approximately half the width of the Y‑shaped cell (Figure 1D); this is not as evident in the two cells shown in Figure 2. though. They could confirm by transmission EM (TEM) the equivalence of both "arms" of the Y‑shaped cells with respect to cytoplasmic content (Figure 3G,G'), and the presence of two FtsZ clusters in the "armpit" (Figure 3H), indicative of the typical septal anatomy of dividing cells (the cell outline is bare­ly visible on this image though).

Spiroplasmas are notoriously difficult to manipulate genet­ically, but it would be necessary for a fully valid demonstra­tion of longitudinal cell division starting from one end to be able to trace the localization of oriC or the terminus during the cell cycle by fluorescently-labeled proteins. Among the Spiroplasmas, a zipper-like cell division may be unique for S. poulsonii. Few other species have been thoroughly stud­ied for cell division, but Garnier et al. (1984) had found by electron microscopy in Spiroplasma citri transverse division of longer filaments into cells with "unit lengths" of two he­lical turns (see here). They did not mention finding Y-shaped cells in their samples.

I → Y → II ? "Yes", in the case of Spiroplasma poulsonii, but "no" for the other bacterium consid­ered here, Tre­po­ne­ma pallidum, and for Bifidobac­terium bifidum and Sinorhizobium meliloti con­sidered in part 1. Fully conclusive evidence for S. poulsonii is still pending, but Y‑shaped cells of T. pallidum are an observational artifact. Often Y‑shaped Bifidobacterium cells seem to be a stress response but are certainly not regular intermediate morphologies during their vegetative cell cy­cle. Occasionally Y‑shaped Sino­rhi­zo­bi­um me­li­lo­ti cells are final-stage bacteroids that do not di­vide any more. My survey is done for the time being, that is, unless you point me to another "Y‑shap­ed" bacterium that I ─ slightly embarrassingly ─ over­look­ed.

But wait, we had more longitudinally-dividing bacteria just recently! (Spoiler: no Y-shapes were in­volved there).