If you are interested in any subject related to small molecule natural products of microbial origin, the "John Innes/Rudjer Bošković Summer School in Applied Molecular Microbiology" is for you. I know that course name is a mouthful so when I am describing the school to microbiologists, I refer to it simply as the "Dubrovnik School." But the full name deserves some explaining because there­in lies much of the history of the course. In 2007, the first in this series of summer schools was held thanks largely to the efforts of three individuals, David Hopwood, Julian Davies and Dušica Vujaklija (aka Duška). The three had many interactions discussing the creation of a summer school. David (from the John Innes Centre in Norwich, UK) had developed a liking for Croatia, in great part through his knowing Duška (from the Rudjer Bošković Institute in Zagreb, Croatia) who in turn had done a post-doc with Julian (at University of British Columbia, Canada). When it came to deciding where to hold a school, Croatia quickly won over the UK and Canada. The first school was held in 2007 at MedILS (Mediterranean Institute for Life Sciences) in Split. The school was an immediate success. But it also became clear that MedILS was too small a venue to house all the students and faculty at one location. The search was on for a different location. 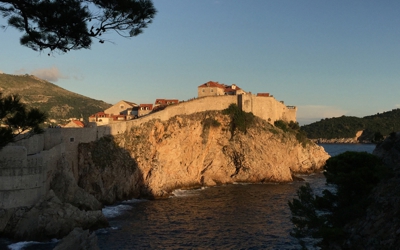 Luckily for the school, the organizers found a perfect site in the historic city of Dubrovnik. Less than 500 meters from the Old City's walls, a large building houses the Inter-Univer­sity Center (IUC). Sadly, during the Croatian War of Indepen­dence in the early 1990s the building was bombed and bad­ly damaged by the ensuing fire. But as a silver lining, when the building was reconstructed, they added a top floor with a modern dormitory. This, together with a few apartments in the IUC building, provided enough accommodation for forty-five students and around a dozen faculty, perfect for the summer school. Since 2008, the Dubrovnik School has been held at the IUC every two years (with the exception that in 2020 the school was held online due to the pandemic). I have been fortunate to be part of the school since 2010. The course covers many and diverse topics in small mole­cule natural products, including novel compound discovery, biosynthetic pathways, ecological roles, industrial fermenta­tion, and strain improvement, to name but a few. A full de­scription of the 2022 course can be found in the online re­port. The course format includes lectures, small group dis­cussions, poster sessions, and a computer workshop fo­cused on structure predictions from gene sequences. Re­cently, we have included flash talks by the students where they provide a quick incentive for everyone to visit their posters. For the eight days of the school (which includes a mid-week excursion day) the interactions among all parti­cipants are what makes the course particularly attractive. Thanks in large part to David and Joyce Hopwood's strong egalitarian tradition, everyone is treated equally. There never was any referring to the senior members as "Sir David" or "Lady Hopwood." Not at all! From the very first lecture the welcome message includes the directive that everyone is on a first-name basis. This friendliness very quickly melts away any walls that separate students from faculty. This faculty is particularly special because of their love of teaching and interacting with students. 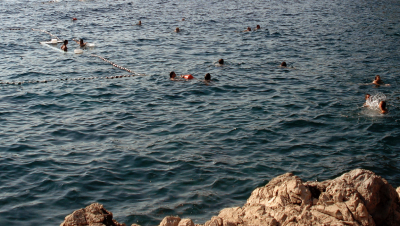 Personally, I have a favorite activity beyond the classroom, group discussions, and poster sessions. Epitomizing the ca­maraderie that quickly forms among all participants are the early morning and afternoon swims in the crystal-clear wa­ters of the Adriatic. Less than a five-minute walk from the IUC building there is a beautiful swimming hole. While the Old City is almost always packed with tourists, this swim­ming location is a well-kept secret frequented mostly by locals and those lucky enough to be staying at the IUC. As you can see from the photograph, at this special location, students and faculty spend much time swimm­ing (and thinking) outside the (water polo) box. These moments are unforgettable and have a magical feel­ing. Thinking outside the box is the norm at the Dubrovnik School.

After the 2016 edition of the school, having masterfully led the school six times, David and Joyce made the decision to pass the baton of school leadership to Mervyn and Maureen Bibb. Always aided by Duska's savvy regarding Dubrovnik, the 2018 and 2022 editions have been wonderful ex­periences for all. Still, we all miss having David and Joyce there. In homage to their friendliness, spirit of scholarship, and strong enthusiasm that made the school the success it is, I end this post with the group photograph from 2016. Continuing in their tradition, I am sure this summer school will have a long life. I am very much looking forward to Dubrovnik 2024!

Class of 2016, with David and Joyce at the center. Photo credit: Greg Challis