STC's longtime readers know that we "emphasize the unusual and the unexpected pheno­mena for which we have a special fascination." And in fact, there are so many exciting troves in the recent scientific literature ─ and in the older no less! ─ that we could easily blog three times a week... at least. But there are, occasionally, dregs of garbage we have to bite through. Here's a more trivial example pointed out to me on Twitter by Dieter Vandenheuvel from Universiteit Antwerpen, Bel­gium. 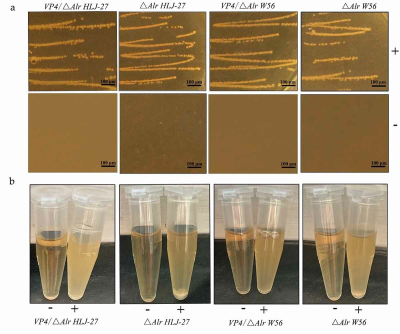 In the journal Virulence, from the renowned scien­tific pub­lishing house Taylor & Francis, a peer-reviewed stu­dy was published this August evaluating "...the immuno­geni­city of auxotrophic Lactobacil­lus with CRISPR-Cas9D10A system-mediated chromosomal editing...". Without going into the details of this multi-author study, let me present to you here their "Figure 4".

A clear result, the genetically changed lactobacilli grow only in the presence of D-alanine, as the authors expected. Ex­cept, it's not so clear. Click on the figure and you see in the popup the image dupli­cations detected by Dieter Vanden­heuvel. As he said on Twitter:"Yes, I do think that fraude in figures totally undermine the value of your scientific publi­cation. Until you fix your (in­voluntary) mistakes, I'm chosing to not believe in the validity of your science." I concur. And, sure enough, the editors of Virulence were notified.

Whether this was an acceptable "honest mistake" during the pre­paration of the manuscript, or a deliberate deception, fraud, we might never find out. As of late November, a different version of the Li et al. (2022) paper is now online on the journal's web­site while still giving 'August 03' as pub­lishing date. Without mentioning the update, this ver­sion now contains a significantly revised ver­sion [error404 as of 01/25/2023] of the "Figure 4" discussed here. Such a pro­ce­dure, the exchange of indexed material, would not have been possible with the old-fash­ioned pub­lication of printed journals. It was common prac­tice back then ─ and by no means a loss of face, albeit occasionally a cause for gossip ─ to an­nounce corrections in later volumes. In this instance there's no easy way of determining that the image was replaced. You only notice this opaque publication practice if you find 'December' as the month of publication of this paper in PubMed.

Since I have come to also feature work from preprints and not exclusively from peer‑reviewed pa­pers, let me assure you that I take great care to evaluate the plausibility of figures although some­thing certainly could still slip by me. Critical reading is always in order. This of course also applies to my own posts. 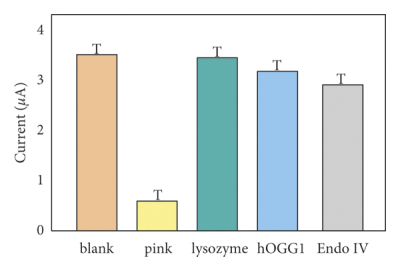 Addendum  And then, besides what I rantingly called gar­bage, you can occasionally come across super-funny stuff in illustrations of scientific articles. Data scientist Jo­se­mari Fe­liciano (@SeriFeliciano) pointed out on Twitter the illustra­tion you see here to the right. It stems from a paper pub­lished in the Journal Advances in Materials Science and En­gineering by Hindawi. I marvel at the creative use of the ca­pital T to mark the standard deviation in the bar chart. In­terestingly, the calculated standard deviations for the indivi­dual catego­ries/bars were always identical (read here to learn how the story unfolded over the last week).