Just over five years ago, George O'Toole and I had a conversation about scientific publishing which we posted in STC. After some harsh comments critiquing for-profit scientific publishers, journal im­pact factors, and predatory journals, we turned to thinking about solutions. George indicated some guarded enthusiasm for the then-budding preprint model of publishing. His main concern was the uncertainty as to how preprints would be reviewed in a meaningful way. As for me, I ex­pressed my strong liking for the transparent and constructive review process at eLife (where I was reviewing editor during its first three years of existence, 2012−2015). Elio also found a breath of fresh air in the review process at eLife, calling it a "humanized journal." 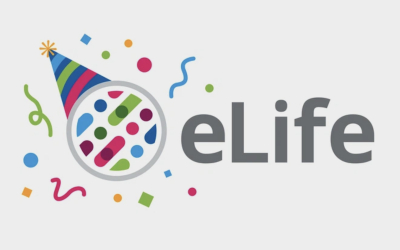 The ten-year edition of the eLife logo by Rowena Walton. Source

Let's party; there's reason to celebrate! Coinciding with its tenth anniversary, eLife recently made some import­ant changes to its publishing practices. Last year the journal began review­ing only articles that were publicly available as preprints. Now the journal has announced what I consider a big and important next step in the evolution of scientific publishing: eLife is eli­minating the accept/reject decision at the end of the peer-review pro­cess. Starting in 2023, all papers that undergo peer review at eLife will be published in the journal's website, along with an overall assessment and public reviews. This will be re­ferred to as a "reviewed preprint." The authors are then free to proceed as they wish. They might respond to the com­ments and submit a revised version. Or they may submit the peer-re­viewed work to a different journal. At any time after the initial review, including after revisions and resubmission, the authors will be able to declare the paper final. This will lead to the generation of a "Version of Record" that will be indexed in PubMed. To me this is monumental, no longer will there be accept/reject deci­sions after peer-review. The control of a paper's fate is no longer in the hands of an editor but in the hands of the authors, where it should be. This is the type of change that scientific publishing needs and I more than welcome eLife's decision.

From the early conversations I have had with numerous scientists, there seems to be widespread enthusiasm for the reviewed preprint way of publishing. Importantly, several funding organiza­tions already support of the use of reviewed preprints in research assessment. But, of course, there will always be hold­outs. The following final few words are directly aimed at those still hell-bent on publishing in the CNS tri­nity. Give it up! Remember that CNS once stood simply for "cen­tral nervous system" and still should. Stop spending your time, energy, and resources is such wasteful, outdated, and non-inclusive models of publishing. Stop thinking so much about where you publish and focus on what you publish. It will be much better for you and your health. And infinitely better for the advance­ment of science.