« The Who-Ate-Whom of Terms in Biology: Virovory | Main | A New Look and Other Changes »

Last week, my enthusiastic feelings for the beginning of the new year were greatly dampened when I received the news of Chris Walsh's untimely death, the consequence of a fall. Many of us fortunate enough to have known and interacted with him for many years are still processing this shocking news. Few scientists have so profoundly influenced my career as Chris. 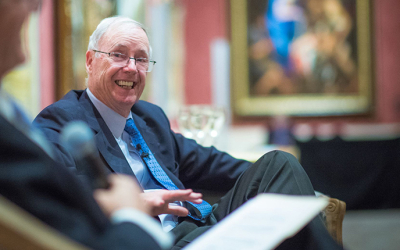 Chris, a native of Boston, spent almost his en­tire career in the area. After obtaining his Ph.D. at Rockefeller University in New York, he re­turned for postdoctoral training at Brandeis University. In 1972, at age 28, he started as an Assistant Professor at MIT with a joint appoint­ment in Chemistry and Biology and became Chair of Chemistry within ten years. He moved to Harvard Medical School in 1987 to head the newly formed Department of Biological Chem­is­try and Molecular Pharmacology. He transi­tioned to Professor Emeritus in 2013 and then moved to Stanford to be part of a new Chemi­cal Biology effort there as Adjunct Professor and to be closer to his daughter and grandson. Along this illustrious path he published more than 800 scientific papers and several books! The first of his books – the nearly 1000-page Enzymatic Reaction Mechanisms – he published at age 35 and became the bible of enzymology. (Like Elio, Chris joked that he "suffered" from hypergraphia. He once told me that he had written a book "over the past week.") His passion was always enzyme reactions – he could "push electrons" along catalytic sites like no one else. And yet he truly appre­ciated and clearly communicated the biological context of every enzyme reaction he studied. His contributions covered innumerable areas, most of them related to microbes. The biosyntheses of peptidoglycan, antibiotics, siderophores, co-factors were prime targets of his discovery efforts, along with elucidating the mechanism of antibiotic (primarily vancomycin) resistance. Reading his reflections will leave you in awe of his accomplishments. But the person was so much more than his achievements.

I first met Chris soon after he joined Harvard Medical School in 1987. He reached out to me to in­clude me in his plans to build a structural biology center with a strong emphasis on NMR ap­proach­es to study protein structure. That was the beginning of a series of productive collabora­tions – evidenced by twelve papers we co-authored – that lasted for more than a quarter of a cen­tury. Over the years, several of our students and post-docs spent time in each other's lab, at times we held occasional joint group meetings, and he and I routinely sat down to simply chat. All along he guided my thinking both scientifically and personally (even providing sound advice about in­vesting for retirement!). He was among the first to congratulate me on getting tenure (I am sure that his confidential opinion helped the process) and put things in perspective when he said: "Te­nure is something that only matters before you get it." Regardless of how busy he was – and he was usually incredibly busy – he always made time to get together. And when we talked, his at­tention was fully on our conversation, and he invariably proved wise in his comments.

To end, I'll relate how I came to learn about Chris' undergraduate research. It was 2007, twenty years into our friendship. As I read E.O. Wilson's autobiography Naturalist, I was pleasantly sur­prised to learn that Chris, as an undergraduate, had purified the fire ant "trail substance," one of the first insect pheromones studied. As a result, Chris got a first authorship in a Nature paper published in 1965. And he got a lot more. As Wilson describes it, the work entailed collecting hun­dreds of thousands of fire ants – every one intent on stinging their captors. "We took scores of stings on our hands, arms, and ankles, each of which produced an itching welt. A day or two later, many of these sites erupted into white-tipped pustules. I suspect that my distinguished colleagues resolved then and there to stay with laboratory biology." Maybe. But I could see that same intrepid undergraduate in action as I marveled at how Chris took on scientific and executive challenges throughout his career. He handled these in such a humble manner that I often learned of his achievements not directly from him but from others. Such was his nature. I shall remain forever grateful to have had his friendship.