Like with the customary New Year's Eve fireworks, every year we biologists are blessed with hith­erto un­known or largely uncommon scientific terms. Some stick, others blaze away like said fire­works. How would you guess the term "virovory", added to Wikipedia on 29 December 2022, will fare? 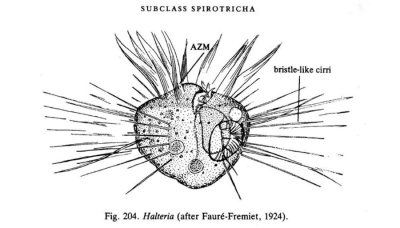 What does the term "virovory" entail? From Latin vorāre "to swallow up", to "devour"(!), to eat something for one's nour­ishment, and with what you eat as prefix. Like "carnivore", meat eater. So, a "virovore" is someone who turns the table and – who eats whom? – eats and thus kills viruses instead of getting infected by them and killed, eventually.

When you think of creatures that could be "virovores" in terms of their diet, our small single-celled relatives, the pro­tists, come to mind. I had once called them "omnivores" be­cause they gobble up everything that feels and smells about right by phagocytosis. And this everything includes viruses and bacteriophages, of course, the most abundant bio­logi­cal entities on our planet, in soil, surface water and in the seas.

Since the early 1990s, it has slowly become clear that protists do not simply phagocytose viruses and phages in addition to bacteria, other protists and particulate matter, but digest them as food (citations in Deng et al. (2014)). However, researchers saw no need to talk of "virovory" then as they assumed that viruses and phages are calorically unimportant and play at most a minor role in the nutrition of protists. Just as nibbling a muesli bar cannot substitute for a five-course menu, vegan or not. 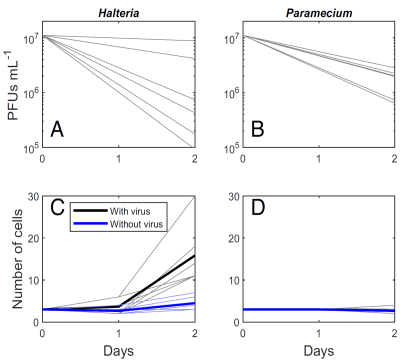 Enter Halteria, an abundant freshwater ciliate with worldwi­de distribution (Figure 1). They are comparably easy to cul­tivate in the lab but are tricky to observe microscopically. It is possible that observations of Halteria date back to 1677 when Antonie van Leeuwenhoek described an animalcule he saw in an earthen pot full of rainwater: small, swift, and seen to stand still before quickly changing direction and travelling straight. To quote Richard L. Howey: "Halteria grandinella has, around its midsection, a number of long, spine-like structures which appear to act like springs and often just as you are focusing in on a specimen, it will go bouncing out of your field of view." Also Robert Berdan, the photographer of our frontispiece today, complained: "This organism can move hundreds of times its body length in less than a second and often disappears out of the field of view when observing with a light microscope."

Halteria sp. Are considered bacteriovorus heterotrophs, but DeLong et al. (2023) demonstrate in their recent study that these grazers can also thrive on a "viral diet" alone. They fed chlorovirus to Halteria sp., and to P. bursaria, P. caudatum, and Euplotes sp. as controls (Figure2).

You need to know that chlorovirus (short for 'Chlorella virus') infect and kill unicellular Chlo­rella-like green algae, called zoochlorellae, and are mostly species- and even strain-specific. The viruses cannot – or very inefficiently – infect zoochlorellae when they thrive as endosymbionts, which is often the case, in protists as Paramecium bursaria, Hydra viridis, and Acanthocystis sp., to name a few, and which themselves are immune. Chloroviruses come as spheres with diameters of 100 to 220 nm. Their proteinaceous capsid is covered by a single lipid bilayer; here you can see an image gallery of chlorovirus PBCV-1, it's like a user manual with product specifications. They have a li­ne­ar, usually single-copy, dsDNA genome of ~330 kb. Compared to the slender lambda bacterio­pha­ges (capsid diameter 50–60 nm, tail length ~150 nm, genome length ~48 kb), chloro­virus particles are more like a XL muesli bars, and thus hardly "ca­lo­rically unimportant." 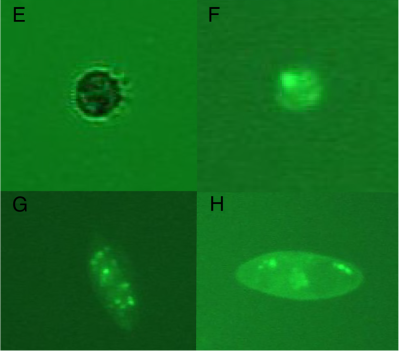 Figure 3. Fluorescent micrographs of ci­li­ates fed chloro­viruses show Halteria with visible light (E) and with fluorescently la­beled virus given as food (F). Two other ci­liates, Euplotes sp. (G) and Paramecium caudatum (H), also show the indication of virus uptake. Aggregations of viruses are visible in the inside of vacuoles. Source

In the experiment, all protists took up the chloroviruses af­ter a short time, accumulating them in their vacuoles (Figu­re 3). While the virus titer dropped by one order of magni­tude in the six repli­cate Paramecium micro-cultures (400 μL) after two days (Figure 2B), the cells could not me­­tabolize the "virus load" of their vacuoles for their growth and divi­sion (Figure 2D). By con­trast, the virus titer had dropped by one-to-two orders of magnitude in the Halteria sp. micro-cultures after two days (Figure 2A), and the cells metaboli­zed the "virus load" from their vac­uoles, grew, and doubled (Figure 2C). The authors give no clues as to why their Halte­rias dif­fered in appetite. Note that the number of cells in the micro-cultures hardly increase for either protist when they were fed with a filtrate (0.1 µm) of the virus prepara­tion.

The gross growth efficiency of 17% for a trophic interaction between Halteria sp. and chloro­virus that DeLong et al. (20­23) determined by modeling (Figure 4) compares favorably with gross growth efficiencies estimated for other aquatic consumers, which range from 10% to 30%. This is convinc­ing even though they measured growth in repli­cate cul­tures for only 2 days. This allowed for one doubling of the Halteri­as, on average, but since they gobbled up the viruses so avidly – the authors calculated some 104 to 106 viruses per day per Halteria cell – the experiment probably could not be continued any longer without replenishing the "food tray". For a longer or continuous cultivation, there is no simple method for determining the virus titer in real time in order to adjust the food supply in relation to consumption.

Instead of modeling growth efficiency, the authors could have measured it, for example, with a Hershey-Chase-type experiment: detection of nucleotides and amino acids derived from the di­gestion of labeled virus in the ribosomes (rRNA and protein) of the Halterias. But given the small number of protists in their growth experiments, this would certainly have been quite tricky. 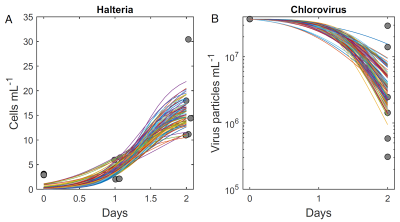 Figure 4. Predator–prey dynamics of Hal­teria foraging on chloroviruses. Halteria grew in abundance (A) as it decreased the abundance of chloroviruses (B). Indi­vidual colored lines are separate boots­trapped model fits. Source

There is a good reason why the term "virovory" will not end up in a bin labeled "extravagan­zas" soon. Let me explain. An important parameter of all current models for food webs in aquatic habitats – and more recent­ly also terrestrial ones – is the so-called "viral shunt". It is the mechanism that pre­vents microbial particulate organic matter (POM) from mi­gra­ting up trophic levels by recycling them into dissolved organic matter (DOM), which can be readily taken up (again) by microorganisms. In their classical 1999 paper, Curtis & Suttle estimated that as much as 25% of the primary pro­duction from phytoplankton in the global oceans may be recycled within the microbial loop through the viral shunt. If, as DeLong et al. (2023) have now shown, members of the protist fraction of the zooplankton are not only decimated by viruses but readily use them as food source, then on a global scale this would lead to a yet-to-be-quantified "quenching" of the viral shunt. Quantification, even approximate, of course requires that protistologists gain a better un­derstanding of which protists other than Halteria sp. are capable of virovory at all – Euplotes sp., Paramecium caudatum, and Paramecium bursaria at least not for the particular chlorovirus used here. A horrifyingly huge test matrix, with all the thousands of known protists and the plethora of their viruses, to be sure. And this is the elephant-in-the-room hidden in the paper's final sentence: "Our results suggest that virion persistence in the environ­ment depends not only on environmen­tal factors but also on grazing by predators. It is therefore possible that grazers exert selective pressure and influence the evolution of viral phenotypes in a way that interacts with pressure on viruses to effectively infect and replicate within hosts. At this point, however, the evolutionary ef­fects of grazing on viruses are unknown."